Volvo Ocean Race. They’re Off At A Blistering Pace Too 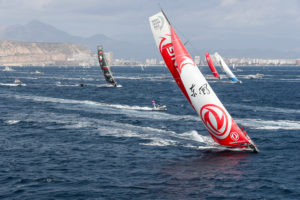 Dongfeng led the fleet out of Alicante.
pic by Ainhoa Sanchez/Volvo Ocean Race 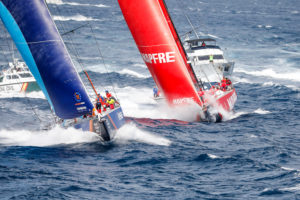 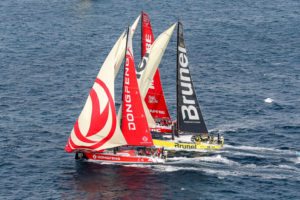 The incident which created the penalties for Brunel & MAPFRE.
pic by Ainhoa Sanchez/Volvo Ocean Race 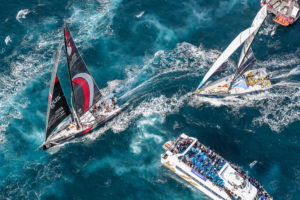 Threading their way through the spectator fleet.
pic by Ainhoa Sanchez/Volvo Ocean Race 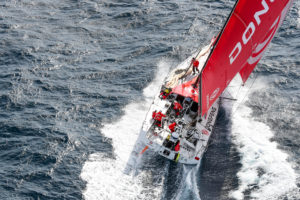 Having inflicted penalties on here two closest rival Dongfeng was off like the proverbial ‘robbers dog’.
pic by Ainhoa Sanchez/Volvo Ocean Race

The start was a great spectacle for both good and not so good reasons.

The photography on the livestream coverage was simply superb, but the boat handling and some dubious tactics and sail handling around the cans off Alicante asked questions as to whether these really were the best sailors in the world!

I am prepared to overlook those as simply being part of the pre-start nerves and the desire to be at the front as the fleet set off on the first leg of the 45 000nm race around the world.

So close was the racing at times that it was inevitable there would be a penalty at some stage, and this came when Dongfeng defended her position and the umpires penalised both Brunel and MAPFRE who both had to ‘do their turns’.

The shenanigans that has plagued the AkzoNobel team for the past week took another dramatic twist late on Friday when Simeon Tienpont, after an arbitration process, took back the skipper role from Brad Jackson who hours earlier was in front of the worlds media at the skippers press conference.

The team made this announcement: “Following extensive discussions, we are pleased to announce that team AkzoNobel will be starting the Volvo Ocean Race today under skipper Simeon Tienpont.”

Brad Jackson (NZL), Jules Salter (GBR) and Joca Signorini (BRA), decided not to sail the first leg and are considering their future plans whilst ensuring that the boat is ready to race today and assisting AkzoNobel to achieve its goal. Rome Kirby (USA) also decided not to sail.

One wonders whether this is the last we have heard of this unsavoury incident – time will tell. The support for this team must have waned significantly?

Conditions couldn’t have been better for the start in Alicante, Spain on Sunday afternoon. The bay off the Alicante sea front was crowded with hundreds of spectator boats, and the fleet even threading their way through them to get free before settling down to the seriousness of the race. This was some of the most intense racing ever seen in the opening minutes of a Volvo Ocean Race.

The highlight came on the approach to the final turning mark before leaving the bay, when Dongfeng Race Team came screaming in on a collision course with Team Brunel and MAPFRE, both of whom were forced into a quick gybe to avoid the right of way Chinese boat.

Separated by less than a metre at times, as they went through their manoeuvres, the on water Umpires judged neither Brunel nor MAPFRE had kept sufficiently clear and penalised both, pushing them back down the fleet.

“This is going to be such a close race, every metre counts,” Dongfeng skipper Charles Caudrelier had said before the start. “We know we will be fighting all the way to the finish.”

After winning round one of the fight, Dongfeng then sped off with the lead, with Sun Hung Kai/Scallywag, Vestas 11th Hour Racing and Turn the Tide on Plastic in close pursuit. All three would thread their way through the spectator fleet, at times within an arm’s length of the astonished guests, before finding a clear passage out to sea.
Dongfeng Race Team unveils crew for Volvo Ocean Race Leg 1

“Today, I think I have my dream team. We have sailors from all around the world and I think we have really managed over the last six months to build something strong together, with trust and full respect for each other” said Charles Caudrelier.

With the intensity of the start now something in the past, the teams have a 1400nm short leg to Lisbon to settle down into their watch routines and life on board before the long leg to Cape Town starts. It’s gong to be close racing all the way around the world, so watch this space as we have one heck of a tough race ahead of us.