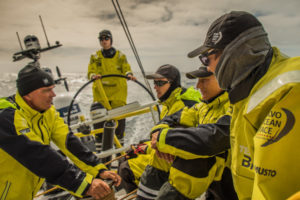 Team Brunel went into stealth mode yesterday so her actual position will only be known at the next ‘sched’ later this afternoon.

It is going to be interesting to see what her tactics were during her stealth period, and whether she has made a radical move that will catch the fleet unawares.

Or was it a move simply to unnerve her closest competition?

As everything in this race, only time will tell.

Abby Ehler gave an update from the boat shortly after the start of stealth mode period, saying “I think most route programs suggest that the Northern route is the best route to go. Capey, our navigator would like to go to the south. Bouwe (Bekking), Peter (Burling) and Capey (Andrew Cape) had a long discussion over the last weather update this morning, I think just by going blind to the rest of the fleet, it kind of keep them guessing about which option we choose and where we are going. We hope that the rest will not come with us and that we are the only ones for this chosen route.”

Skipper Bekking was satisfied with the second position. “Mapfre has done a nice job, but we can’t complain either. Positioning ourselves in such a way to make gains when possible. But it’s still a mix of gains and making some moves to consolidate the position. Like Sunday morning, when we gybed, making a course away from Cape Town.”