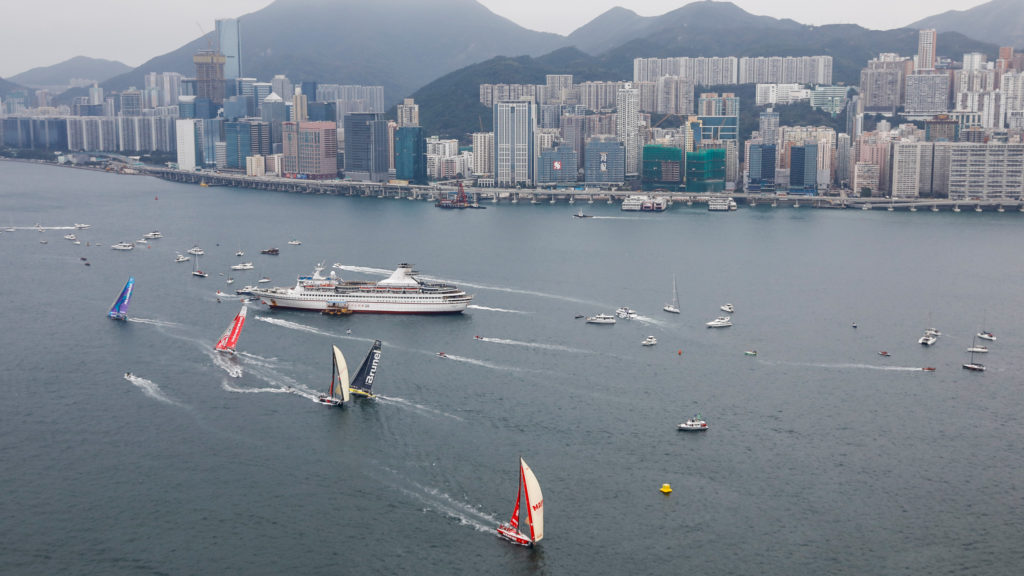 Leg 6 to Auckland takes the teams on a 6,100 nautical mile race to the City of Sails.

The fleet will start by crossing the South China Sea to the northern tip of the Philippines. After that, it’s out into the Pacific and a long drag race to the south-east, dodging the many island chains of Polynesia until they reach Auckland.

It’s another leg that will be dominated strategically by the north to south transit of the Doldrums, which proved so decisive on Leg 4 into Hong Kong. And of course, the final run in to Auckland, down the east coast of New Zealand has seen many classic match races over the years, as the fleet finishes in the City of Sails.

MAPFRE, the overall race leader, will cross the start line to Auckland with a four-point lead over Dongfeng Race Team. With another Doldrums crossing looming, both skippers see the potential jeopardy in the leg.

“The leg to Auckland is what I call a tricky leg,” said Dongfeng skipper Charles Caudrelier. “We have to cross the Doldrums and we know it’s complicated and a bit random and we’re concerned about being the guys who catch a bad cloud this time.

“But it’s also one of the best legs as you arrive in Auckland which is a fantastic place where people really know offshore racing and love the race.”

Spanish skipper Xabi Fernández knows first-hand the challenge the Doldrums pose, as on Leg 4, a solid start to the stage turned into a losing battle with clouds and a disappointing result.

“We all know how hard the Doldrums can be and last time, for us it was even harder,” Fernández said. “We found ourselves a little bit separated from the leaders and for 10 or 15 hours it was painful as we watched the others sail away…”

The forecast for start time on Wednesday morning in Hong Kong is for a 12-15 Northeasterly wind, ideal conditions to get the fleet on their way to Auckland. But as the fleet gets into the leg, stronger winds are forecast over the first days.

“It’s always notorious this bit,” said Turn the Tide on Plastic skipper Dee Caffari. “I remember from the last edition when we left Sanya (China) we had similar upwind, strong conditions through the Luzon Strait. So it’s the same again this time.

“It’s also a bit deceiving as we almost sail away from New Zealand before we put the bow down and make that commitment and head down there. So psychologically it’s a hard leg as well.”

This will mark the 11th time the race has visited New Zealand and the 10th time it has stopped in Auckland. Many will look at New Zealand as a spiritual home to the Volvo Ocean Race, with over 350 Kiwi sailors having taken part in the race dating back to 1977.