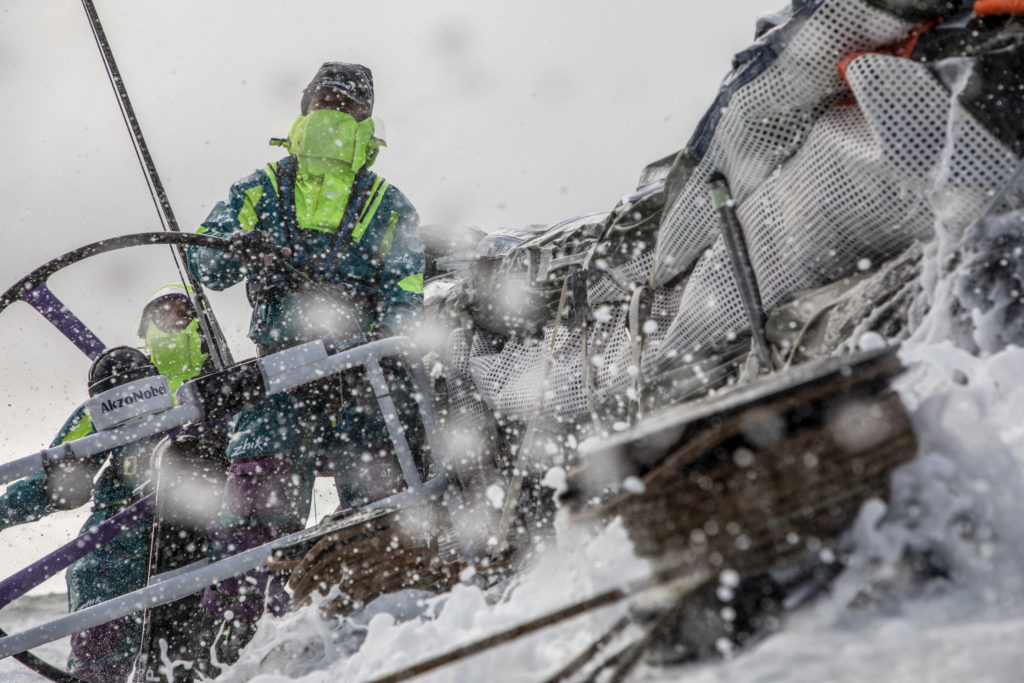 Four days into Leg 7 of the Volvo Ocean Race, the teams have reached the Furious Fifties and made their turn to the east, pointing towards the famed Cape Horn. There has been little let-up for the seven teams as they continue to push ever deeper into the Southern Ocean.

Vestas 11th Hour Racing posted the first 500-mile run of Leg 7 on Wednesday as the fleet charges towards the ice exclusion zone. 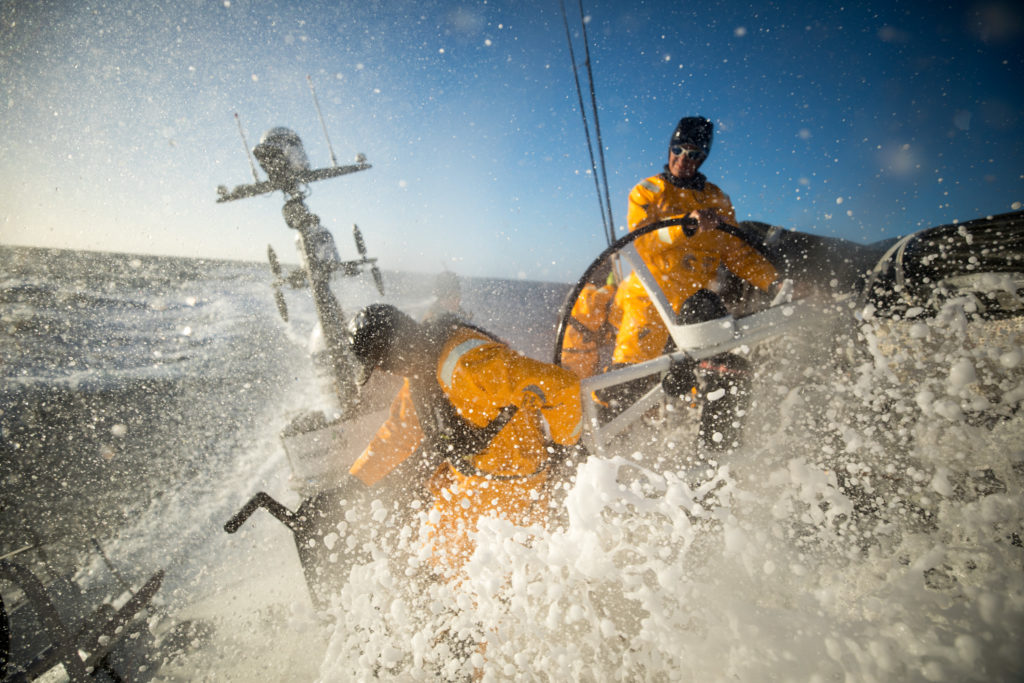 Dee Caffari aboard Turn the Tide on Plastic sails south through the roaring forties.
Pic by Sam Greenfield/Volvo Ocean Race

Until now the race has been to get due south as fast as possible to skirt round the bottom of a big anticyclone, but today the teams – split on the water by 25 miles – started to swing round to the east as the ice exclusion zone quickly approaches.

The shortest, and therefore technically the quickest, route will see the fleet bounce along the exclusion zone, put in place by race management to keep the teams away from Antarctica’s icebergs. 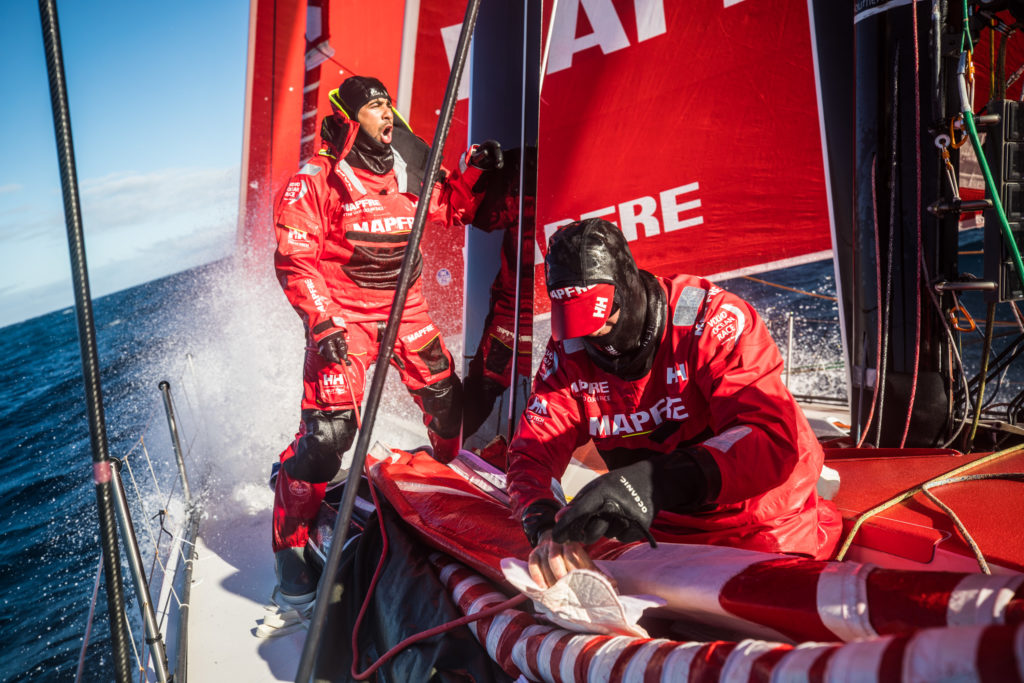 On board MAPFRE Guillermo Altadill is giving instructions while Antonio Cuervas-Mons sets up the new sail.
Pic by Ugo Fonolla/Volvo Ocean Race

At 1300 UTC Vestas 11th Hour Racing had slipped to second place, having surrender the top spot to team AkzoNobel as the fleet blasts east. 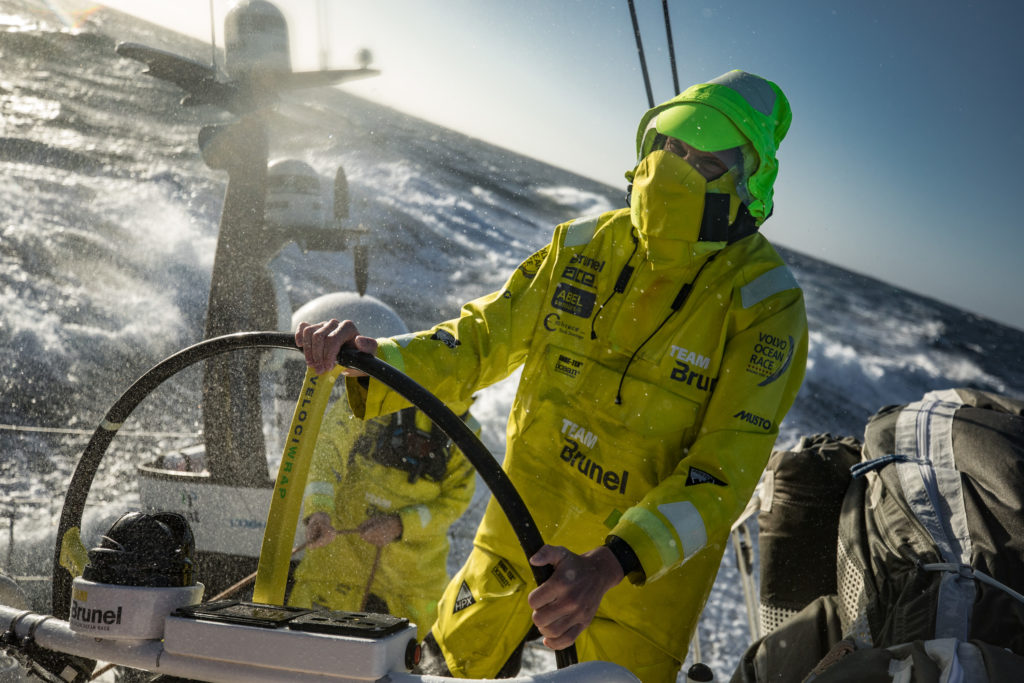 “It’s still pretty tight – we’ve got Dongfeng and MAPFRE coming at us pretty quickly at the moment, and we can see Brunel’s light up to windward,” Akzonobel’s navigator Jules Salter explained.

“Everyone’s doing 22, 23 knots so we’re really only 10 or 15 minutes apart from each other. The sea state and the wind is changing all the time, and we’re just trying to find the right combination for the sails. The guys on deck have a lot of work on.” 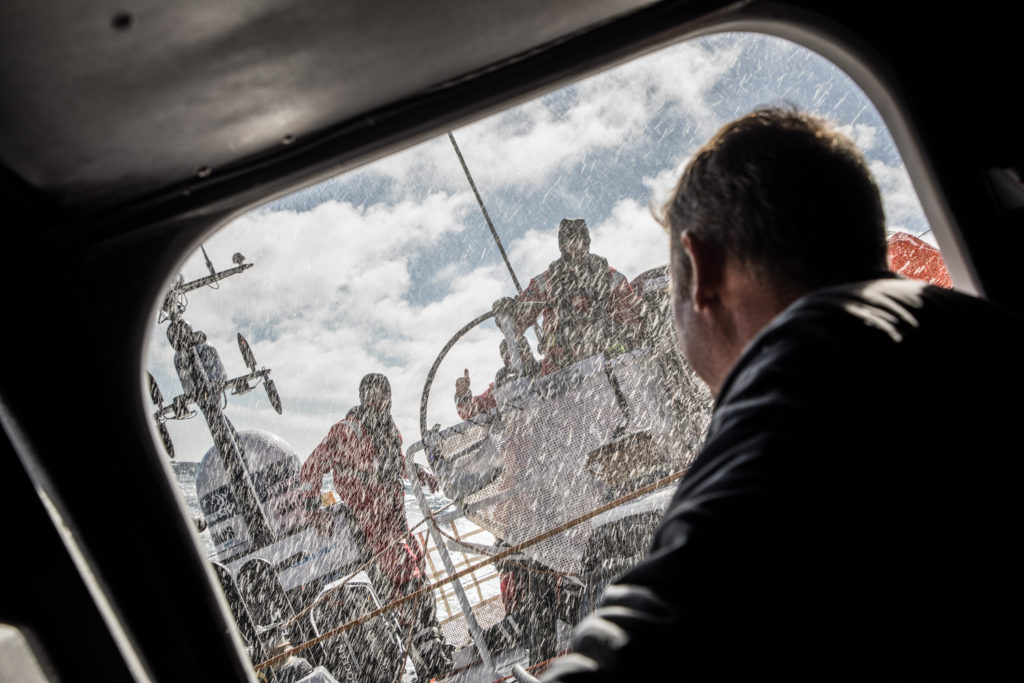 The next challenge facing the teams comes in the shape of a monster depression brewing to the south containing winds in excess of 40 knots.

“There’s definitely some more wind coming, that’s for sure,” Salter added. “We’ll also have to start doing a few gybes and that’s going to be pretty tricky in those big winds and waves. The hardest bit is yet to come.” 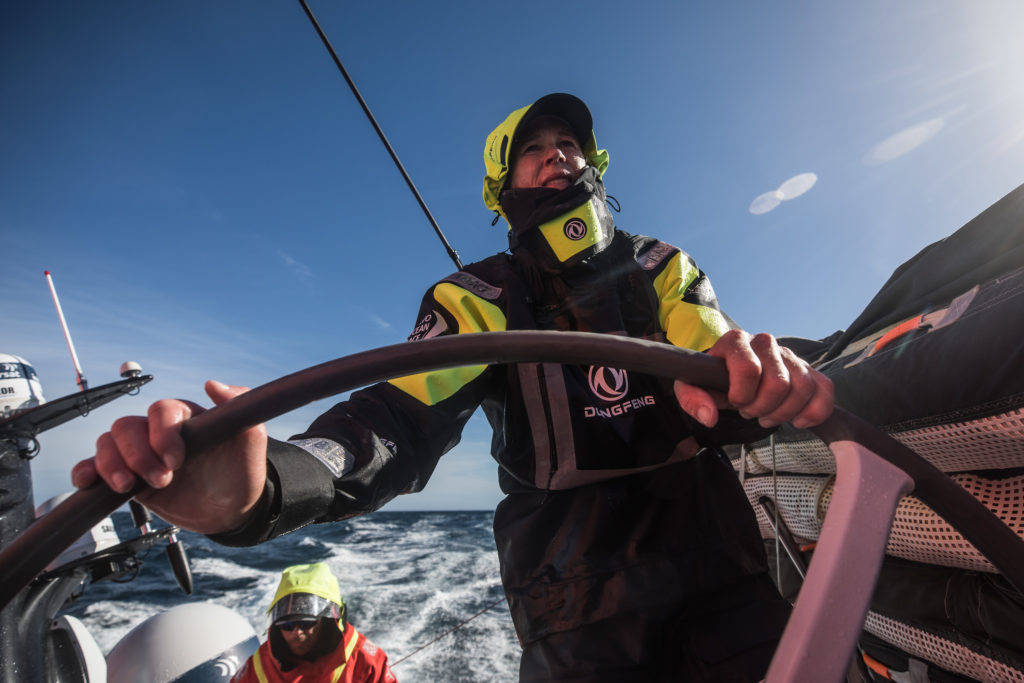 On board Dongfeng. Carolijn Brouwer is enjoying the drive under the sun.
pic by Martin Keruzore/Volvo Ocean Race

The impending storm is also at the forefront of Dongfeng Race Team skipper Charles Caudrelier’s mind as he spurs on his fifth-placed team.

“There will be five tough days to go until we reach Cape Horn,” Caudrelier said. “Five days is long in these conditions when you are close to the ice limit, in the coldest area, with many manoeuvres – it really is going to be very hard.

“We will really have to look after the boat and the sailors because there will be a lot of rough sea, a lot of wind and a lot of rotations. This is the worst because manoeuvres in these conditions and in the big seas are difficult, but we have no choice. This is it – the Great South.”

As well as living with the constant damp and plummeting sea and air temperature, Bouwe Bekking’s fourth-placed Team Brunel has had other issues to contend with.

“It just feels like there’s always something to do,” Abby Ehler explained. “We had a couple of breakages on the first day, we’ve got a little tear in the J2 and our AIS isn’t working, which is a real hindrance not being able to see the rest of the fleet. We’re working our way through all these mishaps.”

Each team will be working to get their equipment in the best shape possible before the big breeze forecast for the coming days. 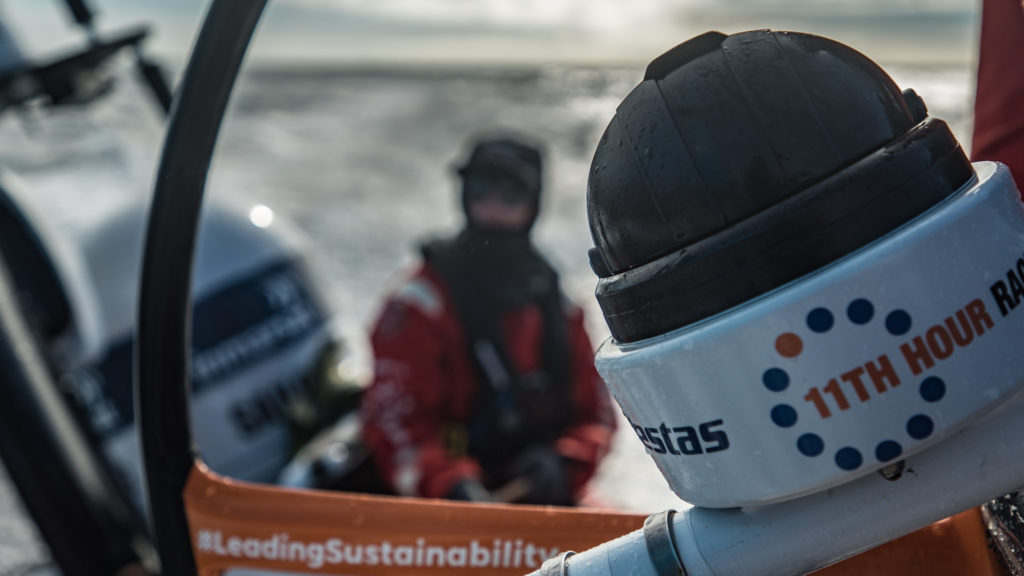 Aboard Vestas – the calm before the storm!
Pic by Jeremie Lecaudey/Volvo Ocean Race