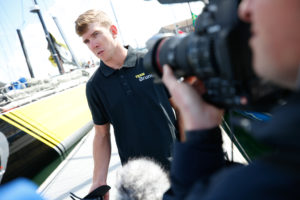 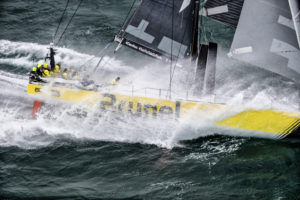 Olympic gold medallist and America’s Cup winning helmsman Peter Burling has joined Team Brunel for the 2017-18 edition of the Volvo Ocean Race – and he’s already out sailing with his new teammates in pre-race qualifying.

The signing of the world’s most in-demand sailor is a major coup for Brunel skipper Bouwe Bekking, and sets up what should be a compelling rivalry with Burling’s long-term sailing partner Blair Tuke, who is competing with Spanish team MAPFRE.

Together, Burling and Tuke carried the flag for New Zealand at the 2016 Olympics and came home from Rio with a gold medal in the 49er class.

The pair followed up that success by playing influential roles in Emirates Team New Zealand’s victory in the America’s Cup earlier this year.

Burling got his first taste of life onboard Brunel’s Volvo Ocean 65 at the start of an overnight sprint from Plymouth, UK to Saint-Malo, France – the third stage of the Volvo Ocean Race’s Leg Zero qualifying series.

“I’ve always wanted to do this race – although I haven’t done a lot offshore, I’ve always been keen to get involved but always struggled to find the time,” Burling said at dockside in Plymouth. “It seems like good timing and a great opportunity to learn a lot off a pretty experienced team.”

He continued: “Round-the-world ocean racing has always excited me and I’m stoked to be part of Team Brunel on this epic edition. I can’t wait to be thrown into the challenge of extreme offshore racing and broaden my skills and sailing experience.”

Still only 26, Burling is the youngest winning helmsman in America’s Cup history.

Either Burling or Tuke could become the first sailor to complete the Triple Crown of sailing’s major events. To date, no one has won an Olympic gold medal, the America’s Cup and the Volvo Ocean Race. Both teams will start among the favourites.

Burling continued: “I’ve sailed against Blair a lot in the past, and I think he’s really enjoying his time onboard MAPFRE. I think both of us will learn a lot before the next time we sail together, and we’ll take on a challenge again together soon.”

Team Brunel were runners-up in 2014-15 under Bekking and have hit the ground running in their preparations for the upcoming race. Burling is the seventh sailor to be announced for the Dutch team following the signings of America’s Cup sailors Carlo Huisman (NED) and Kyle Langford (AUS); Argentinian Juanpa Marcos; and Volvo Ocean Race veterans Alberto Bolzan (ITA) and Maciel Cicchetti (ARG/ITA), all sailing under skipper Bouwe Bekking (NED).

Bekking said: “Peter is one of the most talented sailors in the world, winning an Olympic gold in Rio and the America’s Cup. He’s a huge addition for our team. He is superb driver – one of the fastest – and I think he will adapt very quickly.”

The 2017-18 edition of the Volvo Ocean Race begins from Alicante on 22 October. The race will take the teams 45,000 nautical miles around the world via a series of Host City stops – including Auckland.

“It’s going to be pretty special to be on board to see Auckland, the City of Sails, welcome an epic race like the Volvo Ocean Race,” added Burling.

“Having just toured New Zealand with the America’s Cup I got to witness how much Kiwis really do love sailing – and I know they will really get behind the Volvo Ocean Race coming to town.”