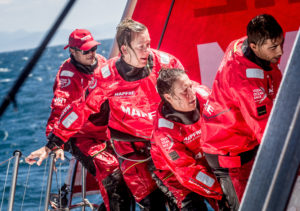 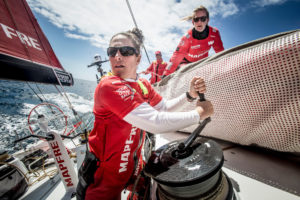 The addition of Echegoyen is notable for two reasons – she is the first Spanish woman ever to compete in the race, and she takes Mapfre’s Olympic medal count to five.

“It’s been months of hard work, but I am very happy with the result because thanks to the help of everyone and especially the hours on the boat I have been able to improve in a world that is so new to me,” she said.

“I have to continue learning, especially to check at what level I am and if I can be a crew member to join the team and help to achieve the goals for the following months.”

Sophie, who raced onboard Team SCA in 2014-15, joins up with Xabi Fernández’s crew to compete in her second consecutive edition – and will be keen to build on an impressive debut in which she won the prestigious Hans Horrevoets Rookie Award.

“It is very exciting this time to be on board with the guys. I can see they have so much experience and I’m learning everyday from them, so I am really excited to get going and start the race.”

It’s been a long road to the start line for Sophie, who has been desperate to get back in the race for a second time.

“I’m very competitive, I love the ocean, I love the adventure and the Volvo Ocean Race is just the ultimate, so it is great to be a part of it,” she said.

For Xabi, the signing of the two females represents a landmark moment in the assembly of his squad.

“Támara has been working hard since March, when the crew first started to sail. With all that I have talked about, both with Pablo Arrarte and Neal McDonald, they agree that as we expected, she has an important learning curve and is gradually gaining confidence and contributing more to the team.”

He continued: “Sophie is someone who has already sailed on this type of boat, so perhaps it’s been a little easier to adapt, although it is also an environment totally different from the previous one. On Team SCA, they had more people on board and so more hands for each job and now she is trying to adapt to sailing with us, which is a bit different.”