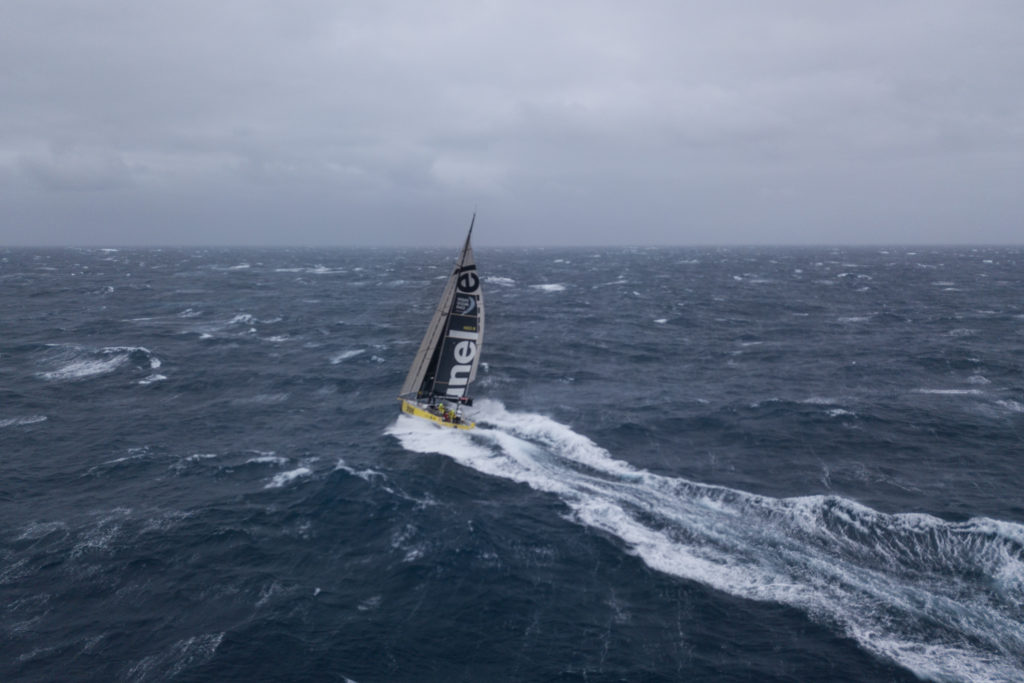 Drone footage from on board Brunel at 51 degrees South. 35-38 knots of wind. Three reefs in the main sail. Top boatspeed of the day 36.1 knots.
pic by Yann Riou/Volvo Ocean Race

Since last posting info on the race on Friday morning, lots has been going on deep in the Southern Ocean, with damaged gear, lots of high wind gybes and more.

The fleet has passed Point Nemo. What’s that you may ask? Or where exactly is that? All will be revealed in a separate post, suffice to say that it is defined as the place furthest from land in the world.

Day 6 of this leg dawned with a reshuffle of the rankings as MAPFRE and Dongfeng Race Team shot to the front of the fleet. 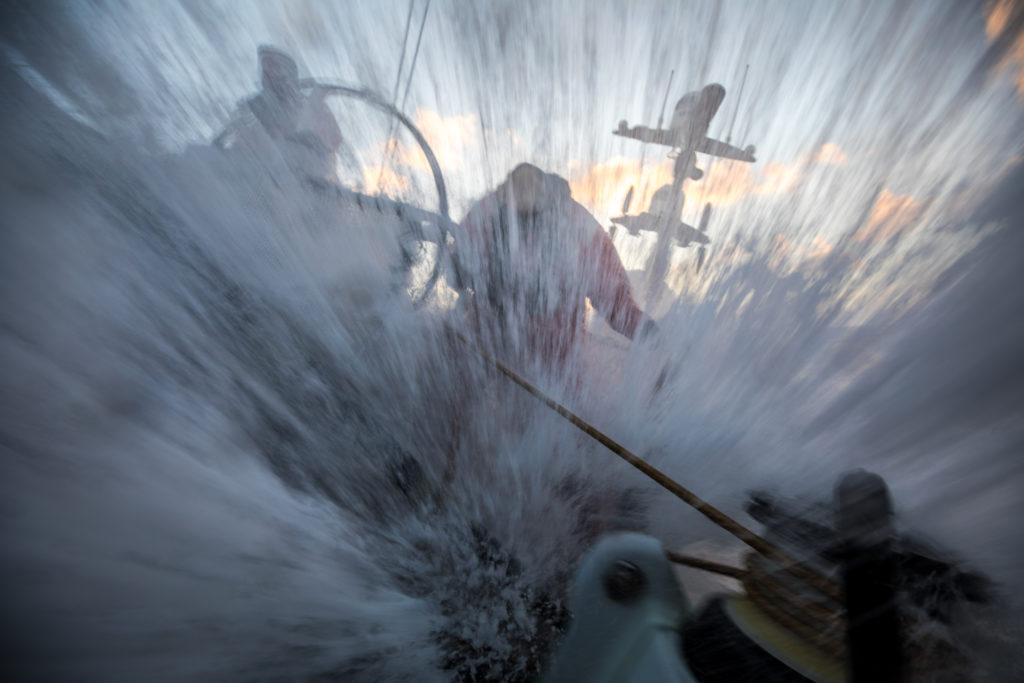 The two feared red boats were rewarded for choosing the hard option of carrying out more gybes as the fleet skirted the Ice Exclusion Zone, deep in the Southern Ocean.

While Team AkzoNobel and Vestas 11th Hour Racing, the previous leading duo, gybed a handful of times in the previous 24 hours, MAPFRE put in eight gybes as they looked to gain the maximum benefit from being the furthest south. 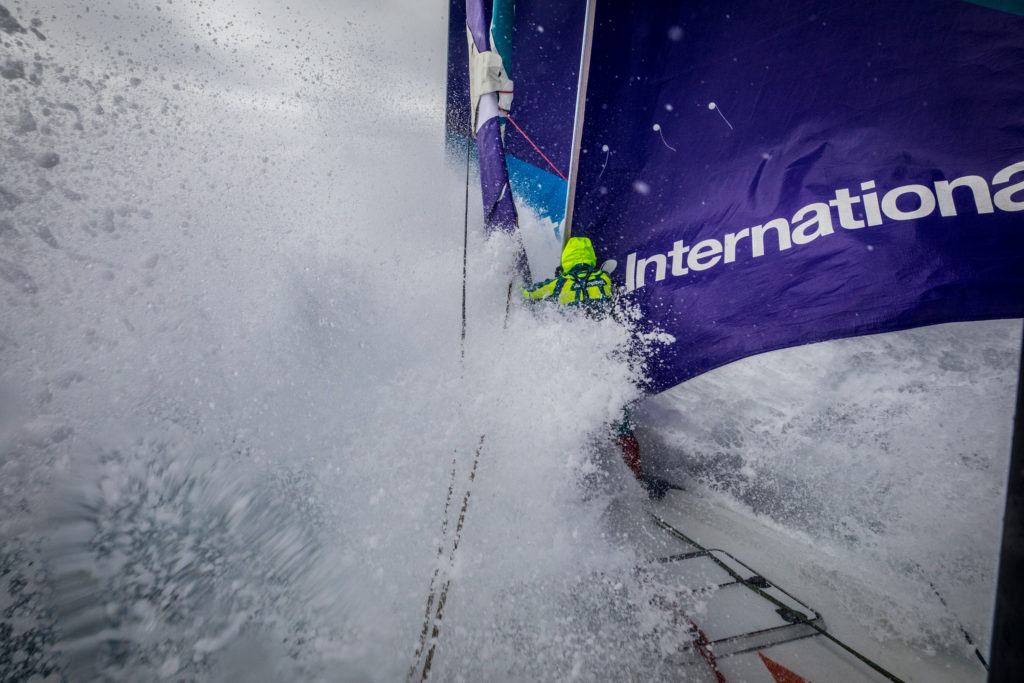 Gybing a Volvo Ocean 65 in strong breeze and big seas is no mean feat, and requires all members of the crew awake and on deck to carry out the extremely physical manoeuvre.

But similar to during Leg 3, MAPFRE leader Xabi Fernández and Dongfeng skipper Charles Caudrelier proved they are willing to push their crews to the absolute limit in pursuit of the top spot.

And it paid off, as MAPFRE emerged as the new leaders of Leg 7 with Dongfeng just under nine miles behind in the runner-up spot. 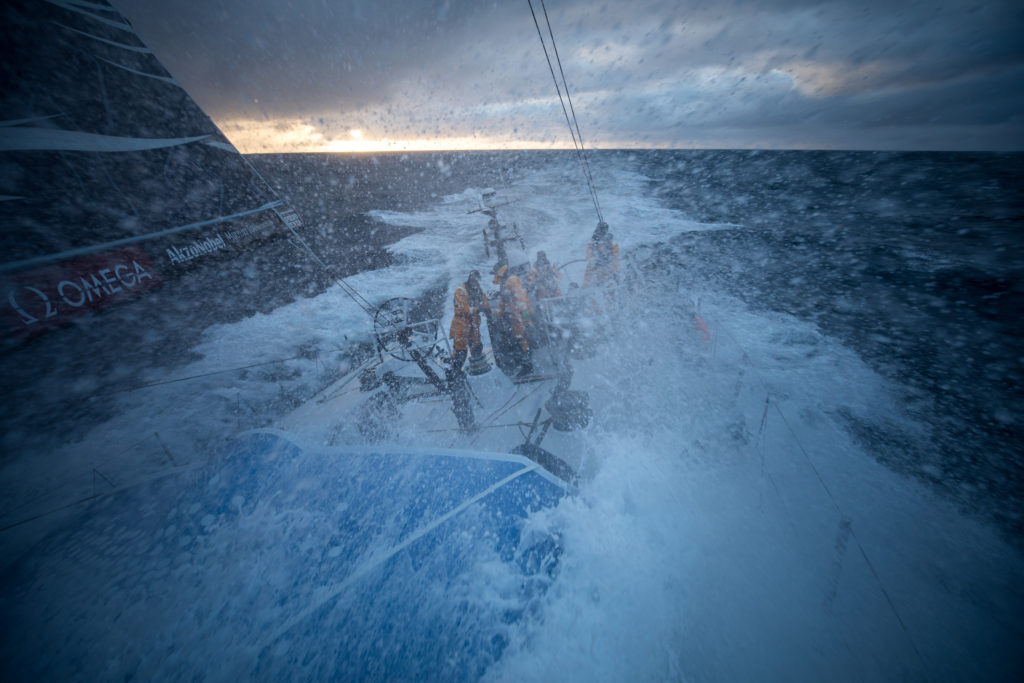 Turn the Tide on Plastic sailing through the furious fifties.
pic by Sam Greenfield/Volvo Ocean Race

But the leaderboard should be looked at with caution, as the boats gybing north inevitably fall down the ranking before exchanging the advantage when they come back to an easterly heading.

“Last night was quite tricky – it was windy and the front passed with a big shift,” he said. “I think we positioned ourselves pretty well, and we’re now the farthest south and east of the fleet said Xabi Fernández, skipper of MAPFRE. 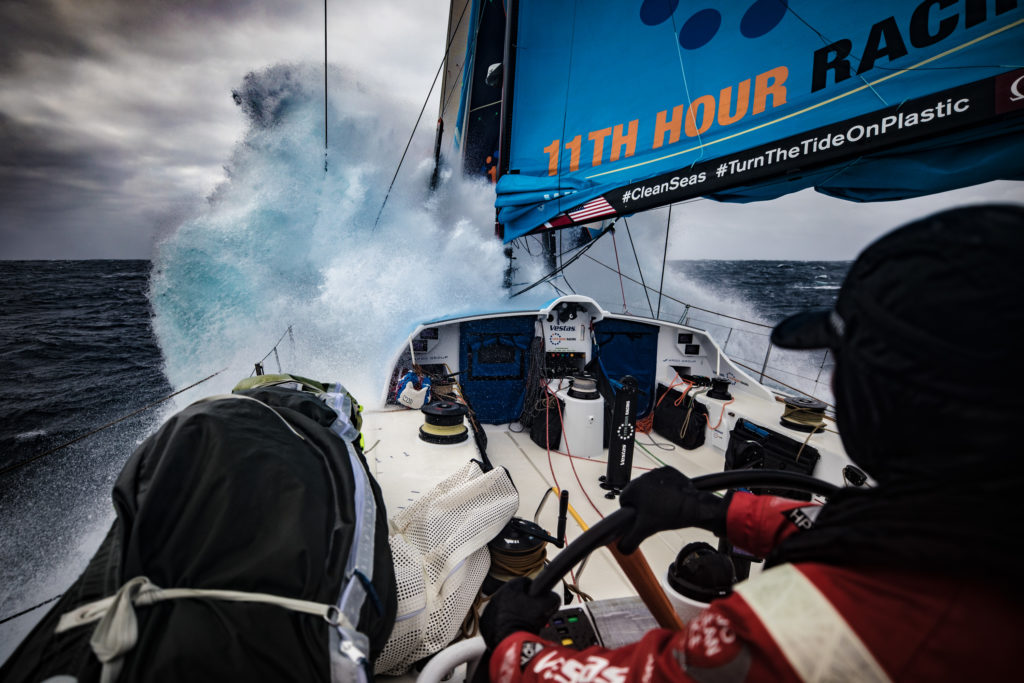 A wall of freezing cold water about to envelope Vestas.
pic by Jeremie Lecaudey/Volvo Ocean Race

Despite opting for more gybes than some of their rivals, the danger of the manoeuvre is not lost on Dongfeng’s crew.

“The worst conditions in the south – colder water, darker nights, windier and you’re a long way from anywhere if something goes wrong,” bowman Jack Bouttell explained.

“Everyone’s in a slightly different mind-set with the manoeuvres in the south because it’s that much more dangerous. Carrying them out is a balance between doing them quickly so you’re on deck as little time as possible but also taking greater care. You can get injured really quickly.”

Team AkzoNobel, meanwhile, were kicking themselves for having lost their lead after more than 1,000 miles in the top spot.

“Dongfeng went past the bow of our boat this morning, and unfortunately MAPFRE was with them too,” AkzoNobel’s boat captain Nicolai Sehested said. “Last night they were behind us and now they’ve crossed us, so it’s not been the best morning. However there’s still 15 more mornings to go though so it can change.” 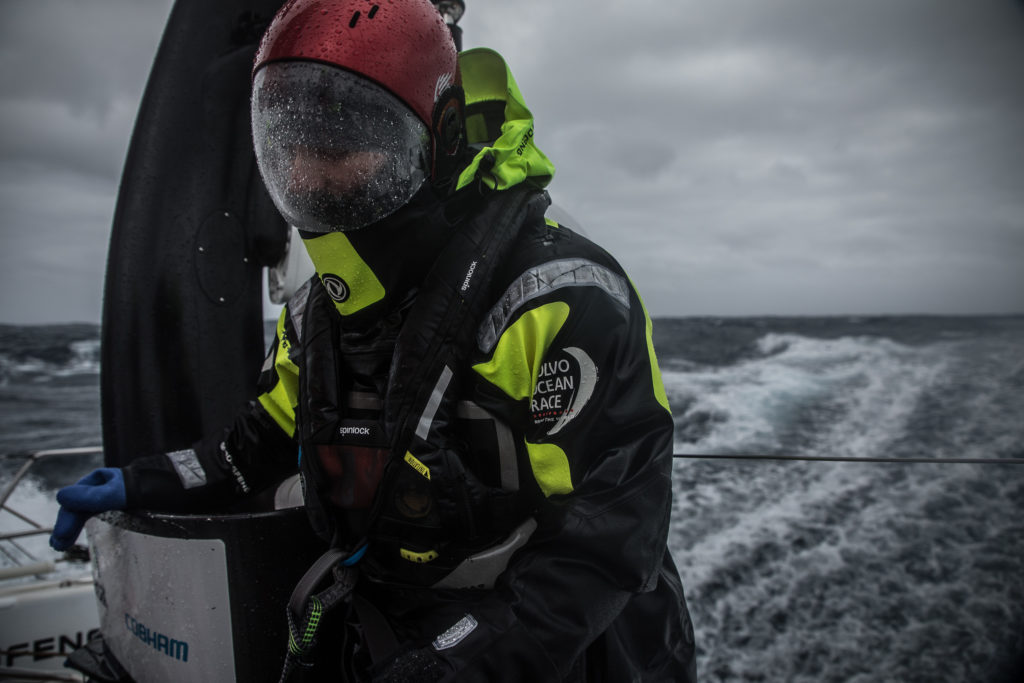 Navigator Jules Salter added: “The shift to the south-west came, and we’re on the wrong side of it. We’ve now just got to sail the boat fast and try to close some distance up. We lost a lot in the last three hours, so it’s not been a very good 18 hours. We should have gybed with them once more but we let them go for probably an hour too long.”

Day 7 saw the Southern Ocean beginning to exact a toll on the fleet as conditions intensified.

The wind was consistently above 30 knots, with gusts approaching 40 knots and the sea state is rising above 5 metres. 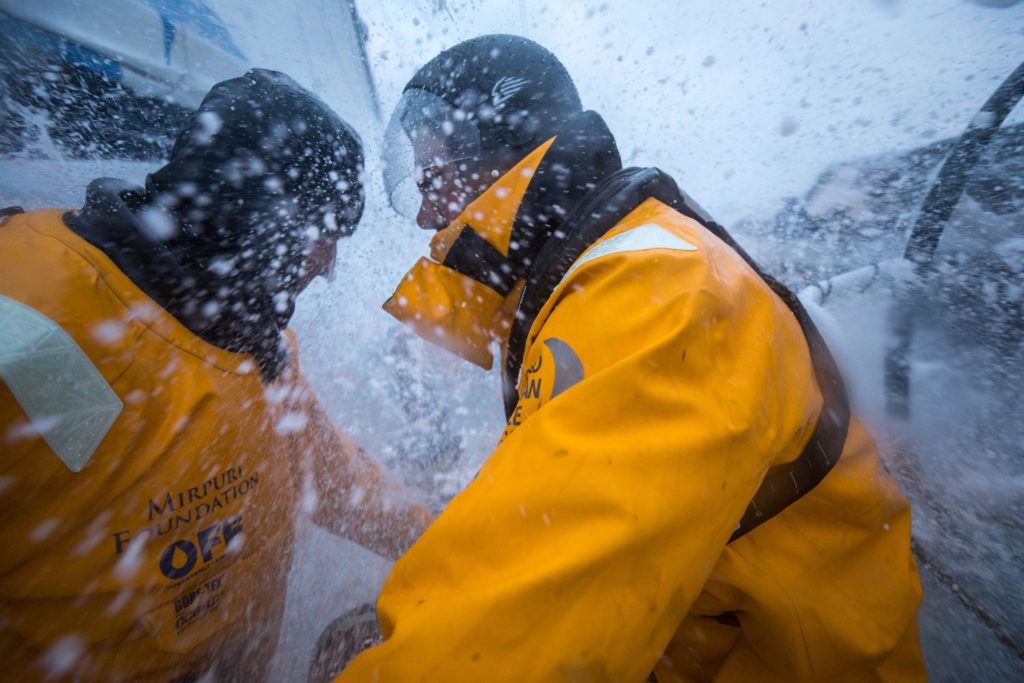 Its wet, wet, wet aboard Turn the Tide on Plastic.
pic by Sam Greenfield/Volvo Ocean Race

MAPFRE, who had been leading at 0700 UTC on Saturday morning, reported damage to its mast, which slowed them somewhat.

“We have some small damage to the mast track,” wrote skipper Xabi Fernández in an email to Race Control on Saturday morning. “We have made a temporary fix and will continue racing.”

Navigator Juan Vila added: “The focus on board is to ensure we protect our boat and equipment. We had a small break in the mast track and now we have to balance pushing hard but knowing when to take our foot off the accelerator.”

SHK/Scallywag, already trailing the fleet by 100 miles this morning, reported damage to a runner block, one of the pulleys guiding the rigging that supports the mast. It was quickly repaired and while the team lost some miles, no lasting damage was done.

“We were gybing along the Ice Exclusion Zone and the runner block (pulley) twisted upside down, so when we brought the new runner on it broke the block and stripped the runner tail,” explained skipper David Witt.

“We were lucky; we could have snapped the runner and lost the mast. So we had to jury rig a fix, put it back together and now we’re off and going again. We’re 110 miles behind, but that’s what happens.” 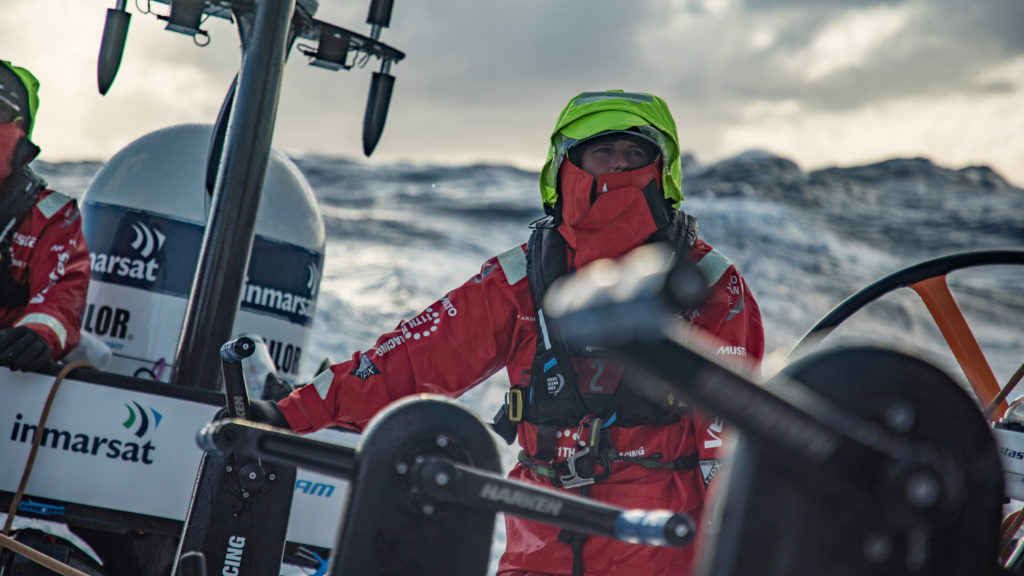 The teams are making fast progress towards Cape Horn, pushed onwards by the gale force westerly winds behind them. Gybing along the southern boundary of the race course of the Ice Exclusion Zone, is making for

“There’s 35 to 40 knots of breeze and big waves,” said Brunel skipper Bouwe Bekking, the eight-time race veteran. “On the one hand the sailing is really fun but on the other hand it’s pretty hairy because you know if you do something wrong it can go terribly wrong. So it’s always to find the balance.”

One team blazing along this weekend is Turn the Tide on Plastic. With Southern Ocean veterans like skipper Dee Caffari and navigator Brian Thompson leading the way, the team has worked its way to the head of the leaderboard at 1300 UTC, racing along at nearly 22 knots – the fastest in the fleet.

“Sending it under water most of the time! Gybe ho! Again and again. A busy day in lots of wind down here,” tweeted Caffari earlier.

By day 8 the winds had moderated for a short period, giving a break to tired and battered bodies before the next Southern Ocean gale is forecast to hit the fleet.

As the winds moderate to 20-25 knots on Sunday Bouwe Bekking’s Team Brunel had taken a more northerly option over the previous 36 hours compared to the bulk of the fleet and it appears to have paid off, with the yellow boat sliding south in front of the pack with a 23-mile lead.

“Some awesome sailing, but also very stressy times, especially when you need to gybe,” Bekking wrote. It’s worth noting his northerly option reduced the number of gybes compared to most of the fleet.

“We had some winds of 40 to 45 knots which is no fun, actually it is pure survival mode, but you know the others aren’t holding back either… No way. It is the way we sail.”

There is a group of three teams chasing – Dongfeng Race Team, Turn the Tide on Plastic and Vestas 11th Hour Racing, all within a couple of miles of each other and looking to close the gap. Team AkzoNobel, another proponent of the northern option is pushing to re-join the pack, but will struggle to slot in ahead of this group. 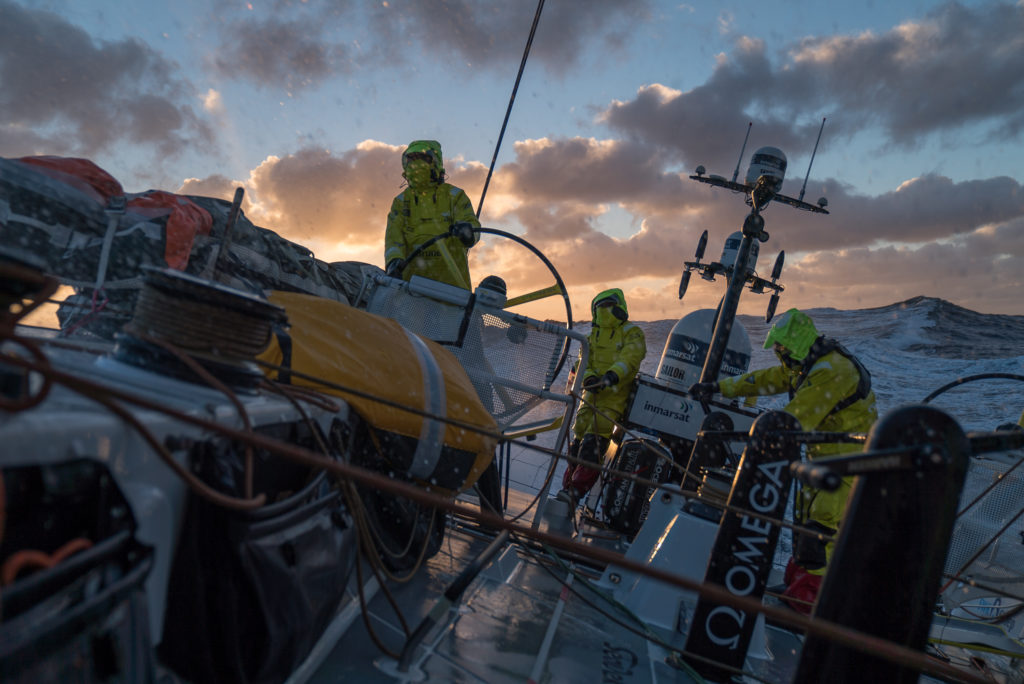 MAPFRE, who had been either at or near the front since the start of the leg, had fallen off the pace. With the winds easing, the damage to their mast track is preventing the team from shaking out a double-reef in the mainsail.

While the rest of the fleet adds sail area in the moderating winds, MAPFRE is sailing underpowered, and at times up to 3 knots slower.

“We’ve made a small repair to sail with two reefs and now we are trying to develop that to sail normal from here to the end of the leg,” said Pablo Arrarte, from a subdued MAPFRE. “It’s difficult. We’re still working on it… We don’t have the full solution yet… We have 20 hours until the breeze comes back up so we will try to fix it before then.”

100 miles further back, SHK/Scallywag is back on its feet after dealing with problems of their own following an accidental gybe on Saturday that put the boat on its side in big winds and heavy seas.

“Your initial reaction is to just stick to the process and look after the people and the boat,” said skipper David Witt. “But once you get through it and get the boat up and running again, you understand the enormity of the job all of the skippers in this race have, to ensure the welfare of the people on board. We’ve tipped it over in the middle of the Southern Ocean in the middle of the night and the closest thing to us is a satellite. It really hits home…

“But our guys don’t give up and they deserve a result on this leg, that’s our responsibility now.”