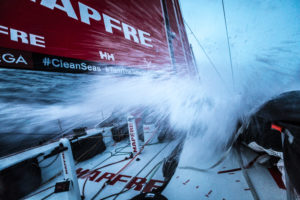 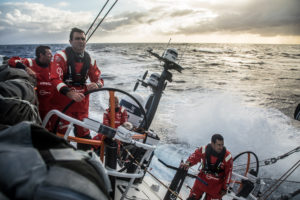 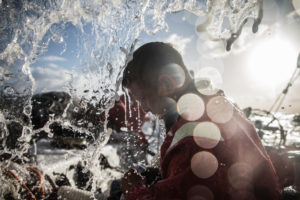 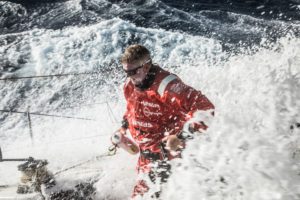 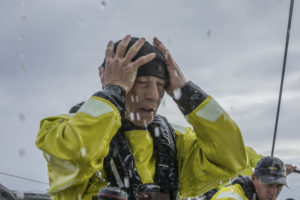 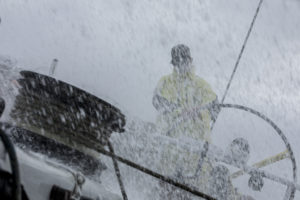 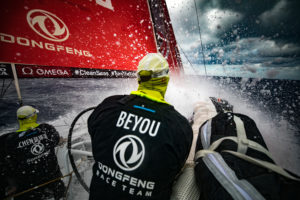 Downwind and fast too  with clouds on board Dongfeng.
Photo by Jeremie Lecaudey/Volvo Ocean Race 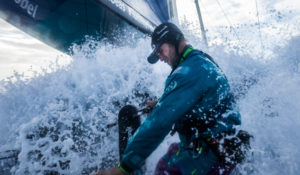 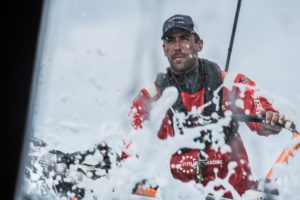 The opening days of this first skirmish south towards Cape Town has been wet, tough and demanding for the Volvo Ocean Race boats and crew as the winds have been in excess of 30 knots most of the time.

This series of pics shows just how fierce life in the Atlantic Ocean can be.

The teams are dehydrated, exhausted and constantly wet. Slaves to the position reports that are delivered to the boats every 6 hours, each team, each sailor, is obsessed with the thought of winning this leg.

The seven Volvo Ocean Race teams have just over 4,600 nautical miles to go until they reach the finish line. Within that distance, they will cross the Equator, drift through the Doldrums and torture themselves trying to navigate the weather minefield that is the Atlantic Ocean.

Yet despite the hardships, its tight at the top, especially for leading quartet.

Leg 1 winners Vestas 11th Hour Racing jumped to the head of the Volvo Ocean Race fleet three days into Leg 2 as the big dive south began in earnest on Wednesday.

Clever sailing from Charlie Enright’s crew saw them dart pass their rivals with a well-timed gybe on Wednesday evening that put them into their own windshift. When they emerged they had a welcome 10-mile buffer over closest rivals MAPFRE, Dongfeng Race Team and Akzonobel.

But it hasn’t all gone Vestas’ way – since assuming the top spot they’ve been forced to watch the chasing pack rapidly advancing from behind in better breeze.

At 1300 UTC Vestas’ lead had been all but whittled away – although the rankings show a two-mile advantage over second-placed Dongfeng in terms of distance to finish the reality is that the top four teams were practically neck and neck, split west to east by 15 miles.

The Vestas 11th Hour team give their impressions – “The cloud giveth and the cloud taketh”.

The blistering speeds of the last few days were today just starting to tail off as the breeze goes lighter with every mile made towards the Doldrums, the band of low pressure notorious for becalming sailors for days on end.

An increase in temperature has brought about an increase in rain showers – welcome for an impromptu wash, but a navigator’s nightmare for the localised conditions they create.

“The tradewind shower clouds have been a minefield, with 25-knot puffs followed by much lighter winds,” said MAPFRE navigator Joan Vila, reporting that he could see Vestas in the distance. “We’ve seen wind coming from pretty much every direction, and speeds from less than 10 knots up to 25 knots. It’s what we’d expect in an area of showers. Right now it looks like it’s clearing a bit, so we might have a bit of a break.”

Just over 50 miles behind the leaders, and another 10 miles west, were Team Brunel, who, according to skipper Bouwe Bekking, have performed their last gybe as they head straight for the Cape Verde Islands some 600 miles west of Senegal.

“We’ve finally gybed over onto what we think might be our final gybe, so if that’s the case it’ll be 10 days without another gybe,” he said. “But it’s very shifty so who knows. We are the most western boat so we’ll see how it pans out. They [the leading boats] gybed early and gained because they are sailing to the south, but it’s all about patience now.”

There was at least some reason to celebrate onboard though – Team Brunel helmsman Peter Burling was named World Sailor of the Year at a lavish ceremony in Mexico last night, in recognition of his recent America’s Cup win with Emirates Team New Zealand.

Burling received the news from teammate Abby Ehler after she picked up an email to the boat from Burling’s parents.

“It’s awesome,” Burling said in a video dispatch. “It’s been a really cool year. My parents will have been stoked to be able to send the news. Thanks for all the support.”

Turn the Tide on Plastic were just under 90 miles from the frontrunners, dropping around 25 miles in a bid to get further west, with Sun Hung Kai/Scallywag 125 miles behind.

Race veteran Liz Wardley, boat captain on Dee Caffari’s Turn the Tide on Plastic, said they had Team Brunel in their sights.

“It’s up and down – in the harder stuff we could’ve maybe pushed a little harder, but we were all tired and doing what we could,” she said. “Now the breeze is lighter we have more people who can drive in these conditions. Brunel are in the same vicinity as us right now. They’re not in the match and nor are we at the moment. I think we should make them one of our goals.”

Stealth Mode
The boats are given position reports only four times per day, at 0100, 0700, 1300 and 1900 (all times UTC). But once per leg, each team has the option to go into ‘Stealth Mode’ whereby its position report is withheld from the rest of the fleet (and us) for three consecutive position reports. This can be used to tactical advantage to make a break for what is perceived as better wind, or to hit a layline, or choose what side to pass an island, etc. The only restriction is that teams are not allowed to go into Stealth Mode when they are within 200 miles of the finish. The approach to the doldrums is a classic opportunity to utilise this tactic. Watch for it over the coming days.