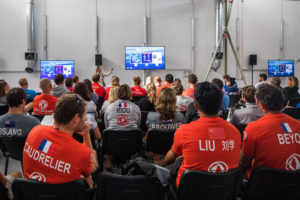 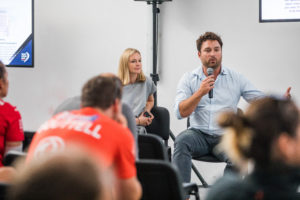 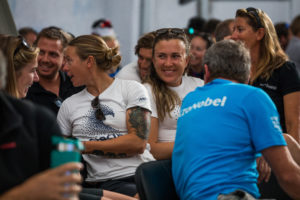 Francesca Clapcich and Annalisae Murphy from Turn the Tide on Plastic at the Volvo Ocean Race Sustainability Training on 30 September 2017 in Lisbon.
pic by Jen Edney/Volvo Ocean Race 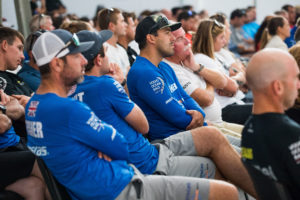 Over 100 Volvo Ocean Race sailors, shore crew, stakeholders and industry leaders came together at the Volvo Ocean Race Boatyard in Lisbon to learn more about ocean health and share ideas on how to tackle plastic pollution during the 2017-18.

Those present learnt more about plastic pollution, heard more about the Volvo Ocean Race’s sustainability plans for the next edition, and shared ideas on how to optimise collective efforts during the race, which begins on 22 October 2017.

Led by 11th Hour Racing, the session featured keynote speakers from around the globe to give the Volvo Ocean Race sailors a new perspective on ocean health ahead of their gruelling race around the planet.

“The Volvo Ocean Race has put sustainability at the heart of everything – and I’m here to demonstrate and support the Race’s commitment to this conversation,” said 11th Hour Racing President, Jeremy Pochman.

“I think that this is the first time an entire sports event organisation has committed to sustainability in this way, and we’re really excited to help facilitate this training.”

He added: “Our commitment is to make all of the Volvo Ocean Race sailors into spokespersons, so to see all the sailors and the shore crews here, talking about how we make this programme come to life is really exciting.”

“It’s really nice to bring all the teams together for a subject that we’re all committed to,” said Turn the Tide on Plastic skipper Dee Caffari. “We’re all very passionate about the Race’s sustainability focus and ultimately we have to deliver that message as ocean ambassadors.

“As sailors we get to play in this unique playground and we see the impact that plastic pollution is having on ocean health. For that reason, we’re the best people to pass the message on, and regardless of which team we’re racing with, collaboratively, we can all make a very big impact.”

Ocean health campaigner Emily Penn also spoke about the dangers of micro plastic and gave the sailors tips on how to communicate the message, as well as reduce personal plastic consumption.

“We go to some very remote places, and as we race around the world we’re hoping to collect some ground-breaking scientific data for the first time. We’ll be sampling water and collating those results with GPS tracking – and we’ll keep the filters, so we can identify the volume of micro plastics in each section of the ocean,” continued Caffari, whose campaign is backed by the Mirpuri Foundation and Ocean Family Foundation, and will amplify the United Nations ‘Clean Seas’ campaign around the world.

“By the time we finish the race, we should have lots of real data that we can use to push our message further, and take to governments and decision makers globally.”

After the session, the teams took part in a clean up around the Volvo Ocean Race village, organised by Vestas 11th Hour Racing sailor Damian Foxall.

“We want to create a positive plastic footprint,” he said. “We can cut consumption, but also recycle, refuse, educate and pick up. It’s all very well sitting down and learning about sustainability – but it’s not until you get hands on that you actually make the connection.”

“We’re delighted that all seven of our teams and our wider stakeholder network came along to support our renewed sustainability focus in 2017-18,” explained Anne-Cécile Turner, Sustainability Programme Leader at Volvo Ocean Race.

“This session is the first of a series of exciting activations we’ll be holding throughout the race – including education and science programmes, and Ocean Summits in seven Host Cities around the planet in order to continue driving conversation around sustainability, and to influence decision makers and business leaders in local markets.”