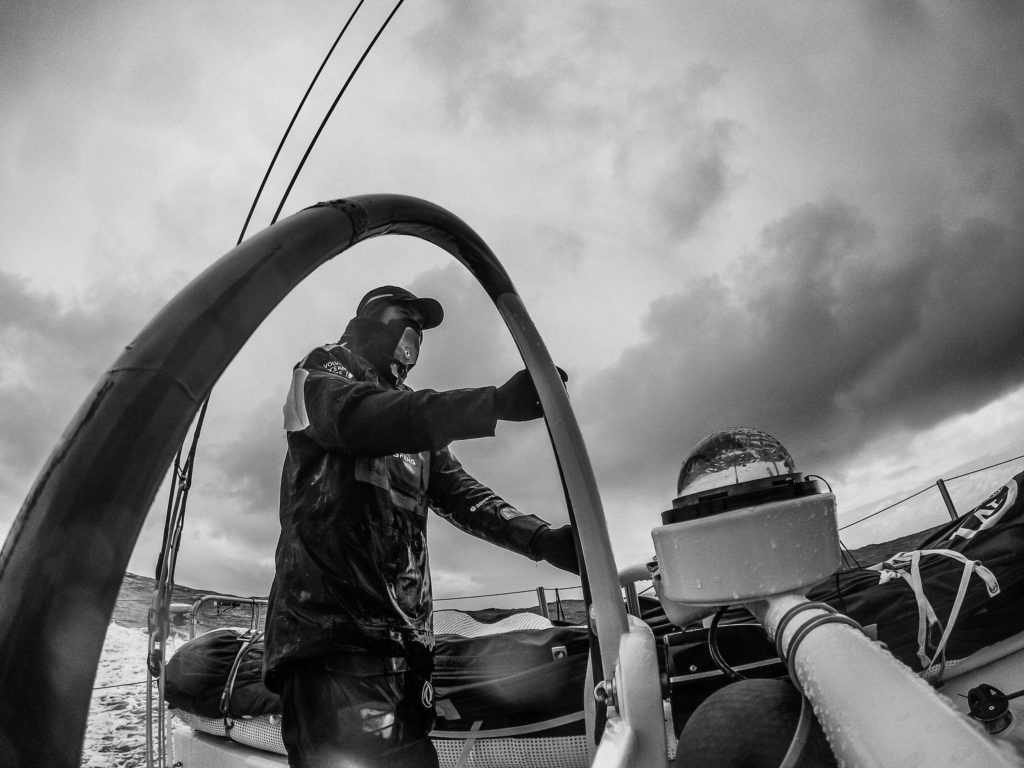 On board Dongfeng. Jack Bouttell driving under the cloud.
Photo by Martin Keruzore/Volvo Ocean Race

The last few days of racing in the Southern Ocean have been very interesting, especially the duel between MAPFRE and Dongfeng. It’s relentless yet ongoing and without any letup. The determination to win the leg simply keeps these two crews pushing boundaries – and it’s physically demanding too. 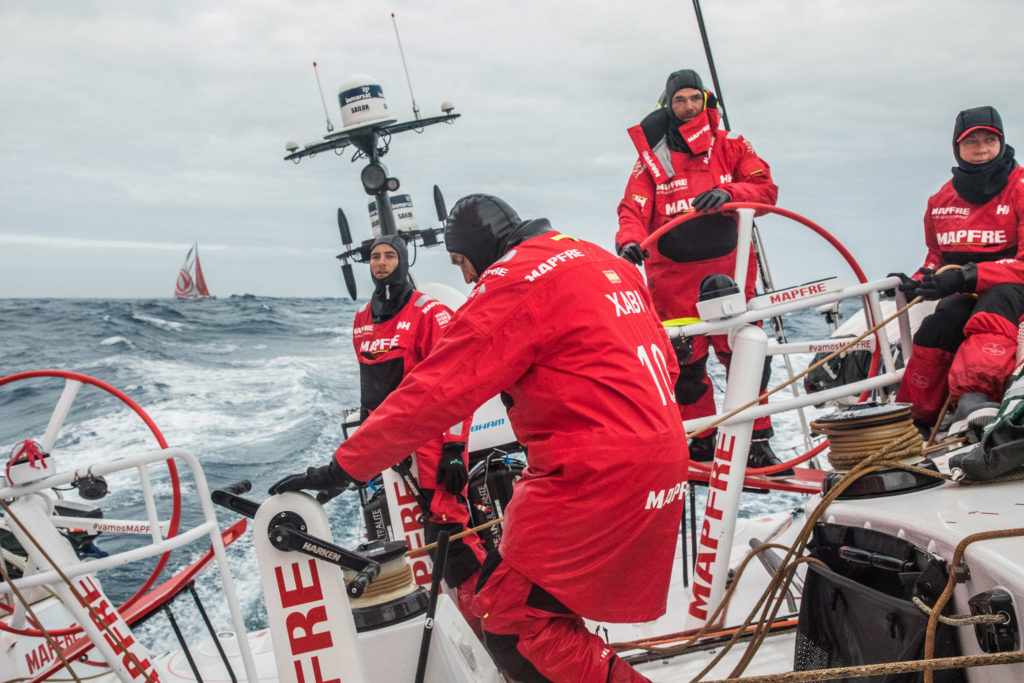 Dongfeng crosses behind MAPFRE in a battle for the lead into Melbourne.
Photo by Jen Edney/Volvo Ocean Race

Both teams have been zig-zagging along the southern boundary of the ice exclusion zone, which prompted Charles Caudrelier, skipper of Dongfeng to say: “During the next 30 hours we are going to gybe at least every hour, so it’s just a nightmare”.

The nightmare being that gybing in the prevailing conditions can be tough on the boat, but is also very tough on the crew who have to move all the gear below decks (about 600kgs worth of gear) from the leeward (low) side to the windward (high) side of the boat – something which can take 20 to 30 minutes. Plus, it’s the off-watch crew who do this, so their rest period is severely shortened. 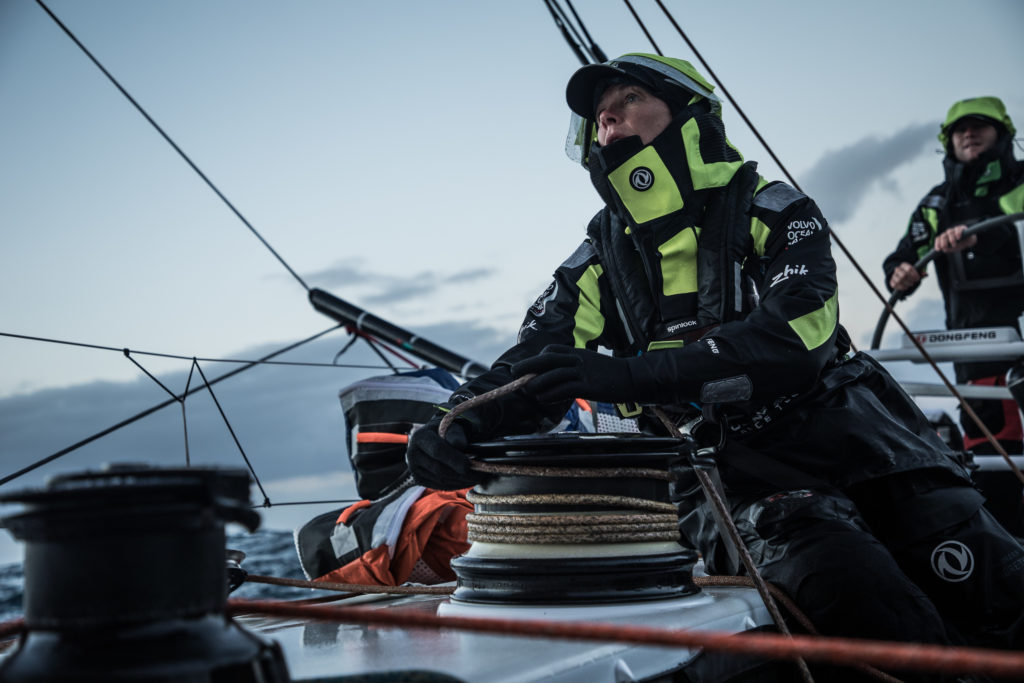 Carolijn Brouwer before the sunrise, ready for another gybe on Dongfeng.
Photo by Martin Keruzore/Volvo Ocean Race

Revealing just how close the racing is comes from this onboard comment: “We have been in visual sight of Dongfeng from the end of our night and all this morning, with both throwing gybes along the ice limit line, as winds are weak further to the north,” writes MAPFRE navigator Juan Vila in a report to race headquarters. “From early this morning we have so far done 17 gybes in less than 11 hours.

Halfway through Leg 3 Dongfeng Race Team and MAPFRE were separated by less than 5 miles.

The action at the front has been so tight that at one stage MAPFRE had to ease their sails in order to avoid a collision with leaders Dongfeng on one of many close crosses over the past 12 hours.

It is an incredible occurrence given their position thousands of miles from anywhere. In fact the fleet has sailed a few hundred miles north of the Kerguelen island chain, one of the most isolated places on the planet.

By virtue of being slightly further south and able to sail a faster angle to the wind, Dongfeng Race Team and MAPFRE are making gains on the chasing boats.

As a result the pressure is starting to manifest itself. “What a battle we are having with our Chinese friends of Dongfeng! I should say it is good fun, but it is being quite hard to be honest,” wrote skipper Xabi Fernández on MAPFRE.

“Right now we are in a drag race heading ENE, making a lot of nm (nautical miles) towards Melbourne which feels good and we have Dongfeng just a few miles ahead of us… 2300 nm to go and plenty of action so we keep with the moral high as we feel we are doing a very good leg. We keep stretching in the boats behind so that is good too.”

On the leading boat, Dongfeng, skipper Charles Caudrelier is feeling the pressure.

“After 9 days of racing and more than 3000 miles I start to hate the red boat of our Spanish friends! I heard that Xabi is an ex cycling champion and as we say in France about biking MAPFRE is sucking our wheel, following all our moves and waiting for an opportunity to attack.” 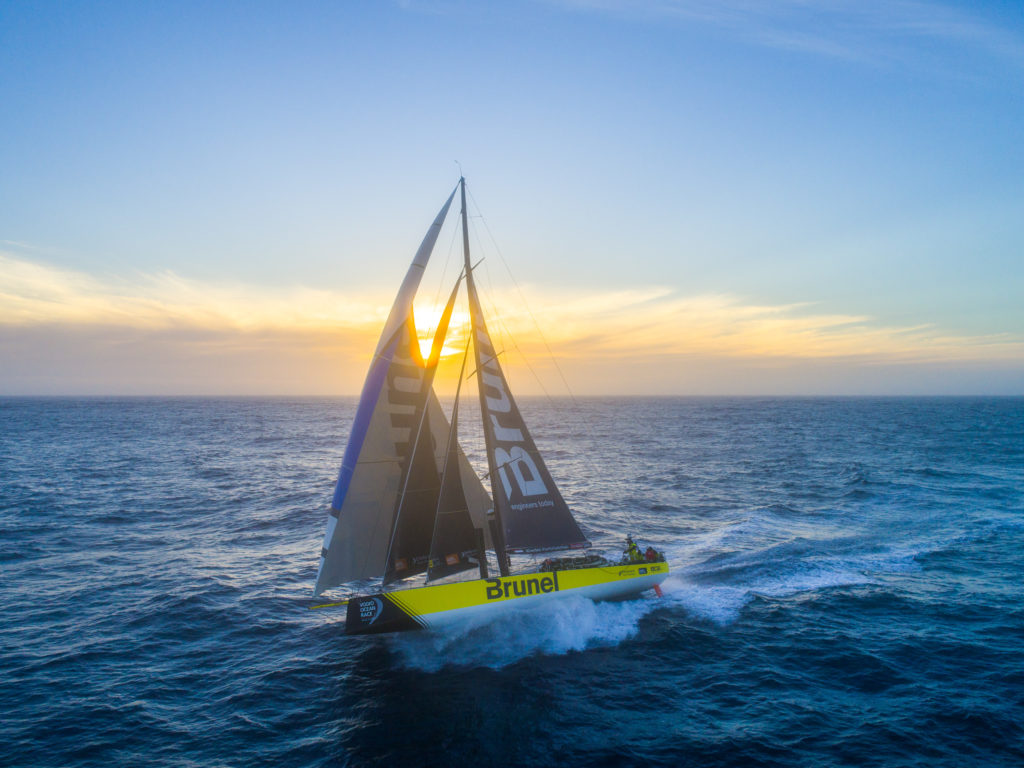