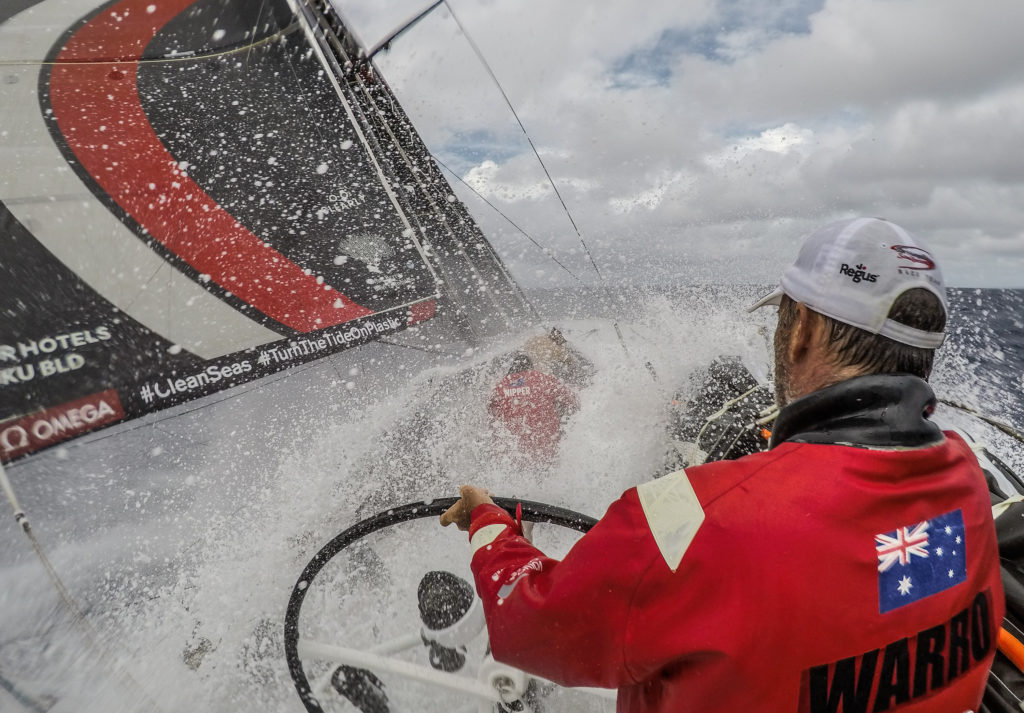 Crossing the doldrums on this leg has been described as one of the longest and most painful doldrums crossings in memory!

Certainly it created some excitement and tense moments for race followers as the fleet bunched up, and then rocketed off, only to slow again in another light patch. For the crews, the less said the better as they were “gatvol” of the conditions and needed to leave them behind.

For some the doldrums created opportunities, and for others the experience was too painful to talk about. 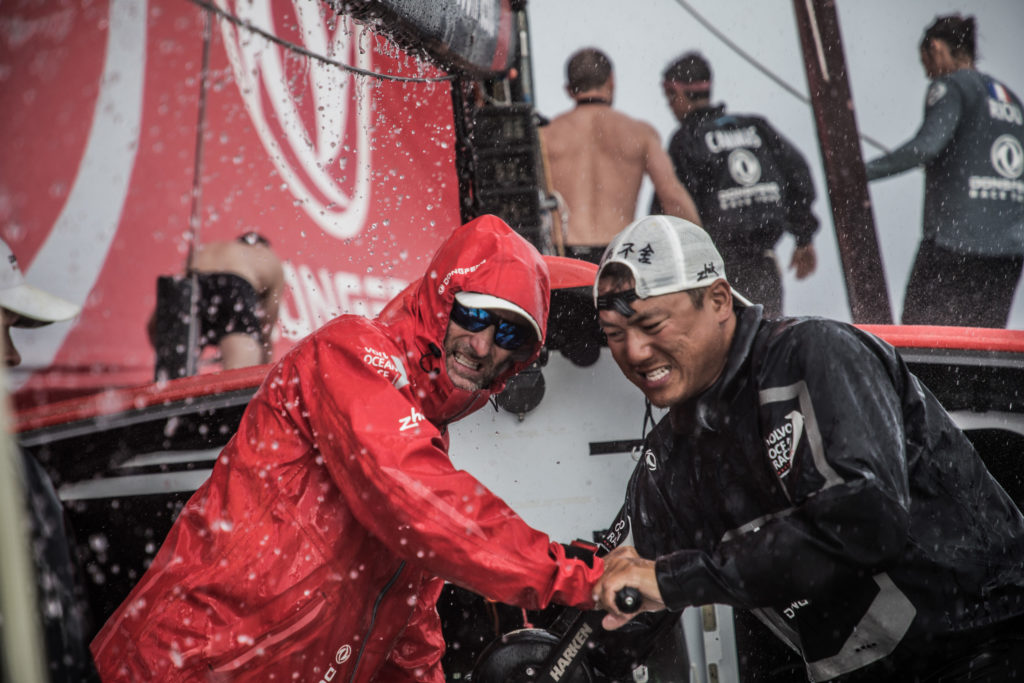 On the pumps aboard Dongfeng.
Photo by Martin Keruzore/Volvo Ocean Race

But now the fleet, led by Team Sun Hung Kai/Scallywag, is powered up and sailing fast, with an ETA of Friday a distinct possibility.

Dave Witt’s team shot to the front of the fleet on Saturday after ‘cutting the corner’ north of the Solomon Islands and have since then consolidated their lead over their six rivals. 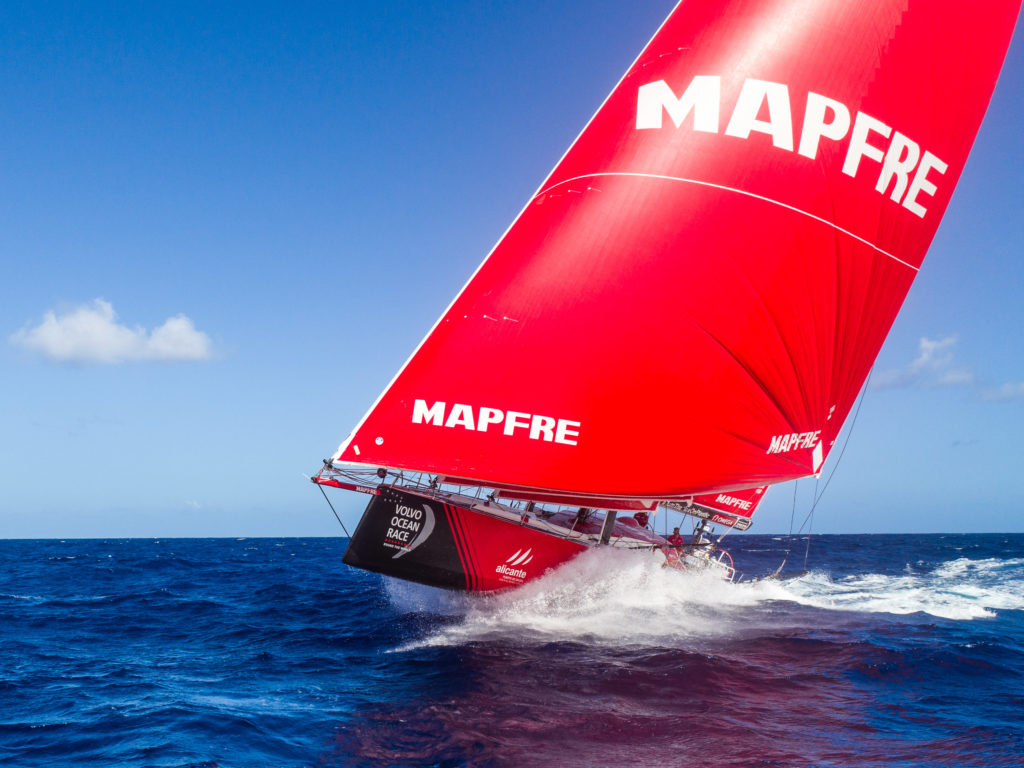 Driven on by the opportunity to lead the fleet across the finish line in the first ever Volvo Ocean Race stopover in their home town of Hong Kong, Scallywag have found an extra gear as they profit from favourable trade winds at the front of the fleet.

In the 24 hours prior to the 1300 UTC position report Scallywag clocked up an impressive 504.7 miles, 25 miles more than second-placed Vestas 11th Hour Racing managed and 77 miles more than team AkzoNobel in third.

Despite their healthy lead, the Scallywags are taking nothing for granted.

“A couple of days ago we’d lost a fair few miles, and so we looked at some of the weather files and tried to do something slightly different,” Scallywag crewman John Fisher explained.

“Over the last day or so it’s started to pay off. It’s more positive not being at the back, but you know it can all change. Hong Kong is our home town so for us to get a good result would be everything.” 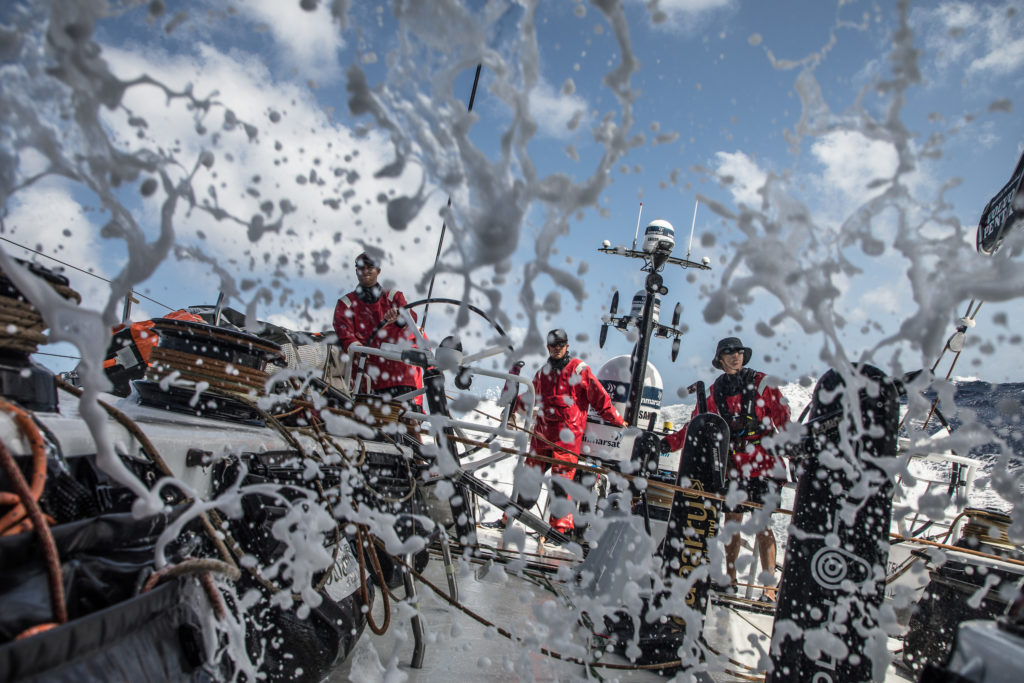 Among those cheering for Scallywag is one group of unlikely fans – the crew of MAPFRE.

Although they would rather be fighting for the Leg 4 lead the overall race leaders, some 170 miles behind in fifth, would rather see Scallywag win the leg and pick up the bonus win point than see it go to Dongfeng or Akzonobel, their biggest threats on the leaderboard at this stage of the race.

The north-easterly trade winds now dominate the run in to Hong Kong, limiting the tactical options available to the teams. Instead the focus is on pure boat speed as each crew attempts to rise through the rankings over the final days of Leg 4. 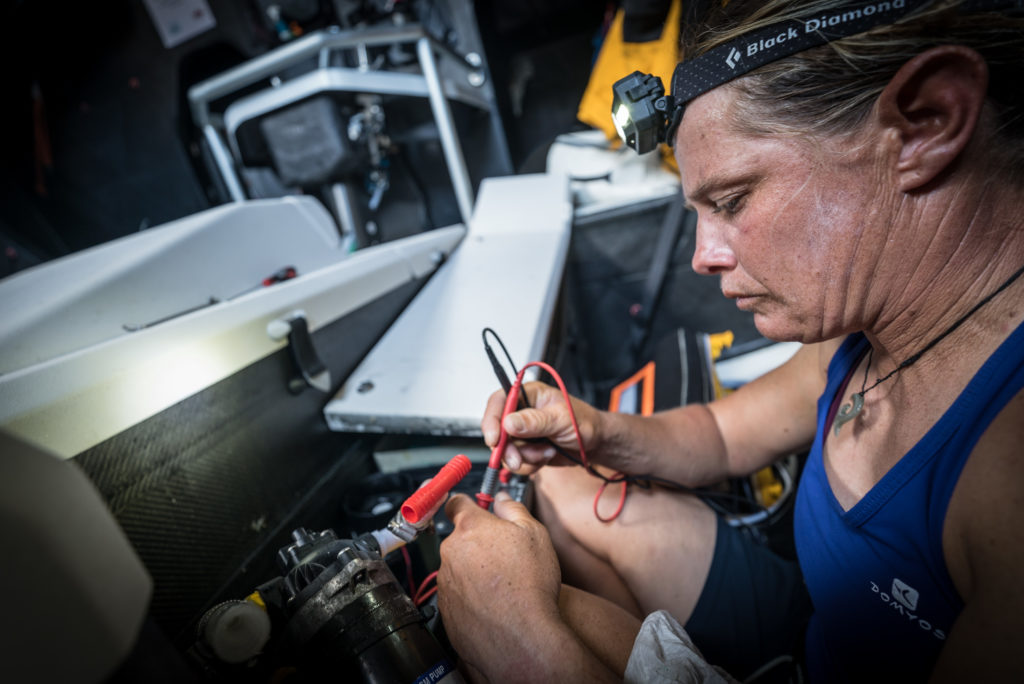 General Boat Captain Genius saving the day by firstly finding the problem to the problem water maker pump and then fixing it.
Photo by Brian Carlin/Volvo Ocean Race

Turn the Tide on Plastic had more than just the position reports to worry about when their water maker – the machine that removes the salt from sea water to make it drinkable – stopped working.

It turned to Liz Wardley – nicknamed Little Miss Fix It by skipper Dee Caffari – to solve the problem. She quickly identified a corroded part within the water maker, and soon after the crew had fresh water again.