Peter Burling, Carlo Huisman and Kyle Langford, the three under thirty sailors of Team Brunel, had their first real offshore stage in the Volvo Ocean Race. They look back on Leg 2 with satisfaction, but have higher ambitions for the rest of the race. 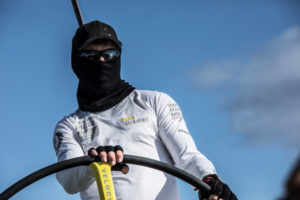 Peter ‘the bandit’ Burling driving like he stole it. Photo by Rich Edwards/Volvo Ocean Race.

“There were so many decisions to be made which made it real fun. It’s not comparable with Olympic sailing or the America’s Cup. You have to be fully focussed for 19 days, but it’s still sailing. That’s what counts for me and I’m really looking forward to the next Leg. As a team we can still improve and that’s the most important.” 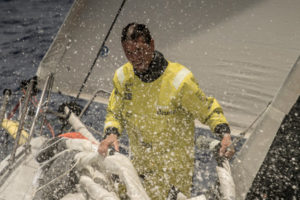 Huisman: you have to be able to motivate yourself.
Huisman: “It was a nice leg. I think we did a lot better as a team than during the first leg. The lessons from the first leg were taken up and we improved. ”

“The biggest difference between Leg 2 and everything we have sailed on the boat is the length. This Leg was more than 7,000 nautical miles, and it took us almost 20 days. That is still very fast; we haven’t slowed down in the doldrums. After a couple of days it’s getting difficult. Every time it is your watch you have to keep going. The intensity and sharpness on board that is the most difficult, but of course also most important. Sometimes the result or performance in your watch is disappointing. You have to be able to leave that behind you. You have to be able to motivate yourself. ”

“It’s now very nice to be away from the boat for a few days. What matters now is that you recover and gain weight again. Improving your fitness is not really possible during a stopover. But it is very nice to have normal and fresh food, a real bed and some time for my girlfriend, friends and family. I try to go to the gym every day, it’s about finding the balance between recovering and getting out. But at the same moment I am really looking forward to the start of the next leg. ” 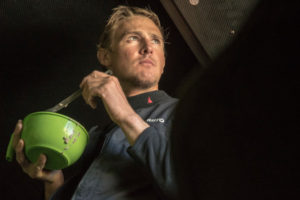