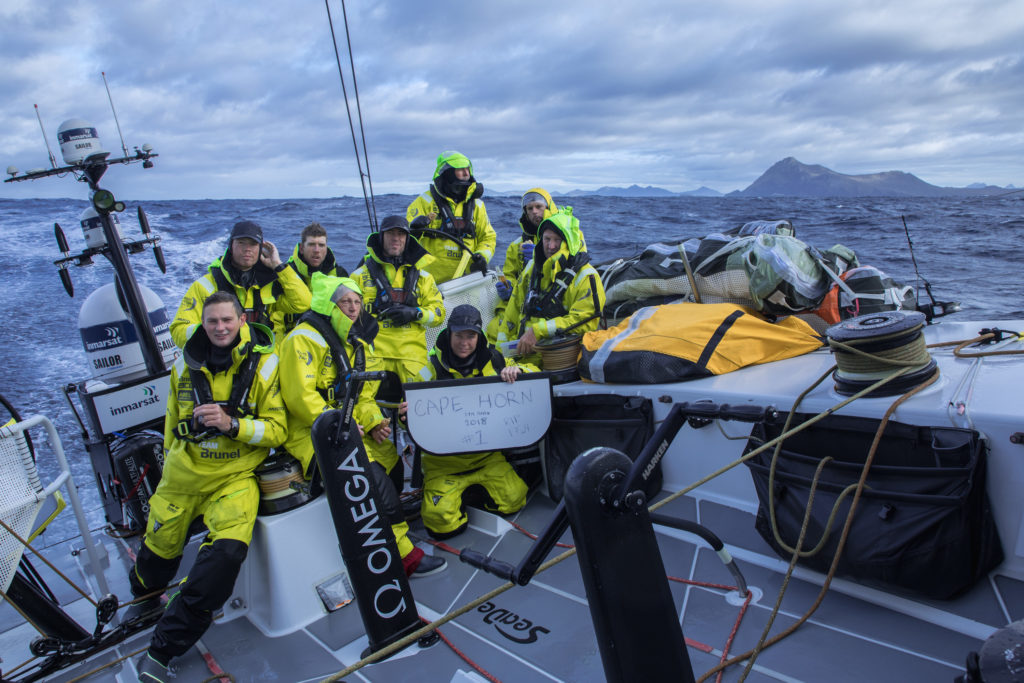 This is the leg all crew have been waiting for, and which many armchair sailors dream about doing. The Southern Ocean holds a mysterious allure – as it is just that – mysterious.

Yet it’s the toughest leg in the race by far, and so far the most dramatic – and regrettably tragic too.

Earlier in the week John Fisher was lost overboard from Scallywag, and never found.

Just west of Cape Horn MAPFRE suspended racing to repair her mast track which has been problematic for some days now.

Yet the boat which has been battling so far in the race to secure podium finishes is Brunel, but she led around The Horn and is now looking to secure victory on this leg and bolster her overall performance.

After one of the most relentless Southern Ocean legs in the history of the race, the fleet has passed Cape Horn, and are back in the south Atlantic Ocean.

Skipper Bouwe Bekking and navigator Andrew Cape have used their veteran nous to sail Team Brunel past Cape Horn at the head of the Volvo Ocean Race fleet.

Bekking and his team passed the famed Cape at 13:01 UTC on Thursday and earn one point on the leader board for being first past the Horn. 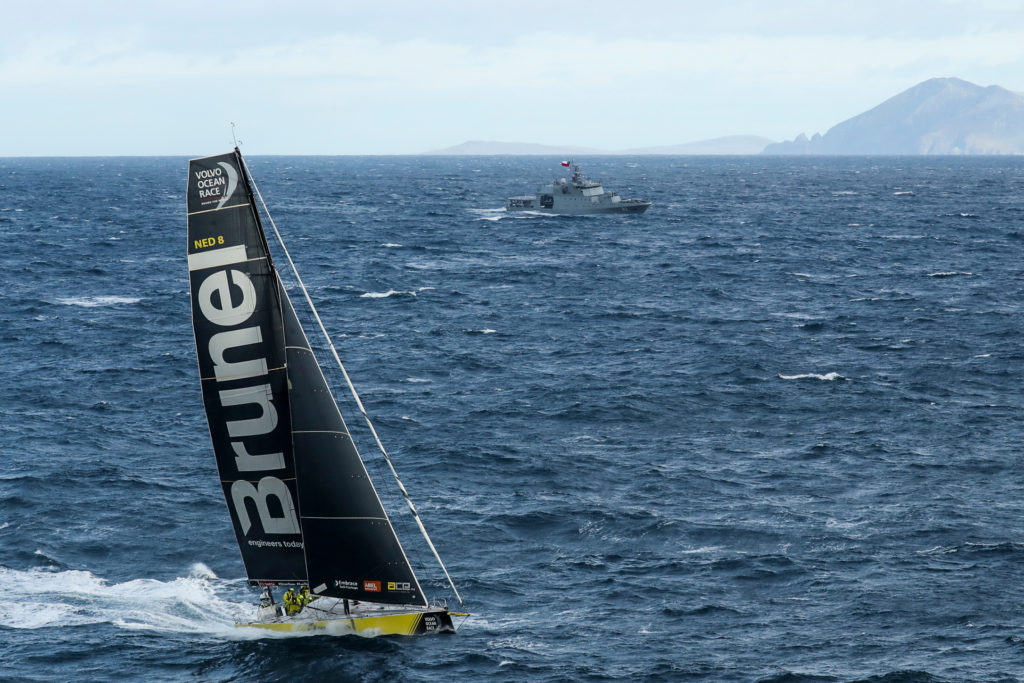 But even with a successful passage from the Pacific into the Atlantic Ocean, Bekking said the mood on board during the approach to Cape Horn was subdued.

“The crew is very, very, very tired,” he wrote earlier on Thursday. “Even though we are leading, there is no ‘hurray’ feeling on board… The loss of John (Fisher) is sitting way deeper than people like to admit: I think of him several times in an hour.”

He’s not alone. As the sailors have some more time to digest the news about the loss of Scallywag’s John Fisher, the impact is sinking in. 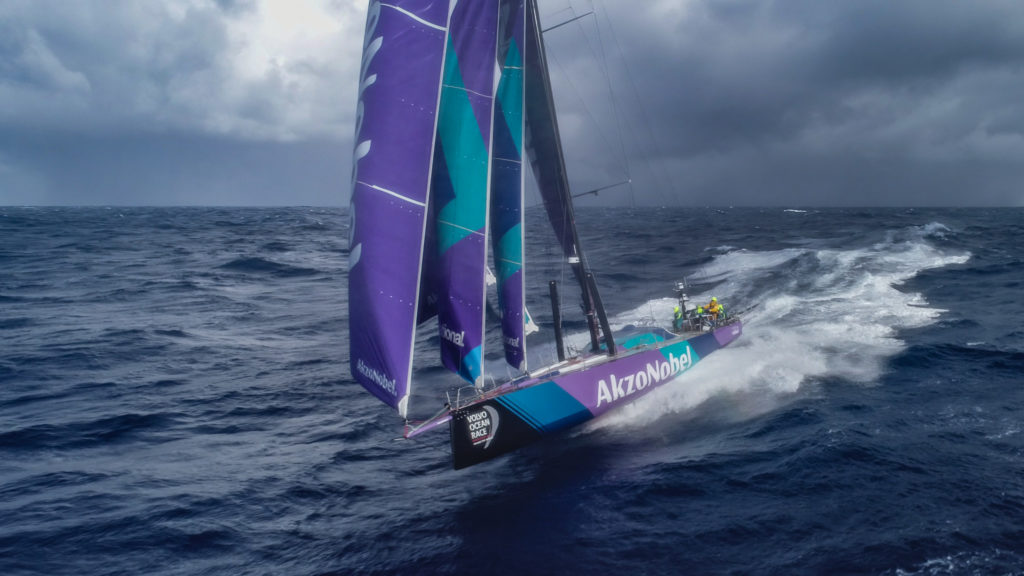 “This leg has claimed a good man in Fish,” said team AkzoNobel’s Chris Nicholson. “We’ve all been very deeply affected by it and we offer our thoughts to his family and friends.”

“I can speak for everyone on board to say we’re all really, really looking forward to getting there,” said navigator Simon Fisher.

“It’s the hardest of the great Capes to take on and this has probably been the toughest Southern Ocean leg on record for quite some time. I’m on my fifth race now and I don’t remember one as hard. As usual it’s blowing about 35-40 knots, so really, there’s just been no let up in the last week and half to these conditions.

“We’re certainly taking stock to think about what it means to get around Cape Horn and also to pause and think about John and the Scallywag guys who have been through a terrible ordeal and this will be a good moment to pay our respect to them.” 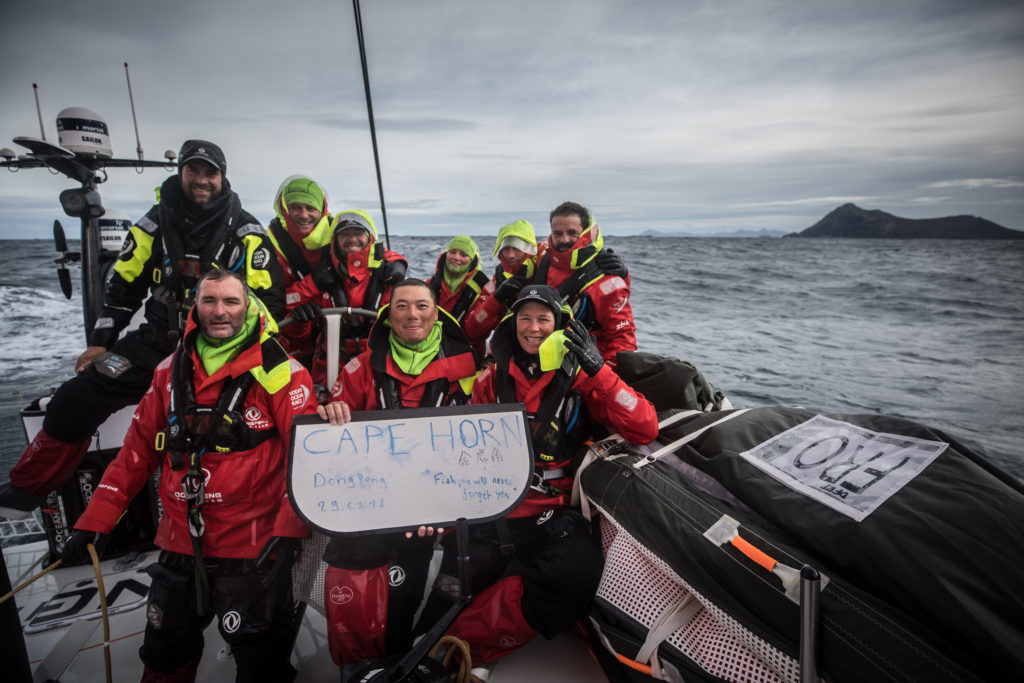 Dee Caffari has taken a crew of novices across two Southern Ocean legs and today finds herself in the hunt with the group of boats chasing Team Brunel.

“It’s a bit like a proud mum moment,” she said, talking about what it means to her to have shepherded her crew to Cape Horn.

“This has been the furthest south most of them have ever been. I’ve got six people who had never been in the Southern Ocean before this race who are about to round Cape Horn, which not many people get to do.

“But the tragic news we’ve had this week… it’s made us all realise how vulnerable we are down here, how hostile the environment is down here, and how quickly things can go bad, and how we’ve all lost a friend. That’s affected everyone quite deeply.
“So we’re saying that this rounding is definitely for Fish.” 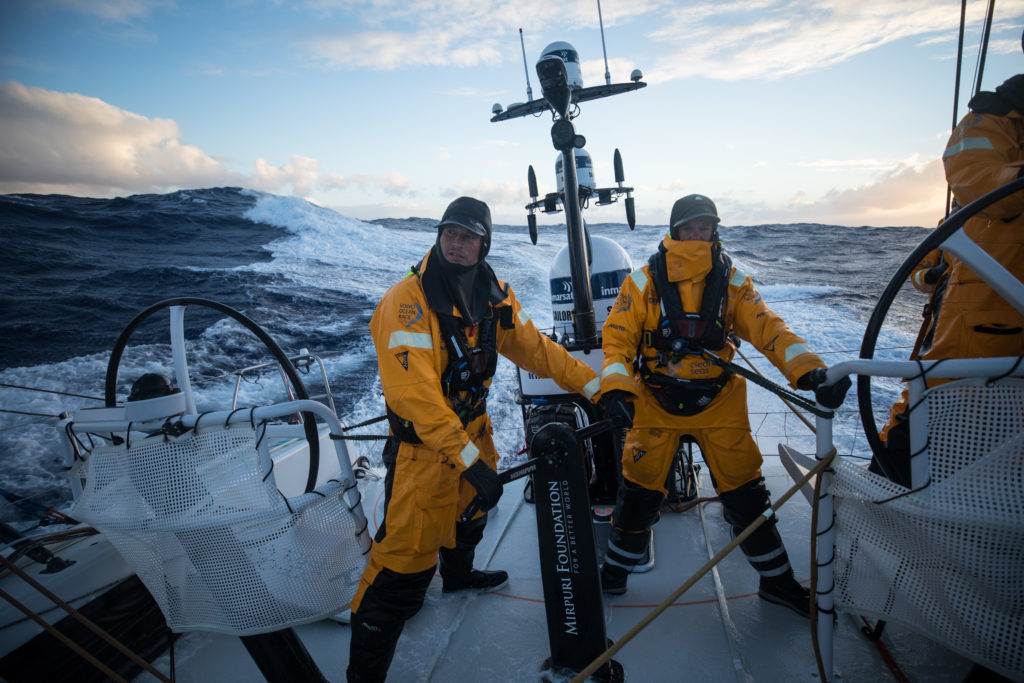 On board Turn the Tide on Plastic where Henry Bomby & Francesca Clapcich are clipped on tight.
pic by Sam Greenfield/Volvo Ocean Race

As the fleet races around Cape Horn, Team Sun Hung Kai/Scallywag continue to make progress towards the west coast Chile, with landfall anticipated early next week.

Team Brunel First to Round
Team Brunel was the first of six boats to round Cape Horn at 13.01 UTC on Thursday March, 29. The sailors have been experiencing harsh conditions in the Southern Ocean in the past days with high waves and wind speeds of up to 100 km/h. Around Cape Horn there were winds of 30-35 knots and 6 meters high waves.

But even with a successful passage from the Pacific into the Atlantic Ocean, Bekking said the mood on board during the approach to Cape Horn was subdued.

“The crew is very, very, very tired,” he wrote earlier on Thursday. “Even though we are leading, there is no ‘hurray’ feeling on board… The loss of John is sitting way deeper than people like to admit: I think of him several times in an hour.” 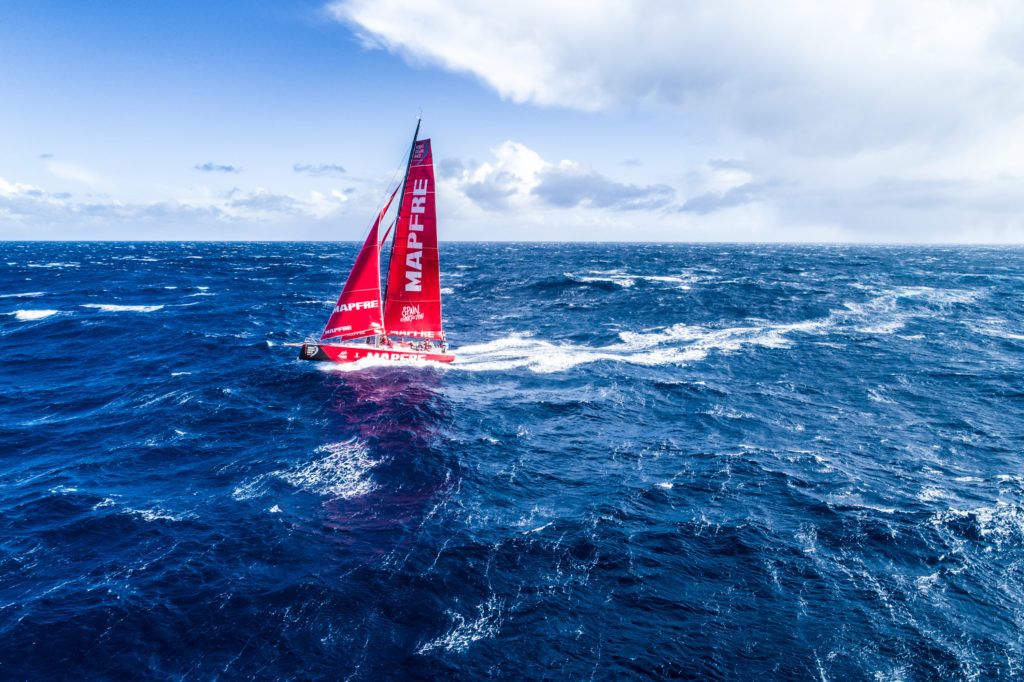 The crew of MAPFRE were peeling sails in 35-40 kts of wind.
pic by Ugo Fonolla/Volvo Ocean Race

MAPFRE Suspends Racing
While the Volvo Ocean Race fleet mark a major milestone with the passage of Cape Horn, MAPFRE suspended racing to work on a repairing a section of the mast track that came unglued from the mast five days ago.

Until now the team has done a good job of limiting the impact of the damage on its performance through various jury-rig solutions.

But now, with 2,000 miles of racing left to the finish line in Itajaí, Brazil, skipper Xabi Fernández has elected to suspend racing as of 18:32:20 UTC, and just six miles west of Cape Horn, to make a more effective repair to both the mast track and mainsail. Three members of the shore team are in the area to assist the sailors.

Under the rules of the Volvo Ocean Race, a team that suspends racing may use its engine, get outside assistance or take on equipment to make a repair.

The penalty for suspending racing is that you must remain out of the race for a minimum of 12 hours, and return to the same location where you suspended before resuming the race. Given the speed of the other boats, this latest development has the potential to knock the overall race leader back significantly.

The forecast, however, works in MAPFRE’s favour. A ridge of high pressure is expected to slow the frontrunners and allow the trailing boats to catch up.

“A complete restart just after the Falklands,” is how leg leader Bouwe Bekking describes it. 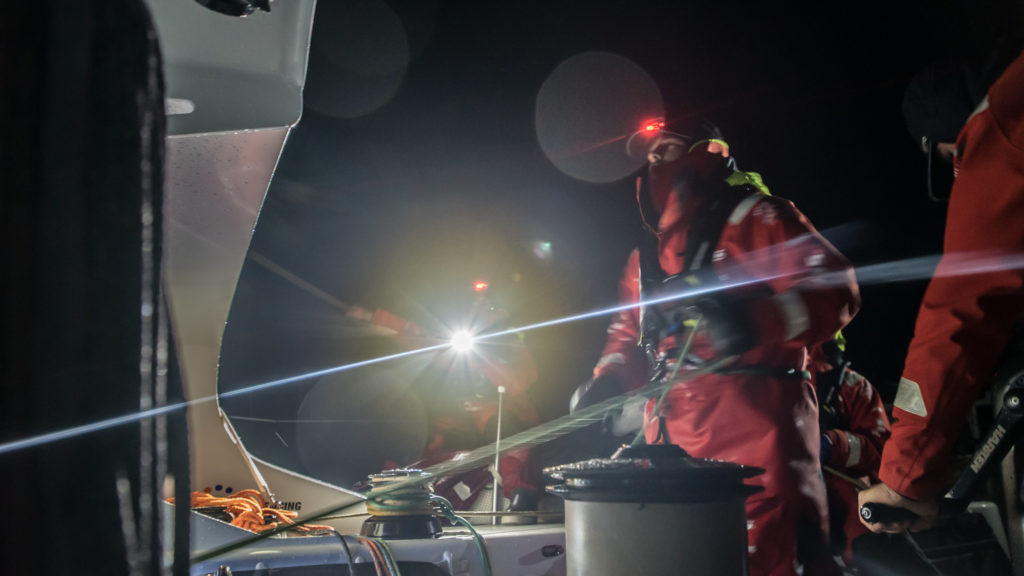 On board Vestas 11th Hour as they approach Cape Horn.
pic by Jeremie Lecaudey/Volvo Ocean

Comments on Passing Cape Horn
Team Brunel led the way past the famed Cape, with Brunel skipper Bouwe Bekking saying it was an important stage to get past.

“Well, we are finally around that Cape Horn. It didn’t come easy this leg, as everybody knows, it was a windy one,” he said.

“It’s like a mental milestone, you’re coming from the Southern Ocean and every mile you sail north the weather gets warmer and the finish of the race at The Hague is literally a step closer. It’s a magical picture and a highlight for every sailor.

“But even if we had a little celebration when we went past, we also had a toast to John Fisher, who we keep thinking about.”

There were similar sentiments from Charles Caudrelier, the skipper of Dongfeng Race Team.

“Of course the passage of Cape Horn is really nice, and usually everybody is very happy,” Caudrelier said. “But this time we can’t forget what happened to John Fisher on Scallywag, so we can’t be as happy as a normal passage.

“As in the mountains, people who are in the high peaks know the risks. It is much less common at sea, so we are much more shocked. It is a relief to have passed Cape Horn … but obviously, we think a lot about David (Witt) and his team and especially the family of John Fisher.” 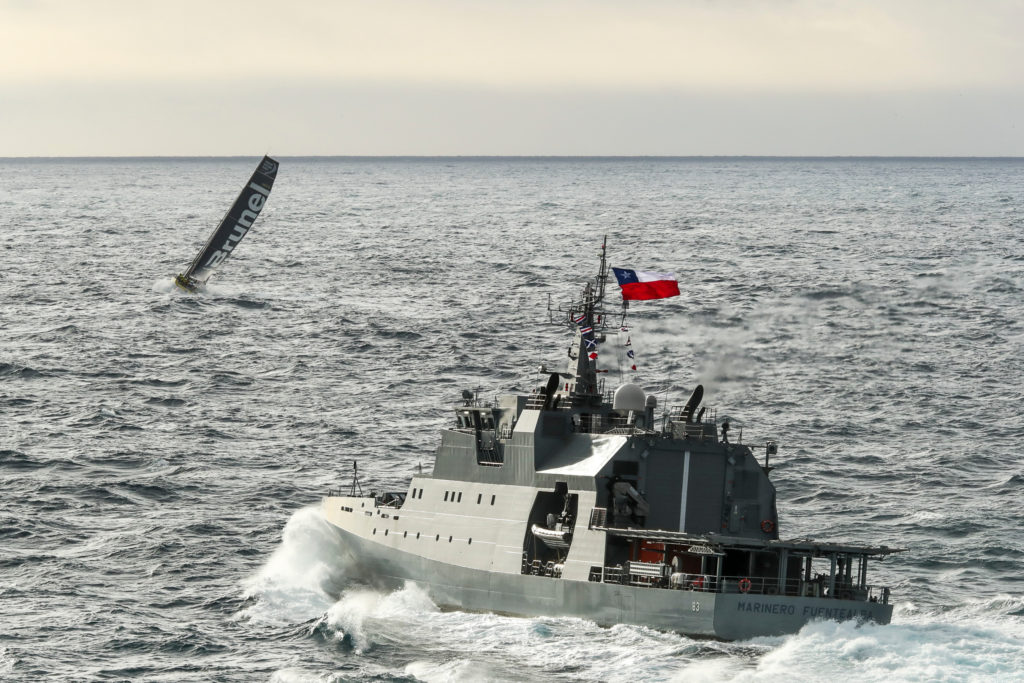 Brunel’s Cape Horn Milestones
This is the 9th time skipper Bouwe Bekking has rounded Cape Horn, also known as the Mount Everest of sailing. Prior to the leg Bekking said the following regarding the magic of the Cape.

Just after rounding Cape Horn Bekking wrote the following, as due to technical issues with the media desk video or audio isn’t possible at the moment.

Bekking: “Well finally around that Cape Horn. It didn’t came easy this leg, as everybody knows it was a windy one. 60 miles before the Cape we hit something with our rudder and than resulted in breaking the tiller arm on the rudder. This is a thick piece of aluminium which is connected to a bar, which is then connected to the steering wheel on deck. All very technical. It resulted in massive broach, with damage on our small gennicker. The problem was we couldn’t get the steerage back as the tiller arm was broken and due to the heel the windward rudder was out of the water. Finally got it back on our feet, steering with the weather rudder. But of course when the boat heels that comes out of the water, it was a rollercoaster ride.”

“Three reefs in the mainsail and a small staysail did the job, while Abby and Kyle took the emergency tiller arm out from downstairs and fixed it, all credit to them. Was costly probably lost 25 miles, but are now full up and running again.”

“This was my 9th time around, will there ever come a 10th? Right now I say NO, but we all know, never say never.”

Andrew Cape’s 10th and Last Time
For Australian sailor, Andrew Cape, it is the 10th and most likely last rounding of Cape Horn. According to the experienced navigator prior to the 7 600nm. leg: “Number ten is approaching and I think this will be the last time. There won’t be anymore”.

Langford: “Cape Horn is a massive thing in sailing. It’s the Mount Everest of sailing. There are not that many people that got around it. It’s a big achievement, something that I have wanted to do for a very long time.”