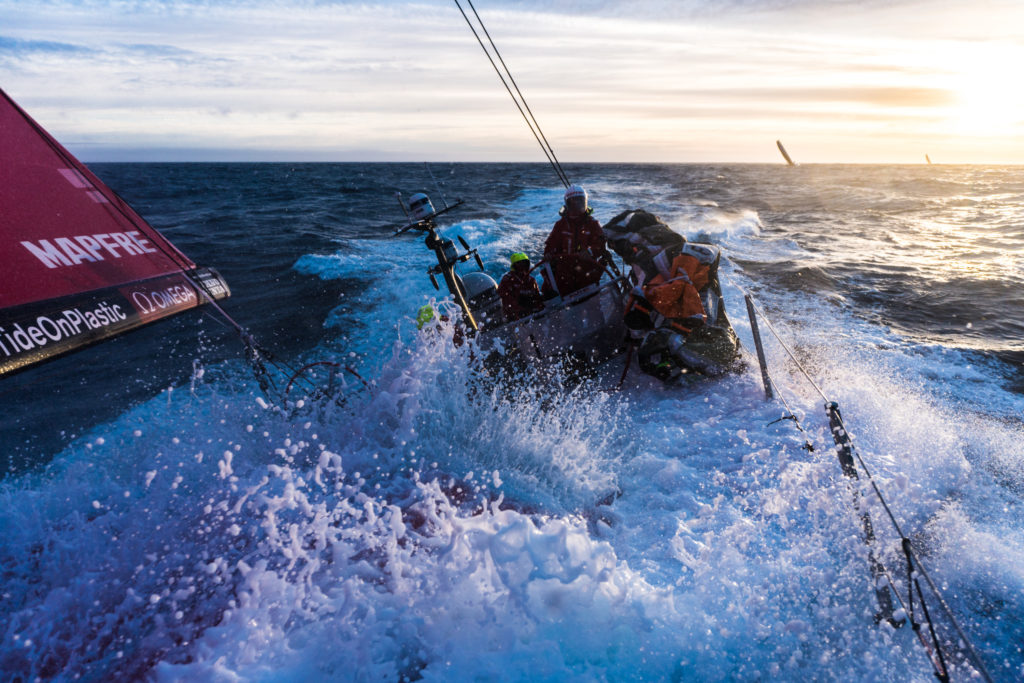 The fleet continues its relentless charge east towards Cape Horn, all the while enjoying the best the Southern Ocean has to offer.

The teams have been skirting the southern race course boundary and racing in strong but manageable winds in the 20-25 knot range which have allowed the crews to rack up 500 mile days.

But that’s all about to change.

As of this morning (Friday 06h00 UTC report), Dongfeng had taken the lead from MAPFRE, but with a mere 0.9nm advantage. 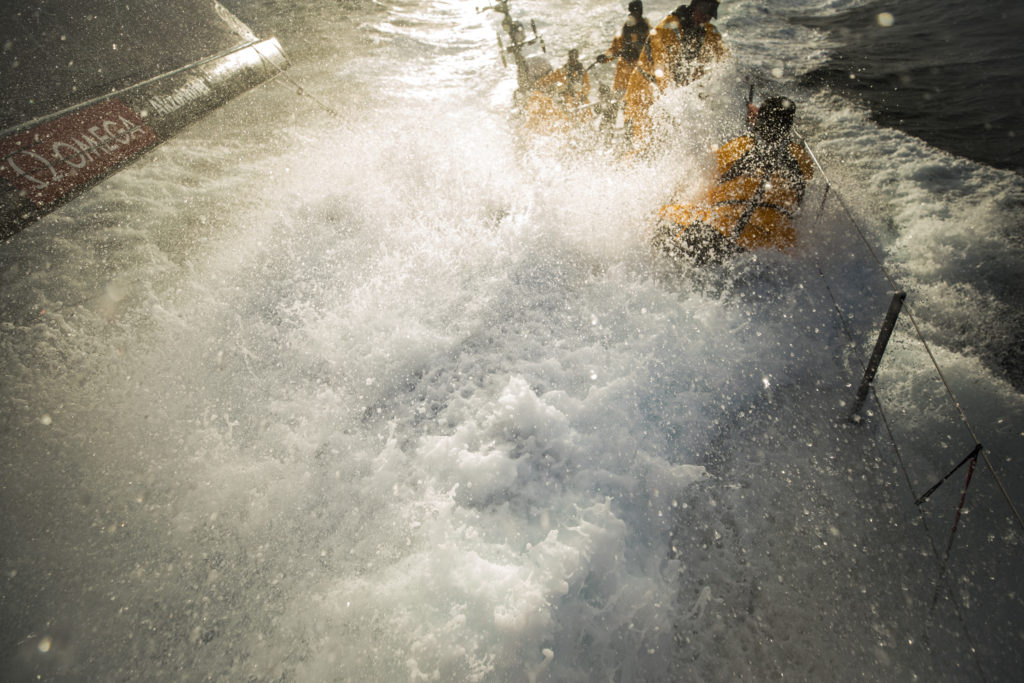 Turn the Tide on Plastic sailing through the furious fifties.
Pic by Sam Greenfield/Volvo Ocean Race

MAPFRE was the first to break from the fleet and dive down towards the ice limit. She was followed later by Dongfeng and Vestas – and once they have stopped bouncing off the ice limit it will be interesting to see who comes out ahead.

Interestingly, Turn the Tide on Plastic has had the best 24-hour run with a distance of 481.5nm, while the best overall average speed over the past 6 hours has come from Vestas with an average of 21.6 knots.

The forecast ahead is for a cold front to back the wind into the west-southwest, dropping the temperature significantly. The wind is forecast to increase to 35-40 knots, or even higher, for several days, and the accompanying sea state will make manoeuvres challenging. 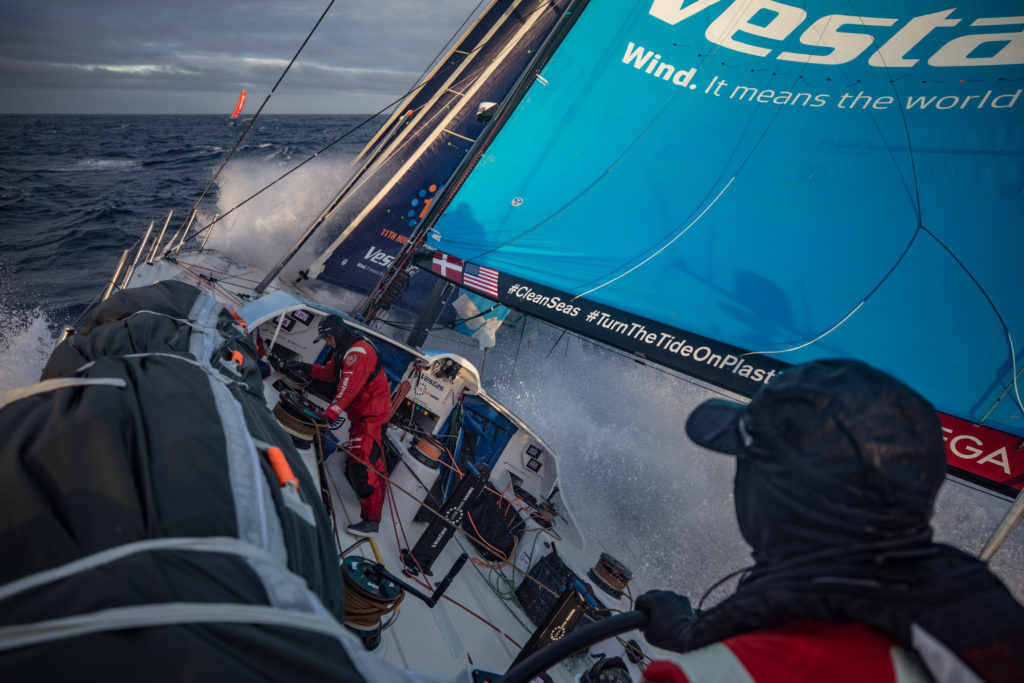 Aboard Vestas 11th Hour Toni Mutter is helming while Tom Johnson is fixing the jib. Note that Mapre is right in front of them.
Pic by Jeremie Lecaudey/Volvo Ocean Race

“So far it’s been rough, but fast,” notes Rob Greenhalgh from second-placed MAPFRE. “We’ve had 20-25 knots which is perfect. But in about 24 hours, we’re expecting an increase from the west to about 35 knots…”

The sailors will be weighing their options: they can either continue to bounce along the southern race course boundary of the Ice Exclusion Zone, or come further north, which would take them out of the strongest conditions. It’s a delicate balance of speed versus security given the heavy forecast. 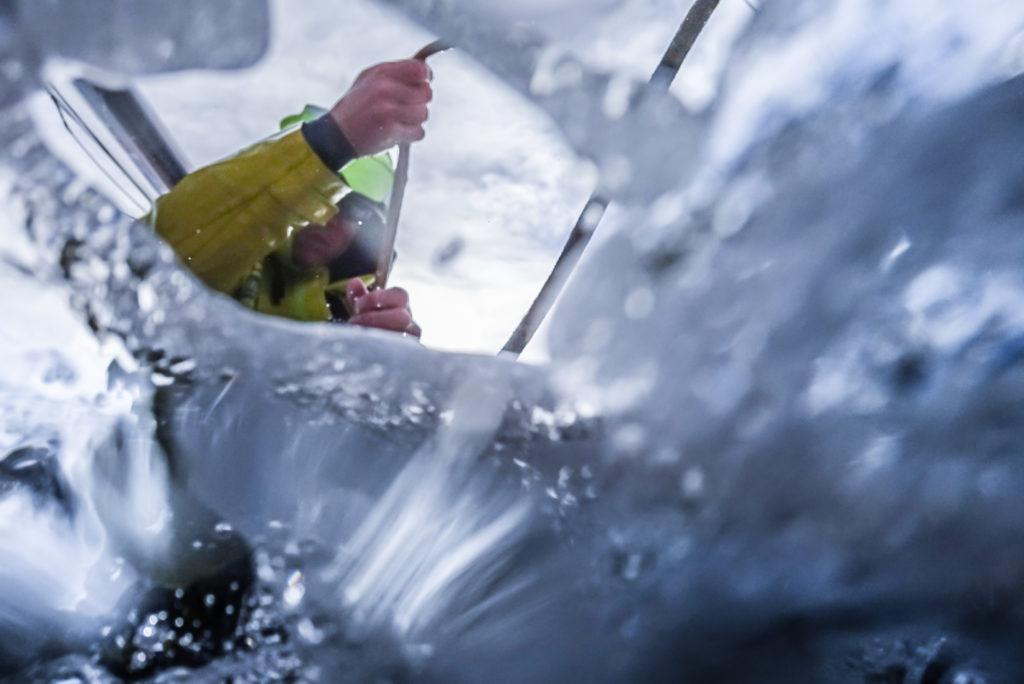 Photographer Yann Riou aboard Brunel says: “Peter Burling doing something, but I don’t know what, as I obviously was on the other side of the water curtain”.
Pic by Yann Riou/Volvo Ocean Race

Team AkzoNobel watch captain Chris Nicholson, a race veteran, is well aware of what’s ahead: “Just coming in to all that breeze, all that grief ahead… Our aim here on AkzoNobel is to get across safely and with the boat in one piece. It’s a big ask. At least a week in 30-40 knots in the Southern Ocean is just a massive, massive effort.”

Nicholson and his team held on to a narrow lead as of 1300 UTC on Thursday, just a couple of miles ahead of MAPFRE. In fact, the distance between first and fifth (Team Brunel) is less than 10 miles, making for another very close leg.

And even back to seventh placed SHK/Scallywag, sitting some 60 miles behind the leader, the weather routing projections offer hope.

“We have to keep the boat in good shape and hold it together,” navigator Libby Greenhalgh said. “It’s going to be survival for everyone. But when that strong breeze starts to ease, there’s a secondary low developing and for us that could be an opportunity to close on the fleet. At the moment I have us compressing to within about half an hour to an hour of the fleet at Cape Horn, and with 2,000 miles left to Itajaí anything can happen.”

But one step at a time – a big weekend of Southern Ocean racing is in the forecast.