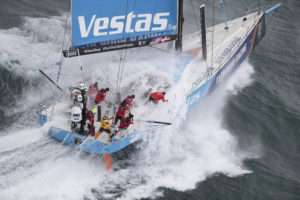 Good news for South African yachties is that Supersport will cover the Volvo Ocean Race according to the Volvo Ocean Race and its global distribution agency Sunset+Vine, the TV sports producer and distributor. They have announced their initial list of broadcast partners with an emphasis on core countries featuring boats, stopovers and sailors in the race – and a shift towards digital coverage.

On the digital side, Sunset+Vine has delivered partnerships for the race with leading online and mobile platforms such as Sina.com (China), Twitter (Global), Tencent (China), Aftonbladet Sport (Sweden), Samsung (Asia) and OutsideTV.com (USA) to bring the race’s award-winning content to smartphones, desktops and tablets.

For this 13th edition of the race, all broadcast partners will feature more race content on their online digital platforms and via social media promotions and coverage then ever before.

In a move towards the consumer’s growing taste for short-form, easily-viewed mobile content, the race has shifted its video focus from traditional television to online digital content with several types of outputs, including:

• Regular live stream each month from the port stopovers to include 90-minute livestream coverage of the in-port races, leg starts and leg finishes
• Daily online update and analysis show from race HQ
• Weekly race highlight show to catch fans up on the racing action from that week of the leg
• Daily team updates including short and easily-accessible video content posted directly from the boats on social media and other shareable platforms

“With our new crew communicator, we will have video footage going right from the boats 3,000 miles at sea into the hands of sports and sailing fans in an instant,” said Leon Sefton, Head of Television, Volvo Ocean Race.

“Enhancing longer-form television content, we want fans to catch glimpses of our race and our incredible sailing footage on their social feeds via popular sports websites and on sports news shows in their home markets throughout the nine-months of this competition.”

The introduction of the Crew Communicator, a device that will allow the sailors to supply their own digital updates, including photos and short videos, direct from the oceans will have a big impact on what fans will see and how quickly they can see it following a rule change from the race which had previously banned Internet access to the teams in order to rule out any potential outside assistance from shore.

Andrew Piller, Head of Media Partnerships at Sunset+Vine, said, “Volvo has taken an exciting new digital-first approach to this race and Sunset+Vine is delighted to have played a key role in leveraging across not just traditional television networks but also the digital and social channels.

“There are more than 100 broadcasters taking the monthly programming output yet we are equally proud of the 70-plus digital channels broadcasting live.”

“The new emphasis on digital content is a decision we made during the last cycle to provide raw and unfiltered content straight from the boats – to let the public and sports fans see what it’s like to sail around the world in some of the toughest possible conditions over 45,000 nautical miles.”