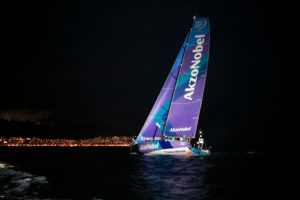 Team AkzoNobel started the final week at sea in fifth but with high hopes of being in contention for a podium place on the final run in to Cape Town.

However overnight on Tuesday November 21 the crew was the first to drop off the back of a fast-moving easterly-tracking storm system.

This allowed the top four teams – Mapfre, Dongfeng Race Team, Vestas 11th Hour Racing and Team Brunel – to quickly pull away and enabled the two chasing teams – Sun Hung Kai Scallywag and Turn the Tide on Plastic – to catch up.

To avoid sailing in the vacuum of light unstable breezes left in the wake of the storm, the three trailing teams were forced to sail a much longer southerly arc to Cape Town, skirting around the southern edge of a bulge in the St. Helena high pressure system – a route that cost them around a day and a half against the straight-line course of the leading pack.

With just a few miles separating the boats on the final day at sea, the three crews could see each other clearly – remarkable after 20 days of open ocean racing and a testimony to the close nature of the competition in the fleet of identical Volvo Ocean 65 yachts.

Despite eking out a small lead over their two rivals by the afternoon of their final day at sea, nothing was certain for the team AkzoNobel sailors as they worked unstintingly to coax every ounce of speed out of their boat.

“We need to get out our rabbit’s feet, four leaf clover, dice, and other such paraphernalia – and give them a good shake,” declared navigator Jules Salter.

In the end Salter’s good luck charms seemed to do the trick and despite briefly running out of breeze in the final three miles to the finish in the shadow of Table Mountain, team AkzoNobel secured a fifth-place finish shortly before midnight on Saturday November 25.

Team AkzoNobel skipper Simeon Tienpont said he was proud of the way the crew had performed in the face of the adversity of the final week.

“My compliments to the crew,” he said. “They never stopped pushing the whole way. It was hard to lose touch with the leaders, but we stayed positive and we had a great sailing race against Scallywag and Turn the Tide right until the end.”

Watch captain Chris Nicholson, who joined the crew for the first time in Lisbon, said he had enjoyed the leg. Even though the result was not what they had been aiming for he believes the crew has the potential to reach the podium in later legs.

“It was a fast leg with some great sailing,” he said. “A great bunch of people to race with and particularly towards the end I think we proved we have some real potential if we can just gel properly as a crew.”

Boat captain Sehested said the leg had been a tough one for the sailors, but mentally more than physically.

“We wanted more – like we always do – but we made a lot of mistakes and we need to clean that aspect up,” he said. “We need some rest but it will be quick and then we must get to work on fixing the problems we know we have. I’m confident we will come back strong.”