Vendee Globe. The Indian Has Struck 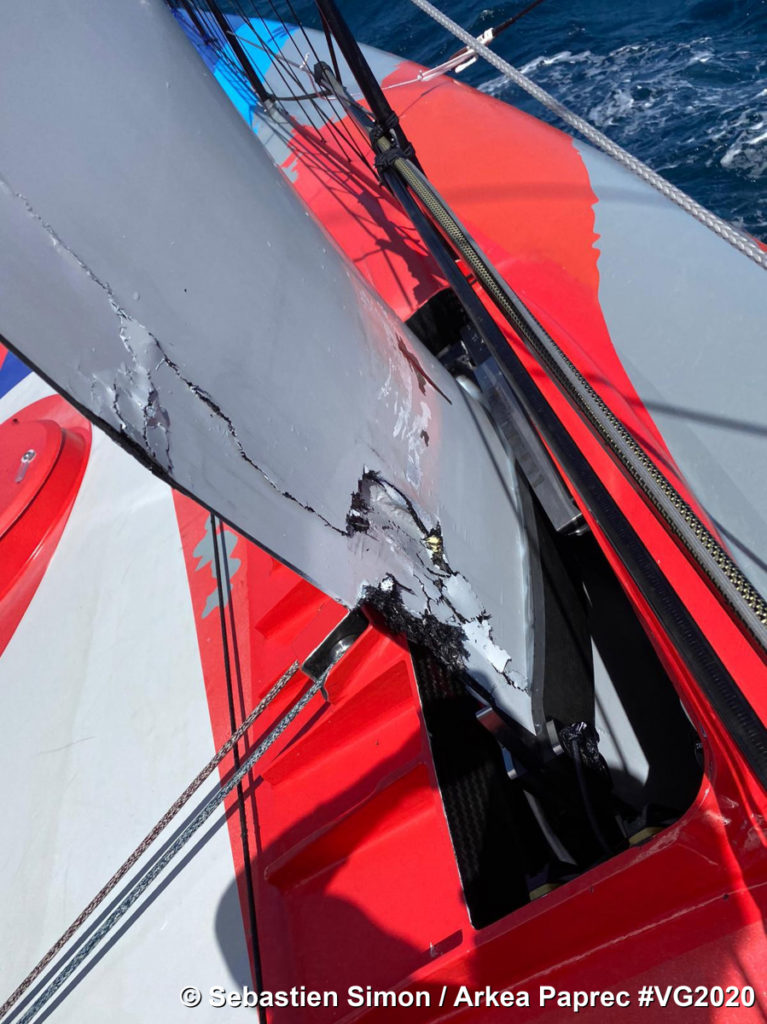 Within just a few miles of crossing from the Atlantic into the Indian Ocean, and not many hours after Kevin Escoffier was rescued by Jean Le Cam, two more skippers have reported damage.

First was Sébastien Simon who hit an object and damaged his starboard foil and the casing. He has put his race on hold while he assesses the damage and attempts repairs 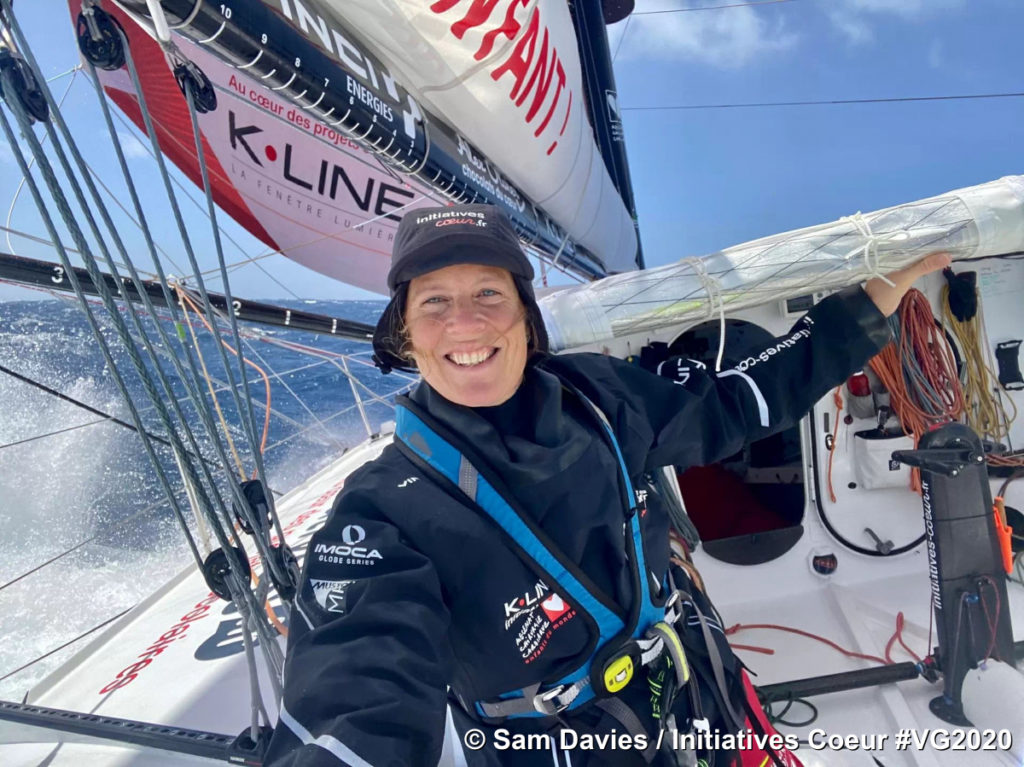 Sam Davies looking cheerful as she screamed towards the Indian Ocean where she struck an unknown object.

And no sooner had this report been received, British skipper Sam Davies informed her team that her IMOCA ‘Initiatives Coeur’ had struck a floating object at around 19H00 UTC last evening. She is heading north at reduced speed and will inspect her boat to assess the damage and discuss actions with her team. Sam Davies is unhurt.

Just 24 days into the race, two of the favourites are out, one has been dismasted, another sunk and two more are suffering from severe damage after hitting unknown objects.

Given that the Vendée Globe fleet started on Sunday 8th November in Les Sables d’Olonne with a record sized fleet of 33 IMOCAs and there are still, technically, 31 tracked on the race course it is not entirely unexpected to have no fewer than nine boats (and ten skippers) cross the longitude of the Cape of Good Hope today. But this is a unique, unprecedented statistic for a unique and ever more engaging edition of the solo non-stop round the world race. 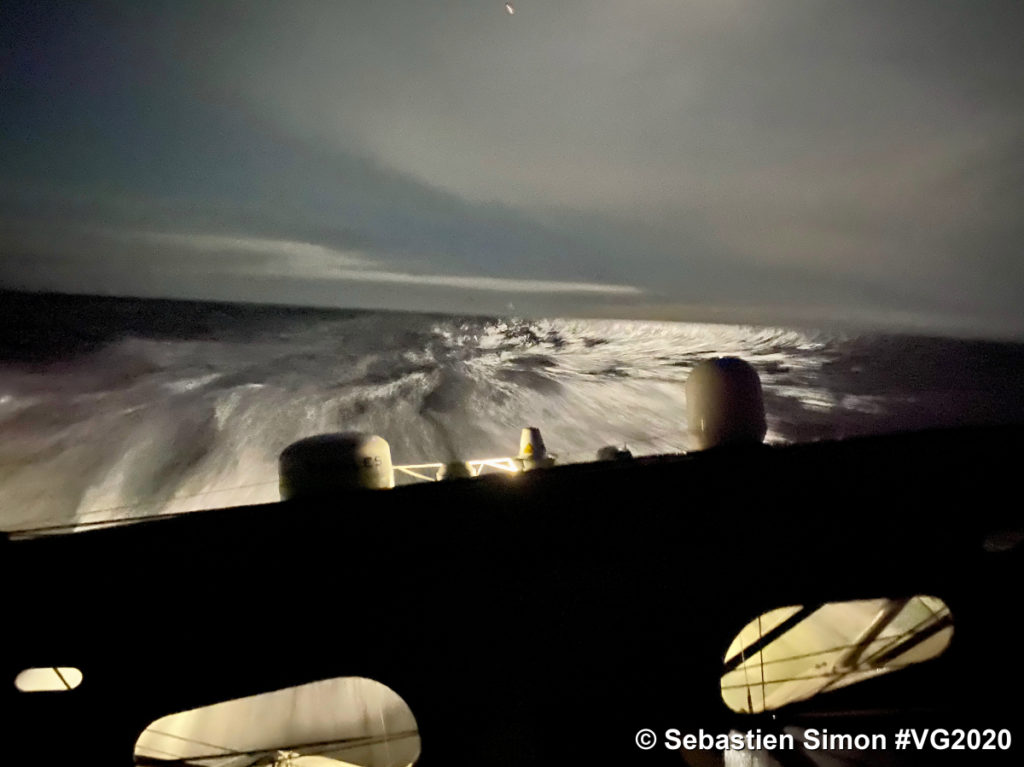 Passing at 02H30 UTC this Wednesday morning in fourth place was Sébastien Simon on ‘Arkea Paprec’. The 30 year old Les Sablais skipper has been showing good speeds in recent days on the 2020 Juan K design. But no sooner was he into the Indian Ocean than he reported substantial damage to his starboard foil and its casing after hitting an object in the water at 08H20 UTC this morning.

Simon slowed the boat which had some unspecified amount of water ingress, and had stabilised the situation, this afternoon making between eight and 12 knots on port gybe racing towards the back of a low pressure system.

The proven reliability of the 2016-17 race winning boat, now ‘Bureau Vallée 2′, and the desire and confidence to attack hard seem to be the key to Louis Burton’s progress up the leader board. So far he has routed south, closer to the ice exclusion zone and so sailing less miles but always in stronger winds and bigger seas. The 35 year old from Saint Malo was seventh on the last edition of the race, blessed with a passage through the southern oceans mostly in relatively benevolent conditions thanks to a high pressure system which he rode for weeks.

Rescued Kevin Escoffier and rescuer Jean Le Cam were called via Skype onboard ‘Yes We Cam!’ by the President of France, Emmanuel Macron who congratulated Le Cam on his seamanship, saying:

“I was reassured by the news. I am a fan of Jean’s. So I wanted to say hats off to him. We are extremely proud of Kevin and you and for the whole ‘family’ and of what you did.” Said Macron

It is still planned to drop Kevin Escoffier on a French navy frigate the ‘Nivose’ which could rendezvous with ‘Yes We Cam’ near the Crozet or Kerguelens, but this has not yet been confirmed by the authorities. If not it might be New Zealand before Escoffier could be taken off.

For all that the latest generation of high speed foiling IMOCAs are designed for top speeds of more than 30 knots, now racing in the steep, short seas of the Indian Ocean, race leader Charlie Dalin has been through his biggest storm to date and today said he is having to learn how to slow his boat and manage it.

“I am discovering something I have never had to do before.” Said Dalin, “I have to un-trim, detune my boat. I feel now 50% of the time I am trying to trim the sails and the foils and keel to go faster, and 50% of the time I de-tune the boat. I find myself looking for the brake pedal. The sea state in the Indian Ocean is really what is limiting my speed. Sometimes the boat accelerates in the surf and we go to 28-30 knots and you don’t know how it is going to end. It is a really weird to way to think, ‘I have this wind strength, this wind angle is this and I have these sails up, and I have the foil set like this, but if I change all these setting I should slow the boat down. I never had to do this before in my racing career.”

With a lead of over 250 miles Dalin admitted today he no longer routes his rivals, Burton tracking 165 nautical miles south of third placed Ruyant, not because he doesn’t care, but he considers it wasted energy when they are in different wind regimes, “I have stopped routing them. Entirely. I have voluntarily stopped taking the GRIB files back to Thomas. I cannot do that. I don’t want to know what conditions he is going to have. There is not much point. We have different weather systems, we are a bit more than 12 hours apart, so there is not much point. I focus on my race, my course. And we will see how it turns out. I have not given up. I don’t find it useful to do this.” 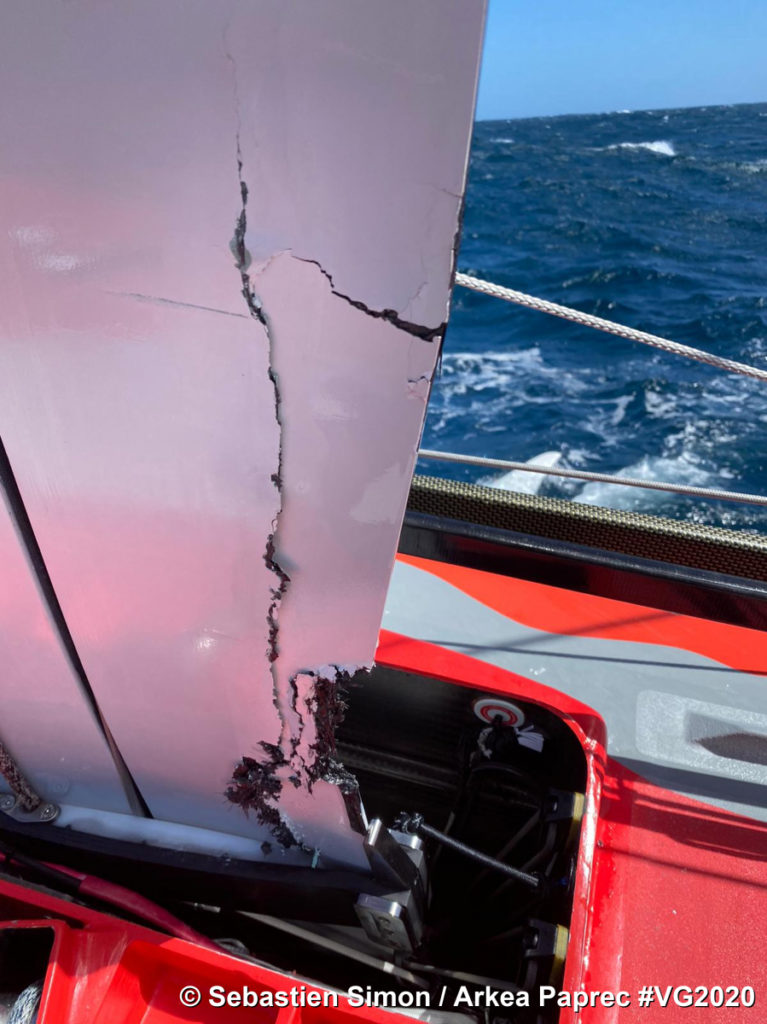 Since hitting an object and damaging his starboard foil and the casing Sébastien Simon has put his race on hold. He has been under a deep reefed mainsail and the storm jib. His safety and that of the boat is now the most important thing.

Given the tough sailing conditions forecast (more than 30-35 knots of wind with five metre waves), Simon, in agreement with his team, has decided to head north to get away from the worst of the wind and the sea. Tonight he is looking only to secure the boat as much as possible and reduce any stress on the damaged starboard foil. The objective is to limit ‘Arkea Paprec’s’ speed during the passage of the front this evening and to escape the main depression during tonight. Tomorrow, in an area which should be calmer for the IMOCA 60-footer the 30 year old from Les Sables d’Olonne will be able to study the repair possibilities more calmly and hopefully execute the repair plans as discussed with his team

Sam Davies has an interesting race on her hands, and a dilemma of sorts too. Her partner, Romain Attanasio aboard ‘Pure – Best Western’ is also racing, and was behind her when she suffered her damage. The couple have a 9-year old son who is unsure who he wants to win! It would be sad for Sam Davies should she be forced from the race, but that is just one of the challenges of singlehanded racing.