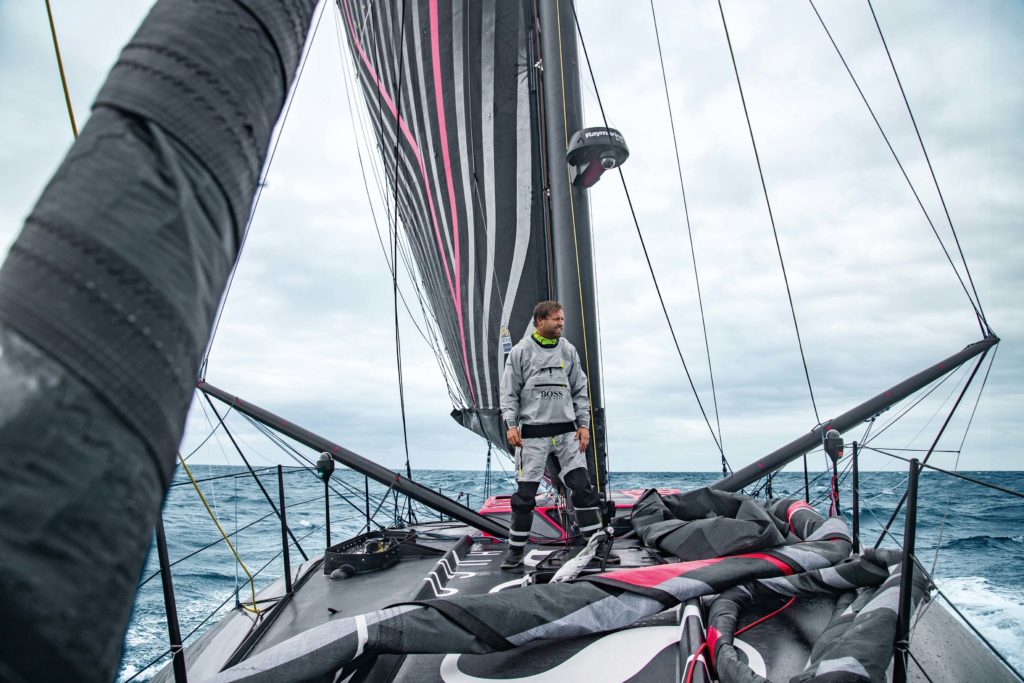 A dejected Alex Thomson on the deck of Hugo Boss having cut the keel loose.
pic by Hugo Boss

‘Hugo Boss’ has reported that after exhausting all the options, they had decided to cut the keel off their 60ft monohull after damage forced them to withdraw from the 14 edition of the Transat Jacque Vabre Normandie Le Havre on Sunday.

“Last night Alex and Neal were both able to get some rest on board ‘Hugo Boss’,” Ross Daniel, Technical Director at Alex Thomson Racing, said. “In the early hours of this morning the skippers resumed their attempts to stabilise the keel.

“Despite their very best efforts, it became clear that keeping the keel attached would put the boat at great risk. With the keel attached only by the hydraulic ram, and in an unstable position, there was a serious risk of significant damage to the hull.

“We did everything that we could to preserve the keel but collectively we determined that it was far too dangerous to keep it in place.

“Therefore, with guidance from our team shore-side, Alex and Neal set about cutting the hydraulic ram to free the keel from the boat. After many hours, they were successful in their efforts and the keel is now no longer attached to the boat.”

‘Hugo Boss’ had completed just over a third of the 4,350-mile course of this biennial double-handed race to Salvador de Bahia, Brazil – the longest and toughest in the sailing calendar – when they informed the race office that they collided with an unknown object.

The newly-launched and much admired ‘Hugo Boss’ is in the middle of the Atlantic Ocean, and now about 460 miles southwest from Madeira and 400 miles northwest of the Canary Islands.

“Alex and Neal have filled the ballast tanks on board and fully extended the foils in order to keep the boat as stable as possible,” Daniel said. “They are currently in light winds and a slight sea state, and we are comfortable that there is no immediate risk to the boat or the skippers.

“The next step is for us to put together the best possible strategy to bring the boat slowly and safely to port. We are currently exploring various options and will provide an update in due course”. 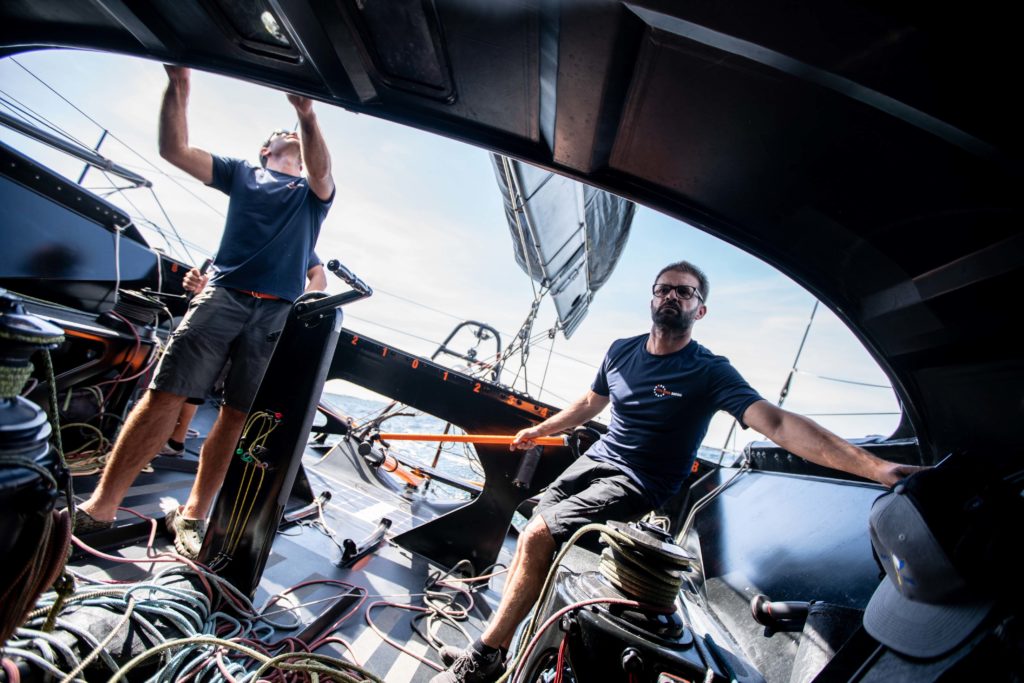 IMOCA: 11th Hour Racing on the charge
At the latest ranking, the fastest boat in the leading group was Charlie Enright/Pascal Bidegorry on the 2015 foiler, ‘11th Hour Racing’. ‘Charal’ may be the most optimised of the new foilers, but they are feeling the heat from behind as they seek the best angle into the Doldrums.

Angles and wind shadows are a feature of this course, where milestones can become millstones if skippers get the passage past (or through) Madeira, the Canary Island and Cape Verde wrong.

In what are proving to be particularly unstable trade winds, ‘11th Hour Racing’ benefited from being further west, but they are undoubtedly fast and Enright, on debut, is looking for more than the third step of the podium.

Britain’s Samantha Davies has climbed back two places into sixth on ‘Initiatives-Coeur’, 162 miles behind the leader. She began her overnight message to the race office in confessional mode: “Eight days ago, on the first night of the TJV, in 30+ knots of wind, our big gennicker (or A3 in sailing terms) blew out,” she wrote. The good news is they may not need it again and the Doldrums offers a real chance of podium place.

Class40: Who can beat Crédit Mutuel
After entering the trade winds overnight, the four boats at the front of the fleet have lengthened their stride and taken significant advantage over the rest of the fleet. It is advantage which grew significantly during the day as the newer boats sped away under spinnaker.

After a tough first week, they should now accelerate all the way to the Cape Verde islands. For all the efforts of Britain’s Sam Goodchild and his French co-skipper Fabien Delahaye on ‘Leyton’ in second, the newly-launched ‘Crédit Mutuel’ (Ian Lipinski and Adrien Hardy), clearly has the edge at the moment, and has shown it in a variety of different conditions over the past few days.

‘Crédit Mutuel’ had extended the lead over ‘Leyton’ to 30 miles, after covering 20 more miles (290) in the last 24 hours. ‘Aïna Enfance’ and ‘Avenir’ were a further seven miles behind in third.

“We have 15 -18 knots and an easy sea,” Lipinski said this morning “This is the third idyllic night since the start. We haven’t touched the helm since Ushant (after the first night).

“The passage through the ridge went well, without any particular complication, and we’re as happy looking at our track on Adrena, as a skier looking back at his track after descending a slope.”

A little like in the IMOCA, small Class40 groups have formed and they are having their own races-within-the race. We will have to wait until the entire fleet has passed the Canaries to establish a reliable hierarchy within the fleet of 22 duos still en route to Salvador de Bahia.