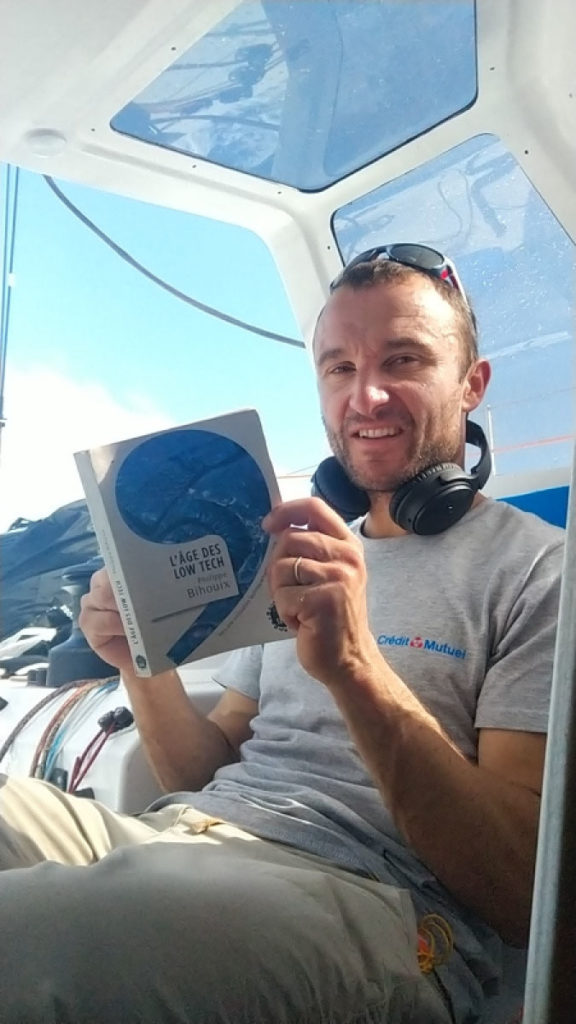 How’s this for being relaxed aboard Crédit Mutuel while breaking a record!
Pic by Transat Jacques Vabre

It is no one-off wonder. They have broken the old 24-hour record several times over the last couple of days and have been over 400 all morning in their new David Raison-designed 40-footer launched this year. They have only had a couple of months training, so they are still learning about the new boat, with its most obvious innovation being its pronounced nose. One thing they have learned is that with the correct and well-trimmed set-up they can leave the autopilot to it. They have not touched the helm since Ushant, the morning after the start.

“The boat is going on its own, we found the right sails, we’re monitoring it, but its going alone,” Lipinski said this morning. “We’re under medium spinnaker with 1 reef and 2 reefs in the mainsail. We’re getting around on all fours, the boat slams lot, we’re trying not to hurt ourselves. It’s a bit wet on deck, but I think it’s nothing compared to those behind us.” 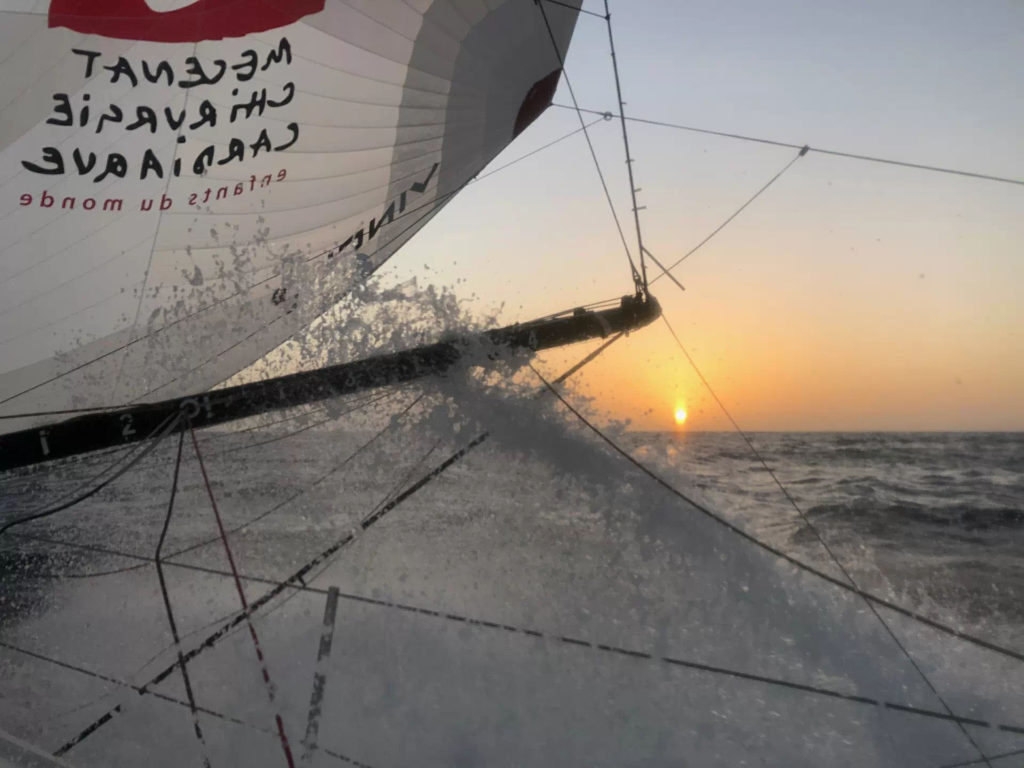 Now past the Cape Verde islands, ‘Crédit Mutuel’ was 81 miles ahead of Leyton and 89 miles ahead of ‘Aïna Enfance & Avenir’. Both have both been regularly touching the old 24-hour record in their Manuard mach 3 boats, but are losing miles at every ranking. All three will have ‘Charal’ on their minds with the Doldrums looming.

And the reason for them having ‘Charal’ on their minds is that ‘Charal’ stalled in the doldrums. Well not quite stalled in real terms, but Jérémie Beyou and Christopher Pratt on ‘Charal’ watched their 100-mile lead turn into a 50-mile deficit after less than a day in the dreaded Doldrums. It was heartbreaking for ‘Charal’, but the air taken from them has breathed life into the podium race. Sometimes the Doldrums slams on the brakes, and sometimes they give you a break. 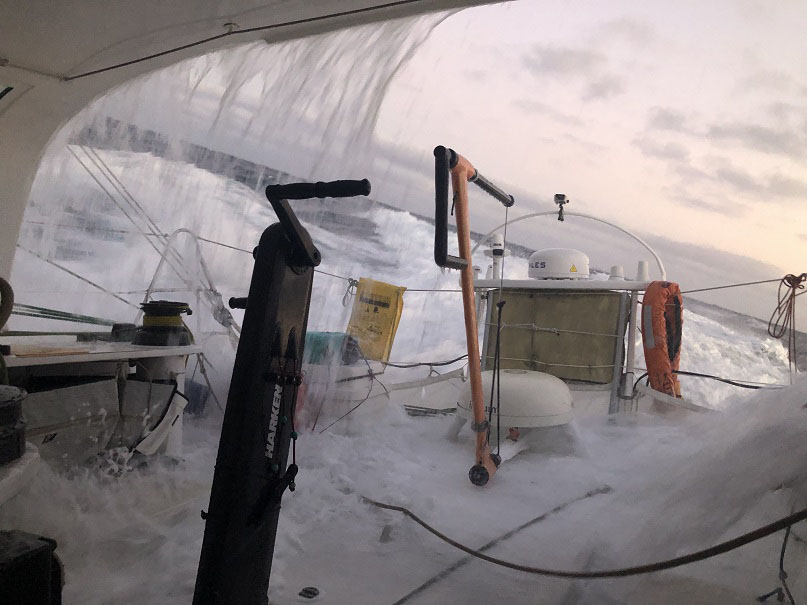 Despite that setback ‘Charal’s’ speeds are now back up and they appear to have stemmed the losses and are back hunting ‘Apivia’ which had swept past 50 miles to the east of ‘Charal’, into a 48-mile lead. ‘Charal’, the favourite and the most optimised and practised of the five latest generation foilers in the race, had made just 106 miles. ‘Apivia’ had made 273.

‘PRB’ are in third place another 52 miles behind ‘Charal’, but after that just 40 miles separate 11 boats. 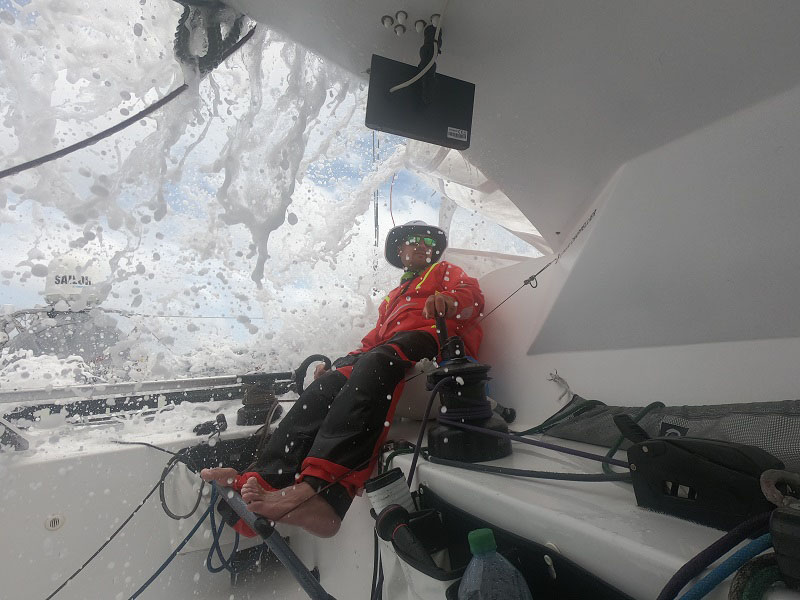 Boris Looks At Greta Options As Deadly Doldrums Strike
Germany’s Boris Herrmann said that he had been discussing options for getting Greta Thunberg back to Europe by boat after the COP25 Climate Change Conference was moved from Chile to Spain. Herrmann delivered Thunberg to the UN Climate Change Summit in New York in August on his 60ft monohull, ‘Malizia II – Yacht Club de Monaco’, but said “We’re just not the right boat at the moment to take her back.” That is understandable given that Herrmann and his co-skipper, Britain’s Will Harris, are currently pushing hard in the 14th edition of the Transat Jacque Vabre Normandie Le Havre.

“Our team is in contact with her,” Herrmann said. “Since we sailed together across to New York we have always kept in contact, trying to help with connections for the journey and I was asked a few questions about “what do you think about this option?” It’s a very friendly relationship full of trust.”

After being part of the group that went far west after the start only for it not to pay out in fairly spectacular fashion, Herrmann had talked about being out of the race, but he and the rest of the group have almost caught up now. The front of the IMOCA fleet are in the Doldrums and if it causes them as many problems as it did ‘Charal’, the comeback could be even greater.

“The entrance to the Doldrums slows everyone and we will too eventually, most likely, it’s a question of luck,” Herrmann said. “‘Charal’ was really unlucky, being stopped for almost one day. I feel really quite sorry for them, seeing that they didn’t move at all last night – that must be quite stressful.

“We’re very happy considering where we stood three days ago, whoever gets out first from the Doldrums will extend away again.”