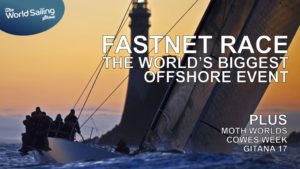 The World Sailing Show provides a monthly view of the racing world. From non-stop around the world racers, to Olympic campaigns; from seasoned professionals, to grass roots sailors, the joint initiative between TV producers Sunset+Vine and the sport’s governing body World Sailing covers a wide range of racing activity around the world.

The programme is distributed globally to 51 broadcasters in 197 territories. The series is produced by renowned sailing journalist Matthew Sheahan.

The Rolex Fastnet Race – A record fleet
It took just 4 minutes and 24 seconds for the 2017 Rolex Fastnet Race to sell out. Eight months later, another record was set as 362 boats started the 605nm classic from Cowes, the biggest fleet in the history of the event.

It was also the most diverse. From the 115ft superyacht Nikata to the 100ft carbon rocket ship CQS, the record breaking MOD70 Concise 10 and the racing maxi Rambler 88, there were plenty of large carbon machines looking for victory.
In addition, there was a big fleet of IMOCA 60s and an even bigger group of their smaller sisters, the Class 40s.

Yet the bulk of the fleet remained Corinthian. From crews focused on the silverware, to those realising a personal ambition, amateurs versus professionals, each had their own agenda in this legendary race.

A champion of champions event if ever there was.

Launching the maxi trimaran Gitana 17
She’s been designed to scorch across oceans in some of the world’s biggest and longest races. But her longer term goal is to set a new world record for a non-stop lap of the planet. At 32m long, 23m wide and weighing just 15 tonnes she’s a lightweight beast of a boat in anybody’s language. But she’s been designed to fly, a move that that could change the future of offshore racing.

We meet the boat and her creators to find out the thinking behind this bold new project.

Lendy Cowes Week
It is the biggest, most diverse annual regatta of its kind in the world drawing the best sailors and their boats to an event like no other. This year a prestigious new series drew in some of the big guns including the new Volvo Ocean Race fleet.

But Cowes Week is as much about grass roots sailing as it is about the glitz and glamour and this year there was plenty of both, including some impressive and motivating performances.