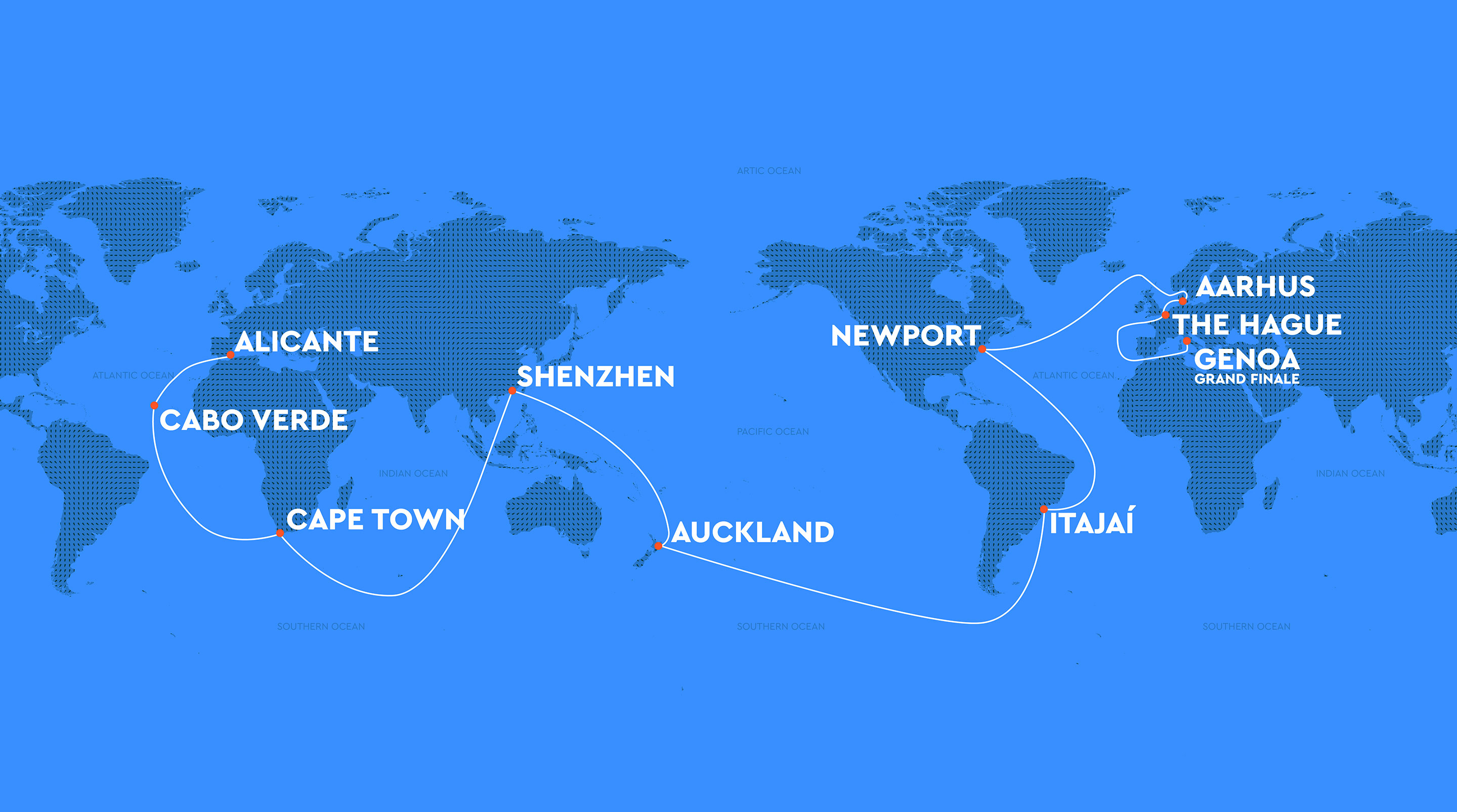 The next edition of The Ocean Race, scheduled to start from Alicante, Spain in October 2021, will visit 10 international cities, including the start port and the Grand Finale finish in Genoa, Italy in the summer of 2022.

For the first time, The Ocean Race is now open to the high-tech, foiling IMOCA 60 class, in addition to the one-design VO65 boats that provided record-breaking performance and such close, compelling racing in the 2017-18 edition of the race – the closest Race of all-time.

“As we open up the design and innovation elements of the race again with the IMOCA class, confirming the race route for our teams has taken on an added importance as the designers look to optimise performance for the conditions,” said Johan Salén, the Managing Director of The Ocean Race.

“This route is more compact at 38,000 nautical miles and with two less stopovers compared with the last race, but it includes two significant Southern Ocean legs, where crews on both the IMOCA 60s and the VO65s will have an opportunity to add their stories to the legend of this race.”

“This new race route respects our heritage as an event that crosses the world’s oceans, leaving the great capes of the southern hemisphere to port, and diving into the Southern Ocean on the approach to the iconic Cape Horn,” said Richard Brisius, Race Chairman of The Ocean Race.

“With seven returning stopovers and three new host cities, there is a good balance between stability and exploration, as the route will take us through the Java Sea, near Indonesia, for the first time.

“As ever, The Ocean Race appeals to athletes and teams who want to compete against the best in the world and add their name to the list of the legends of our sport who have defined their careers by taking on this incredible challenge.”

One of those sailors is Carolijn Brouwer (NED), who became one of the first women to win The Ocean Race as part of the victorious Dongfeng Race Team in the last race. In the 2021-22 edition, all race teams, in both classes, will be required to have female crew members.

“To lift The Ocean Race trophy with Dongfeng Race Team in 2017-18 was a dream come true for myself and the team, and it’s an honour to be counted amongst so many legends of the sport as a winner of this amazing race,” Brouwer said.

“The 2021-22 race course keeps the Southern Ocean at the heart of the race, and the new foiling IMOCA boats plus the returning VO65s means more epic racing and great human stories.”

The introduction of the IMOCA fleet into The Ocean Race presents a new opportunity for sailors to race in the world’s most challenging and competitive fully-crewed event.

Paul Meilhat, the winner of the 2018 Route du Rhum and the current leader of the IMOCA sailor rankings, is among those looking to make the transition.

“The Ocean Race is one of the most global events in sport, and the racecourse for 2021-22 underlines why it is so special – with some of the best offshore sailing conditions around, and a massive commercial reach touching six continents,” he said.

“It has long been my dream to compete in The Ocean Race and test myself against the best sailors in one of the most challenging races in the sport.”

This edition of The Ocean Race is also reaching beyond sport – with the support of Premier Partner 11th Hour Racing and Race Partner Bluewater, sustainability initiatives have been embraced into all aspects of The Ocean Race.

Building on a legacy from the last edition, The Ocean Race 2021-22 will feature a new series of The Ocean Race Summits (the first took place in Genoa, Italy in September of 2019), an expanded version of its award-winning learning curriculum for schools, and a robust science and data programme. Additionally, all race teams will be required to use renewable sources to generate a proportion of the energy used on board in both the IMOCA and VO65 fleets.

The 2021-22 edition of The Ocean Race is scheduled to start from Alicante, Spain in October of 2021 and stopover dates will be confirmed in due course.

The organisers of The Ocean Race look forward to the start of the race in 18 months and are fully committed to holding a successful event. Given the uncertainties related to the current coronavirus pandemic race organisers are in ongoing conversations with medical experts and authorities and following their advice. As always, the health, safety and well-being of The Ocean Race family and all race stakeholders is a top priority.