The Golden Globe Race. Back to the Traditional ‘Roots’ of Sailing 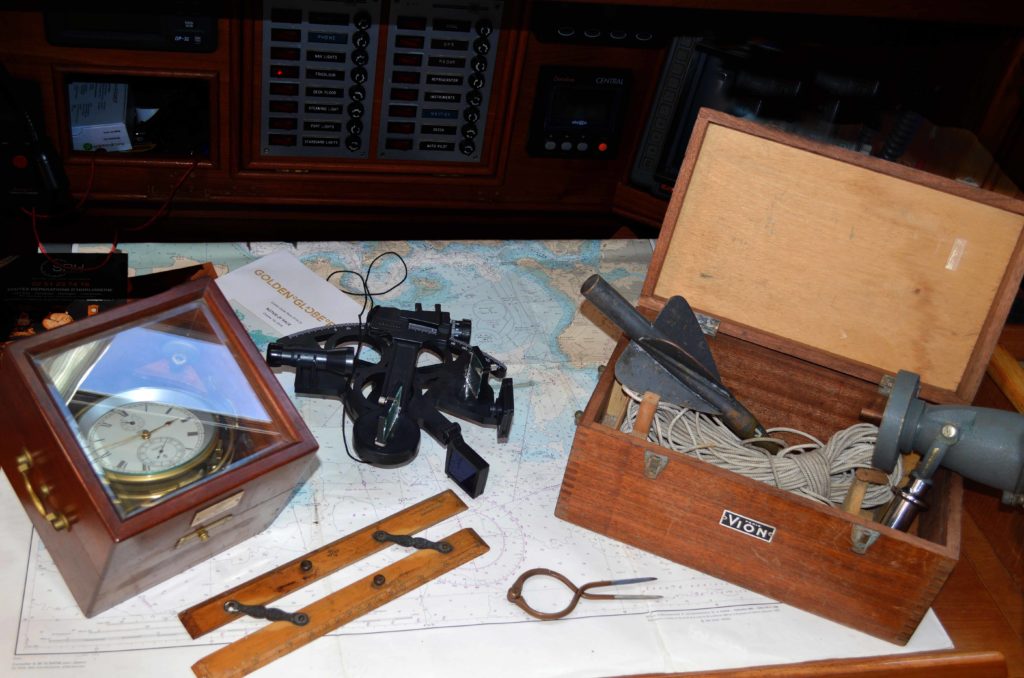 Traditional navigation equipment to be used by skippers in the GGR: Wind-up chronometer, sextant, paper charts, parallel ruler, protractor and trailing log, just as it was 50 years before for Robin Knox-Johnston and Bernard Moitessier.
Pic by Barry Pickthall/PPL/GGR

It’s been likened to ‘stepping back to the Golden Age of solo sailing’ as the Golden Globe Race is a 30,000 miles non-stop passage around the world via the five Great Capes – ALONE – and with NO outside assistance.

For those who follow sailing closely they will know that the race is being reenacted to celebrate Sir Robin Knox-Johnston’s historic 1968/9 world first solo non-stop circumnavigation in the Sunday Times Golden Globe Yacht Race – that’s 50 years ago now!

Entrants are limited to sailing similar yachts and equipment to what was available to Sir Robin in that first race.

That means sailing without modern technology or benefit of satellite based navigation aids. 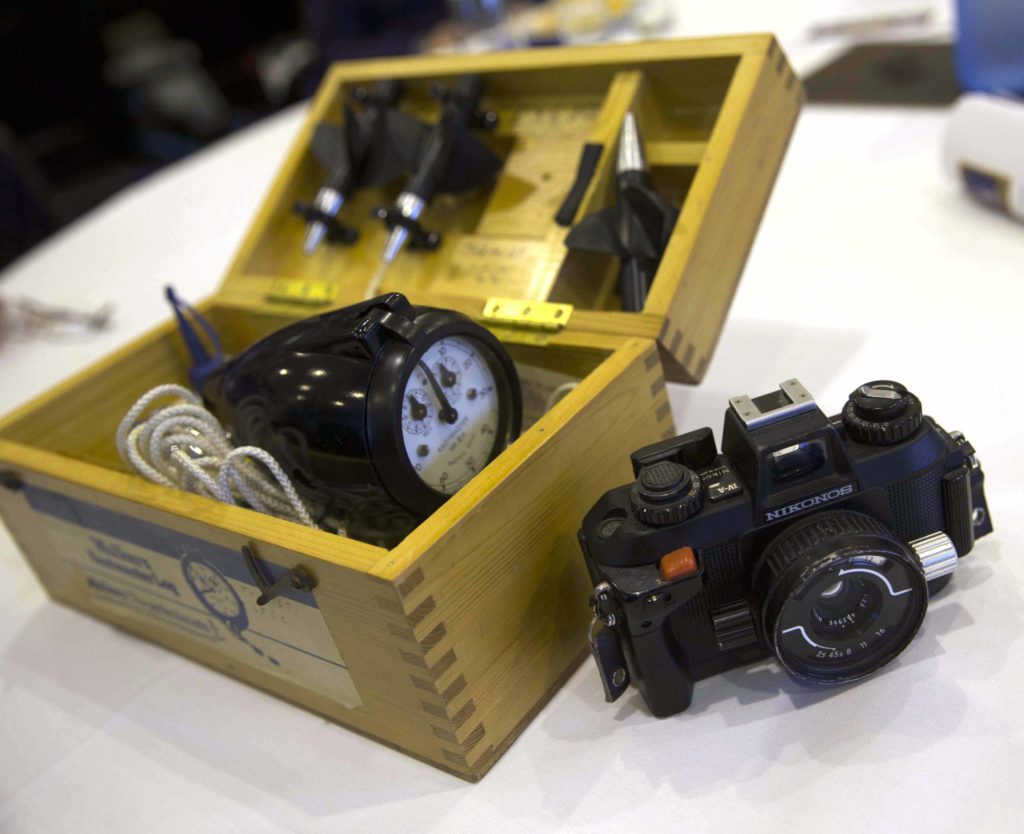 The type of non-digital equipment GGR entrants will carry aboard – traditional Walker speed log and a Nikonos waterproof 35mm film camera. Items that were not available to Sir Robin Knox-Johnston during his record setting solo circumnavigation back in 1968 are banned. That includes GPS, satellite phones, iPods, electronic sailing instruments and digital cameras.
Pic by Tim Bishop / PPL

Competitors must sail in production boats between 32′ and 36′ overall (9.75 – 10.97m) designed prior to 1988 that have a full-length keel with rudder attached to their trailing edge. These yachts are heavily built, strong and sturdy, similar in concept to Sir Robin’s 32′ vessel Suhaili which was a slow, sturdy 32′ double-ended ketch. She was heavily built of teak and carried no computers, GPS, satellite phone nor water-maker, and Robin completed the challenge with no outside assistance or aid of modern day shore-based weather routing advice. He had only a wind-up chronometer and a barograph to face the world alone, and caught rainwater to survive. 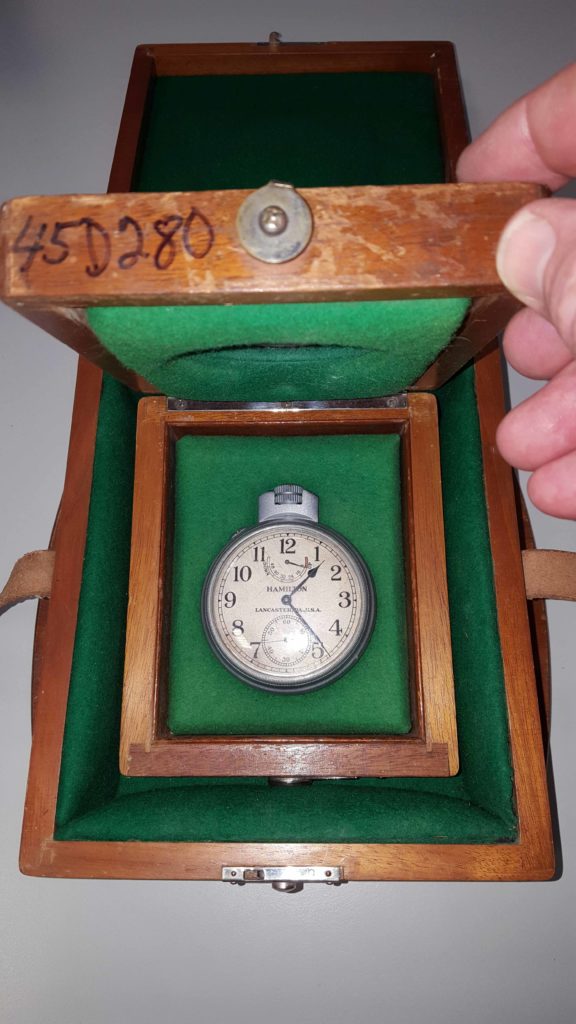 This circa 1946 48-hour Hamilton deck watch has been stripped and rebuilt as new, and will be aboard Mark Sinclair’s Coconut. It runs 3 seconds fast per day and will be stored flat onboard and wound daily at same time (straight after meridian passage).
Pic by Mark Sinclair/GGR/PPL

Competitors in this race will be sailing simple boats using basic equipment to guarantee a satisfying and personal experience. The challenge is pure and very raw, placing adventure ahead of winning at all costs. It is for ‘those who dare’, just as it was for Sir Robin. They will be navigating with sextant on paper charts, without electronic instruments or autopilots. They will hand-write their logs and determine the weather for themselves. Only occasionally will they talk to loved ones and the outside world when long-range high frequency and ham radios allow.

So out have come the sextants and nautical tables, old fashioned chronometers and even those ‘old’ Walker trailing logs** some of us still remember from our very early offshore sailing days.

[**ED. I have 2 Walker Trailing Logs in my possession – both brand new and still in their boxes, and UNUSED as they still register 0 on the display. My favourite is the Walker’s “Cherub” III Taffrail Ship-Log which still has 2 spare glass faces for the display, plus the original tin of oil with which to lubricate it, plus 2 taffrail mounting brackets. The other is the Walker’s “Excelsior” IV Patent Log. Both are for sale – enquiries to: editor@sailing.co.za ] 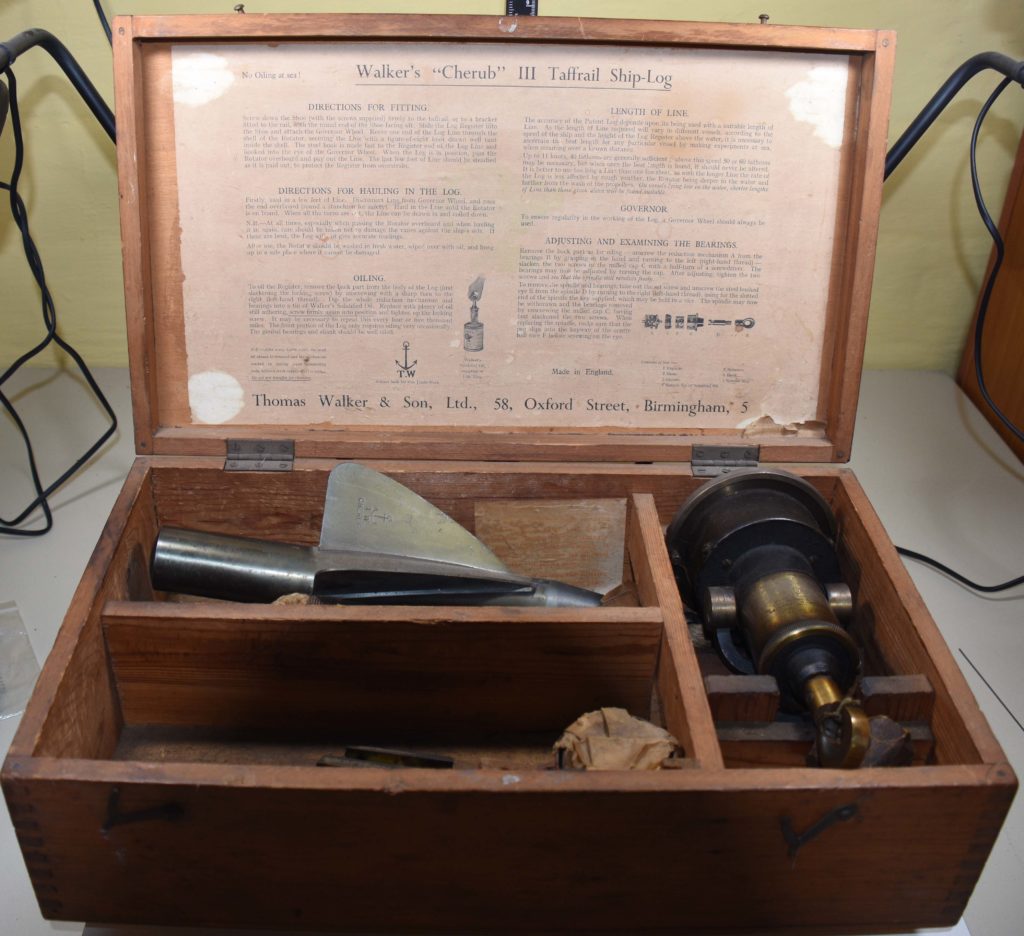 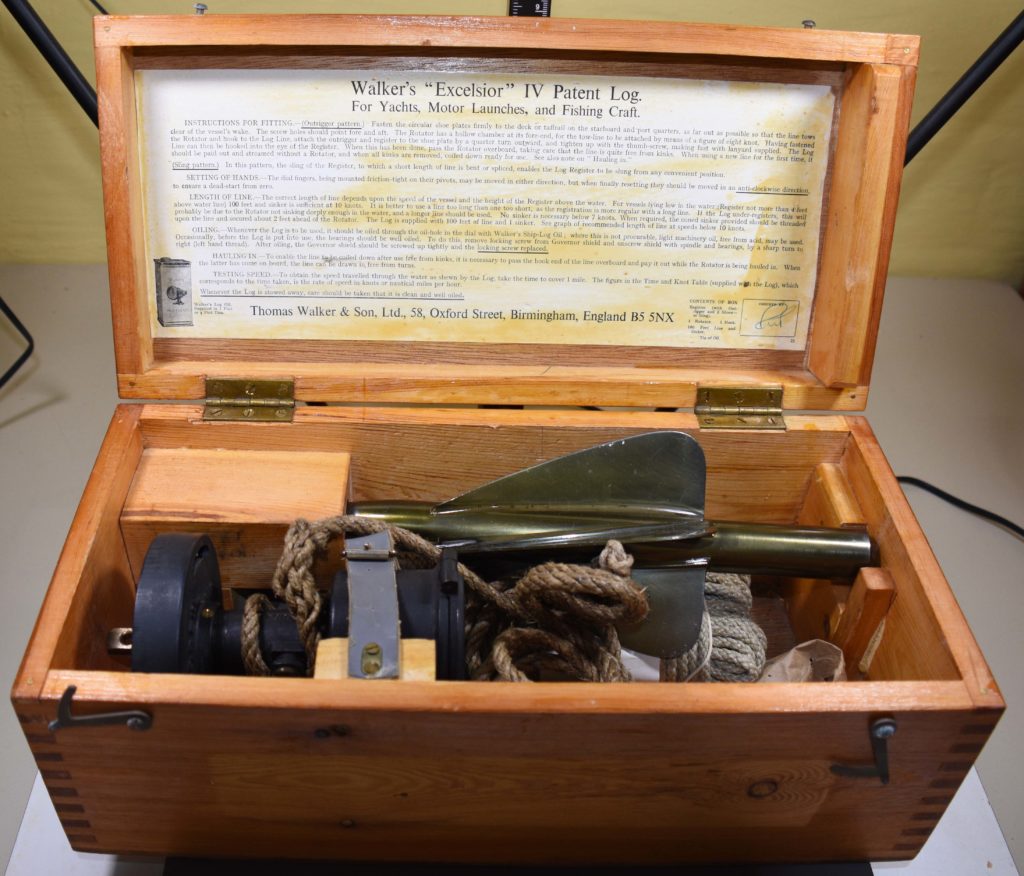 It is now possible to race a monohull solo around the world in under 80 days, but sailors entered in this race will spend around 300 days at sea in little boats, challenging themselves and each other. The 2018 Golden Globe Race will be a fitting tribute to the first edition and it’s winner, Sir Robin Knox-Johnston.

Each entrant will be supplied a standard Race Pack by the event organisers. The technology may change, but it will include, but not be limited to: 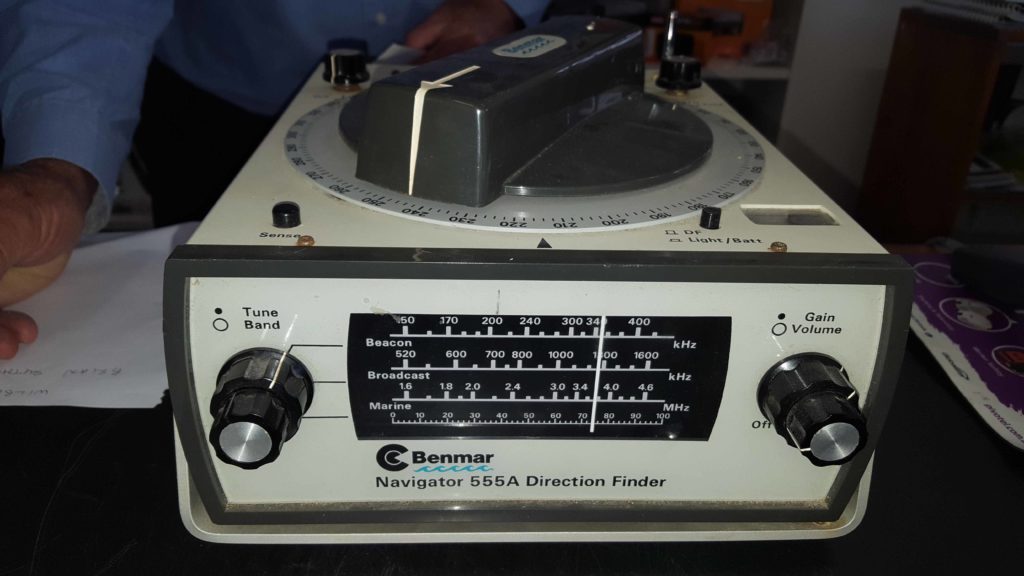 This Benmar Navigator 555A radio direction finder will be aboard Mark Sinclair’s Coconut.
Pic by Mark Sinclair/GGR/PPL

All Entrants will be tracked 24/7 by satellite, but competitors will not be able to interrogate this information unless an emergency arises and they break open their sealed safety box containing a GPS and satellite phone. Doing this however, has consequences. By breaking the seal, competitors will be deemed to have retired from the Golden Globe Race.

Don McIntyre, Race Founder and Chairman – about the 2018 Golden Globe Race:
“I was first exposed to the inaugural 1982 BOC Challenge Around Alone Race during the Sydney stopover, working on Aries wind vanes used by competitors. I spent time with them all. We laughed together and I heard their stories. I met my boyhood champion, Robin Knox-Johnston and was hooked.

“I decided to compete in the 1986 event, but with a part built boat, I ran out of time, so had to be content in the roll of Sydney BOC Race Chairman that year. Competing in the 1990-91 BOC Challenge was one of the highlights in my life. On reflection, I always considered myself lucky as, in my opinion, it was the last of the ‘Adventure events’. Each future race became increasingly performance orientated, sailed by elite sportsmen and women in ever more extreme yachts, focussed on winning at all costs. Nothing wrong with that, in fact it was and still is incredibly exciting, but it was simply a lot more of an adventure in 1990.

“My dream to sail solo around the world was borne of inspiration gained while following the solo voyages of Francis Chichester, Robin Knox-Johnston and Bernard Moitessier, and reading about Chay Blyth, Blondie Hasler and others from the ‘Golden Age’ of solo sailing. That was an exciting period!

“In 2008, I saw Sir Robin Knox Johnston speaking on the occasion of the 40th Anniversary of his record setting 1968 non-stop circumnavigation. Referring to the current space-age building materials, high tech satellite systems and computers supporting today’s solo sailors, he simply said (by comparison to his own experience back then) “This takes the spice out of it!”

“Well the 2018 Golden Globe Race very definitely puts the spice back into it and by world standards, offers a very unique and demanding challenge to any sailor who’s up for it. That same year, Robin was asked: “What would you say to sailors thinking of circumnavigating?” His response: “My advice to them would be quite simply this. If you’ve got the idea, and you want to do it, then do it. Don’t let ANYTHING get in the way. Far too many people sit in yacht clubs talking about it but then never do it. DO IT! You’ll never regret it.”

“He’s right of course. I am looking forward to stepping back and doing it again myself, the “Spicy” way, in the 2022 Golden Globe Race. Over the years I have personally supported many young solo sailors, men and women, to achieve their dreams. I hope this event will let many more and maybe you achieve yours! I look forward to meeting you at the start”