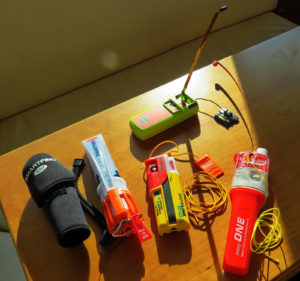 Now here is a very interesting editorial that all owners of offshore keelboats should read as the info contained herein may well stand them in good stead at some point in the future.

It opens as follows:
Given my accidental activation of an AIS MOB beacon a few weeks ago, it seemed like a good time to test beacons again. I hoped to at least see all the major brand multifunction displays properly react to an AIS MOB test transmission, putting up the distinct safety message that I should have seen during “the incident” and that every owner of an AIS MOB should be familiar with. Potential beacon users should also understand the specific activation, test, and deactivation controls on their device, plus I have two newer beacons with special features worth examining in detail…

The author is ‘Panbo’ who is Ben Ellison.
Ellison cut his teeth as a bluewater sailor during the 1970s aboard an antique wooden sloop named Alice. After various careers as a delivery skipper, a commercial fisherman, an oil-field grunt, and a navigation/seamanship lecturer he became a tech geek while working as editor of Reed’s Almanac. Since then he has established himself as one of the best electronics writers in marine publishing. His blog Panbo is the go-to source for late-breaking news and developments in marine electronics.