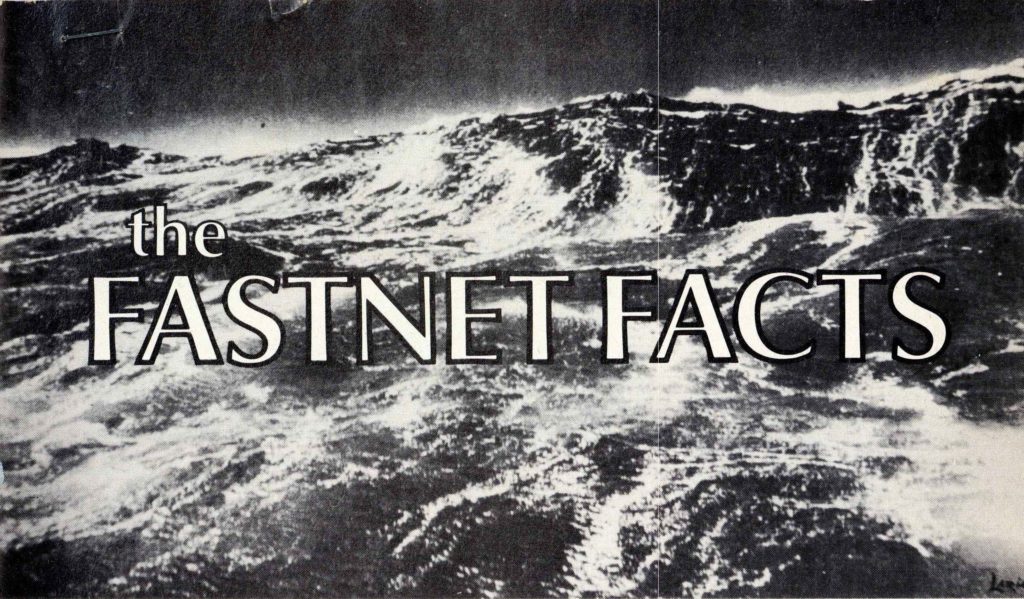 The last 2 Blogs on the 1979 “Fastnet Race Disaster” concentrated on the newspaper cuttings and touched on the South African crew who survived that ferocious storm aboard their chartered 35-footer. This info was from the personal archives of Vaughan Giles.

Today I will wrap this saga with some of the most prominent reports and findings to come out of the race, and which I feel with be educational and pertinent. Whilst these are not really bedtime reading, they are fascinating and educational – even all these years later.

The bottom line is that going to sea in a small boat is not for the feint-hearted, nor the inexperienced. And, one must at all times expect the unexpected. So vigilance is one of the key watchwords.

The other fact is in yacht racing, the sole responsibility to start a race rests with the owner/skipper. Because a race is offered does not mean that one is obliged to start.

The first piece is the comprehensive 1979 Fastnet Race Inquiry Questionnaire. It is merely a comprehensive set of questions posed in an attempt to get answers to what happened out there in that ferocious storm.

Next is the 1979 Fastnet Race enquiry official report. This is a massive document with a treasure trove of information, lesson learnt, as well as sage advice on what not to do in a similar stature storm in the future.

This too is not something one can read from cover to cover (76 pages), but can be read selectively by picking a subject heading that may be of interest or relevant to the kind of sailing you personally undertake. It is important to note that the findings here are from 235 yachts of the 303 yacht fleet. Each owner/skipper was sent 3 questionnaires and requested to complete one personally and hand the other two to senior crew to complete. As a result 669 questionnaires were returned.

So what is in this report are the facts alone.

In the February following the race Yachting Monthly magazine published a comprehensive report entitled “The Fastnet Facts”. This is highly readable and is based on the findings of the official report.

I found these words pertinent and interesting: “In terms of casualties and damage, this was the most disastrous event in the history of ocean racing. As a result the RORC and the RYA carried out a formal inquiry into the 1979 Fastnet Race and a report of their findings was published before Christmas. This document is probably one of the most important ever published to anyone who ever sails offshore, cruising or racing and its effects, if we are to learn from past lessons, should be far reaching outside the racing sphere as well as within it. We have, in preparing this article, quoted selectively from the Official Report, but our quotes cover only a fraction of what is contained in it, covering the most significant points for any seagoing yachtsmen.”

Having received a copy of the official findings I passed them on to Dave Cox, a doyen of ocean racing and a seaman who always spoke with authority on the subject, and always put into practice what he had gleaned from his sources. Being a Cruising Association of South Africa (CASA) man through-and-through, he was a leading figure in offshore safety and seamanship.

He put a brief synopsis of the key findings into a short documents and presented these to interested Durban yachties one evening.

Finally, Yachting World published a tome of information in their August 2009 issue, yes 30 years later, under the banner headline of “Fastnet 1979 – the disaster that changed sailing”.

This too is a great read crammed full of interesting information and lessons learned.

Conclusion. I will unashamedly reprint the words of Yachting World editor Andrew Bray, as he sums it all up so succinctly: “Could the Fastnet storm happen again? The answer is undoubtedly yes but even though yachts would still be overpowered and rolled by the seas it is likely, because of big improvements in crew training, safety gear, communications and search and rescue, that the human toll would be very much lower.”