“Talking Sailing” From My Archives. Women Before the Mast 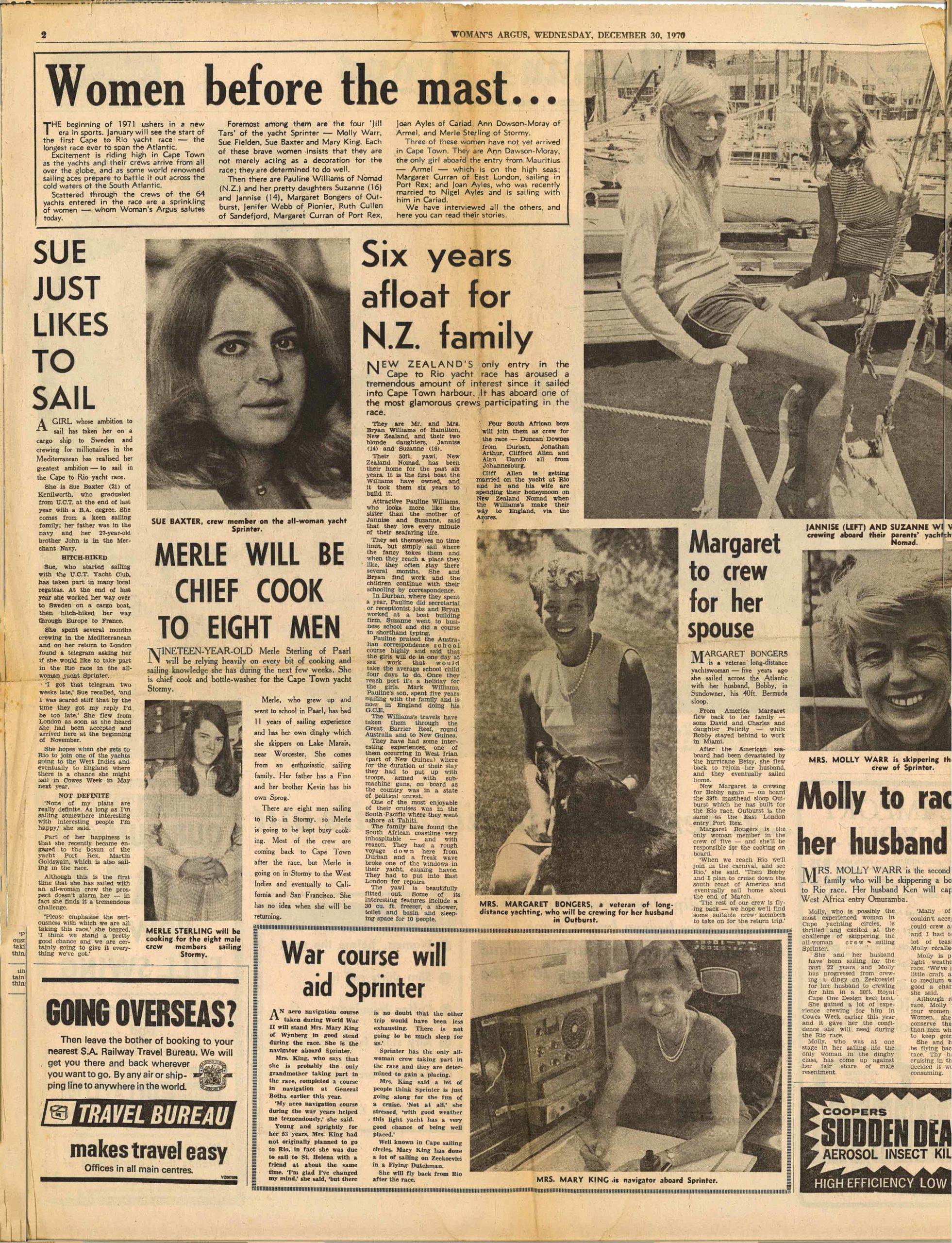 Forgive me for this contribution today as the media back in 1971 were obsessed with the women competing in the first Cape to Rio race, and even those just hanging around on boats or looking for a berth. So there are many pics of good looking women and shapely bodies, which is why I am opening with the following:

The only cuttings I have dated today are of women, so I am taking the opportunity to call back a full page spread from 30 December 1970 which is a full-on report of the women in the race, written by journalists on the Woman’s Argus, and under the banner heading of “Women Before the Mast . . . “ and introduced as follows:

“The beginning of 1971 ushers in a new era in sports. January will see the start of the first Cape to Rio yacht race – the longest race ever to span the Atlantic.

“Excitement is riding high in Cape Town as the yachts and their crews arrive from all over the globe, and as some world renowned sailing aces prepare to battle it out across the cold waters of the South Atlantic.

“Scattered through the crews of the 64 yachts entered in the race are a sprinkling of women – whom Woman’s Argus salutes today.

“Foremost among them are the four ‘Jill Tars’ of the yacht Sprinter – Molly Warr, Sue Fielden, Sue Baxter and Mary King. Each of these brave women insists that they are not merely acting as a decoration for the race; they are determined to do well.

“Then there are Pauline Williams of Nomad (N.Z.) and her pretty daughters Suzanne (16) and Jannise (14). Margaret Bongers of Outburst, Jenifer Webb of Pioneer, Ruth Cullen of Sandefjord, Margaret Curran of Port Rex, Joan Ayles of Cariad, Ann Dowson-Moray of Armel, and Merle Sterling of Stormy.

“Three of these women have not yet arrived in Cape Town. They a re Ann Dawson- Moray, ‘the only girl aboard the entry from Mauritius – Armel – which is on the high seas: Margaret Curran of East London, sailing in Port Rex; and Joan Ayles, who was recently married to Nigel Ayles and is sailing with him in Cariad.

“We have interviewed all the others, and here you can read their stories”. 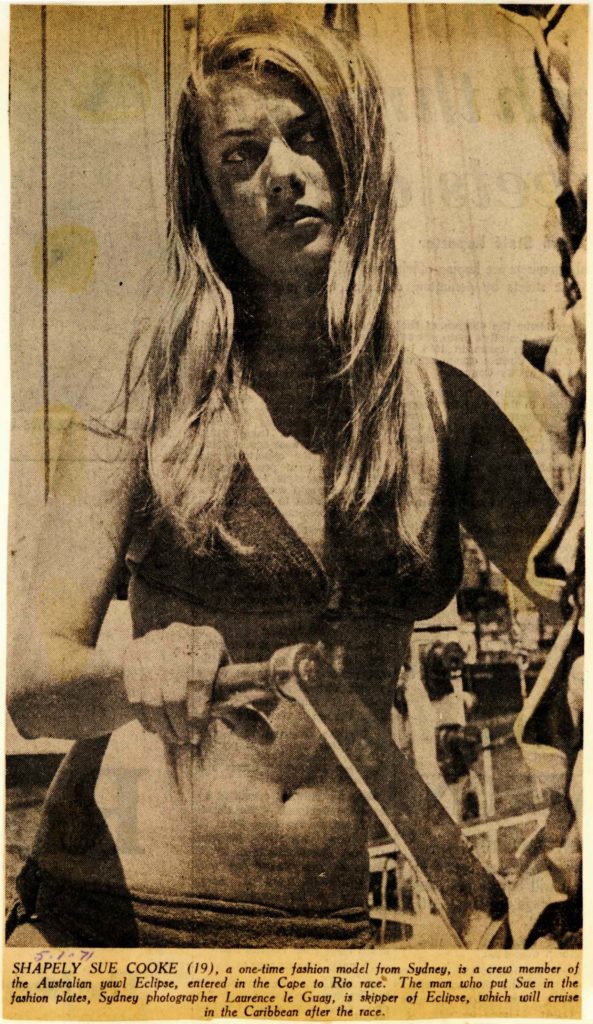 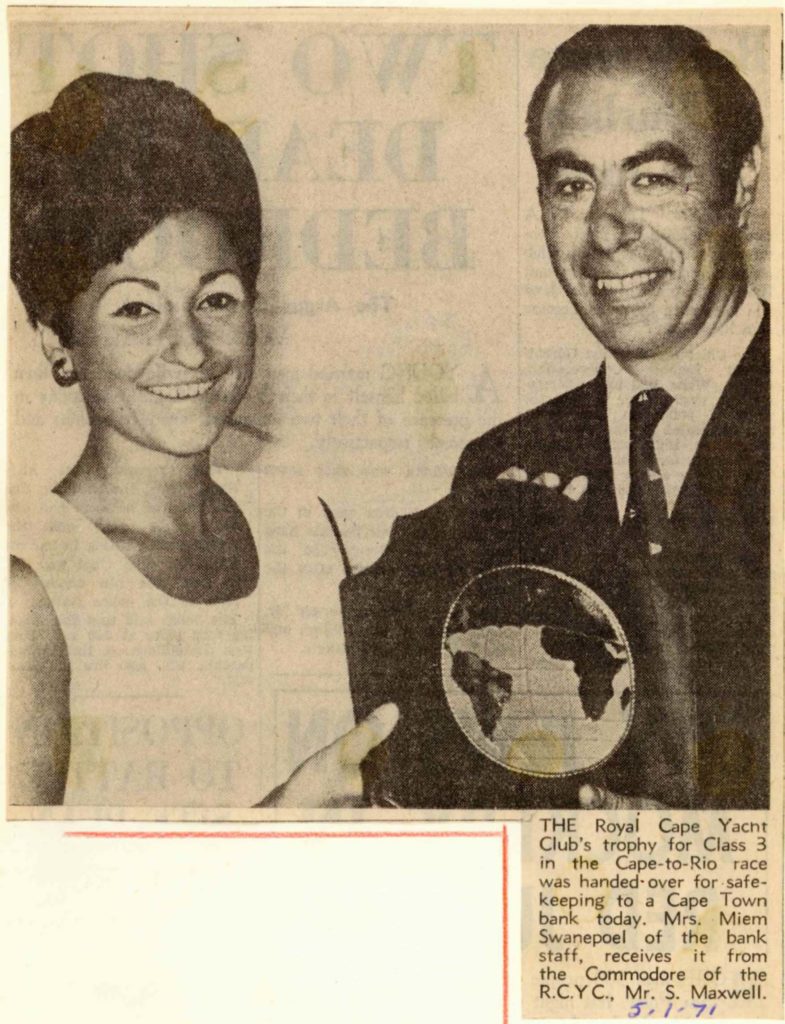