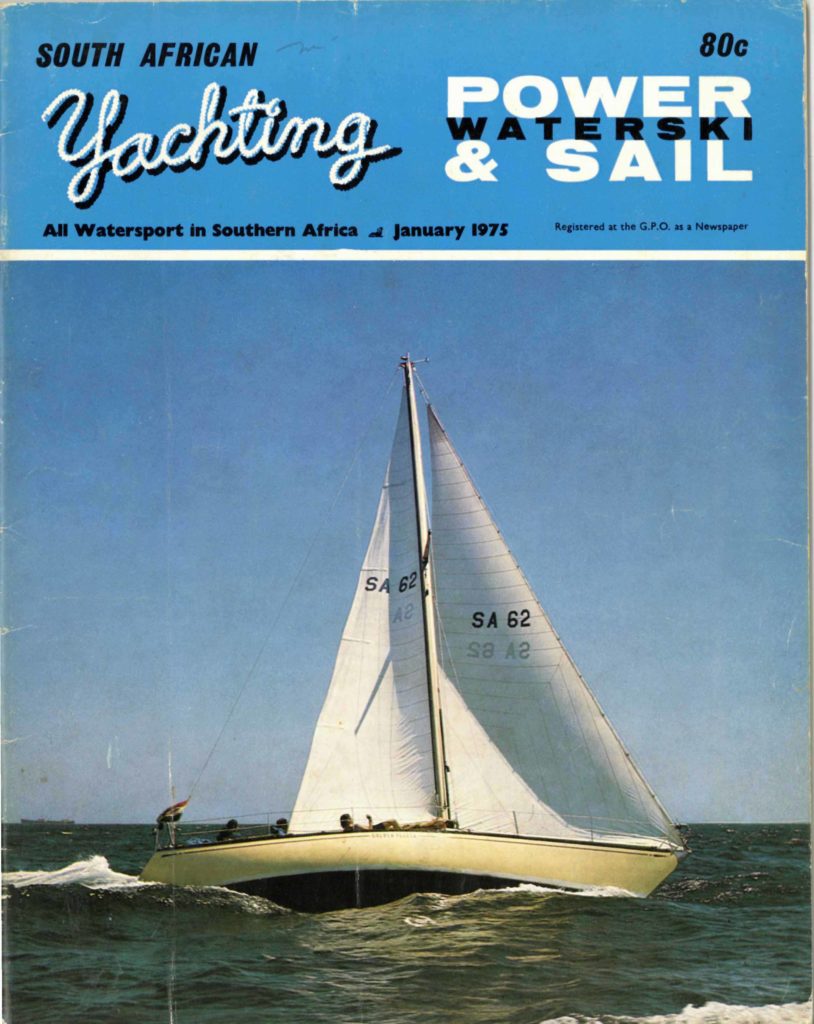 The winner of the very first Rothman’s Week was Golden Fleece skippered by Gordon Neil.

Last week I featured the very first Mainstay Week which was modelled on the highly successful Rothman’s week jointly organised and run by the Cruising Association of South Africa (CASA) and the Royal Cape Yacht Club (RCYC).

The announcement for Rothman’s Week was made in SA Yachting Magazine in June 1974 under the headline: Rothman’s Cape Sailing Week.

“Keelboat sailing in the Western Province is to get a tremendous lift following the announcement by Rothman’s that the Cape is to have a big annual sailing fiesta for offshore yachts, big and small. It will be called the Rothmans’ Sailing Week, and the date this year will be between December 16 and 21, in Table Bay. The technical organisation will come from the Cruising Association of South Africa and, of course, the Royal Cape Yacht Club.

“One of the big idea of this racing week for ocean racers is to get a good contingent down from the Transvaal, and even the Free State where keelboat sailing is getting under way on the huge Verwoerd Dam.

“Some of the up-country craft may seem mall for the Cape’s often rumbustious weather, but Fred Raas successfully completed the course in the recent Port Elizabeth East London Race in his little Mistral; and not so long ago Colin Greenacre put in two good seasons of Table Bay sailing with an even smaller Kelkiewyn – and coped with the hardest weather with out difficulty, making his mark in Division 11 racing.

“The main precaution up-country skippers should take is to beef up the rigging generally, which is too often optimistic by seagoing standards. The other point is that although Table Bay is the venue this year, False Bay could very well get it turn later.

“Anyway, pretty sizeable craft can come down by road these days. Typically, Transvaler Ludi Lochner is thinking in terms of a half- tonner which he plans to bring down every year for Rothman’s Week.

“Anyway, the programme will consist three one-day races, probably round Robben Island, and a 36-hour race from Table Bay round Seal Island in False Bay and a buoy in Fish Hoek Bay and back. All of this sailing will take into account as much as possible spectator appeal. Of course, after January, 1976. there will be television – and sailing makes one of the finest TV spectacle you could wish for, when the cameras are right out there next to the action”.

Interestingly there was absolutely no mention of any coastal clubs, giving the impression that the organisers were more interested in the Transvaal sailors than anyone else. Maybe it is fitting that a non-Cape yacht won the very first Rothman’s Week overall! To find out who you will need to read the full report.

Rothman’s Week fast became one of those “must do” regattas, as did Mainstay Week, with Rothman’s being a good event with which to close off the year.

As is always the case with these reports from the archives, there are many interesting names, faces and yachts within those pages.