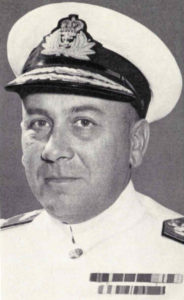 In assessing all the info I have on the very first race to Rio in 1971, it is quite clear that Vice-Admiral H H Biermann, Chief of the SA Navy, played an important role in the success of the event.

It was he who proposed a South Atlantic Race way back in August 1968, plus he was a Trustee of the South African Ocean Racing Trust (SAORT) – giving it a man of influence and stature as one of its key players. I never met the Admiral although those who knew him spoke very highly of him. Plus, he threw the weight of the SA Navy behind the event and sport as a whole.

For me though, one of most innovative fund-raising campaigns he put his name to, was an attempt by SAORT to raise R150 000 for that ‘71 Rio Race.

He did this by sending out 9999 “messages in a bottle” to influential businessmen, executives and potential donors and media. The bottles were designed to break through the “secretary barrier ” which apparently surrounds big businessmen. That message: “Help! Team up, patriots” was followed up with brochures and letters from Admiral Biermann, promoting the fund-raising drive for the Cape Town to Rio yacht race in January, 1971.

I am surprised that I have just one newspaper cutting in this regard, although the journalist who wrote about it, John Vigor, was a yachtie and crewman aboard ‘Diana K’ in that first race.

Under the headline “S.A. Yachts Challenge the World” Biermann said: “We have challenged the best in the world and we are out to beat them.

An undated newspaper cutting in 1970 showed the extent to which the SA Navy, and Admiral Biermann, were behind the race. It read:
“The South African Navy will play a leading part at the start and during the race.

“A minesweeper will be the starting ship from which the Mayor of Cape Town, Dr. J . Dommisse, will give the signal for the firing of the gun which will mark the start. There will be another two minesweepers and a frigate in attendance and these will have on board guests of the Chief of the Navy, Vice Admiral H. H. Biermann. Two of the three minesweepers will accompany the competitors for 200 miles or so.

“The fifth naval vessel will be the fleet auxiliary ‘Tafelberg’ which will act as guardship until the rendezvous with a Brazilian frigate and an oceanographic survey vessel which will take over guardship duties from the South Africans about 1 000 miles from Rio.”

Biermann also happened to be the President of the Cruising Association of South Africa (CASA), and as such became custodian of trophies presented for the race.

Biermann was also the Honorary Commissioner of the Sea Scouts of South Africa, so naturally there were Sea Scouts crewing in the race.

Who remembers the “Tavern of the Seas” at SAS Unite where members of the public and everyone interested in the race could get a good meal and drinks in a convivial atmosphere when the Naval Base was transformed. Many a good story was told in that great hall prior to the start.

And just to show how far and wide the interest of this race went, Prime Minister, Mr Vorster, members of the Cabinet, top provincial executives and mayors of leading cities in South Africa were due to watch the start with the Chief of the Navy aboard ‘SAS President Kruger’.

Admiral Biermann was a true friend of our sport who would do everything possible to spread the lore of the sea and the friendships forged across the water.