“Talking Sailing” From My Archives. 1985 Lipton Cup – UNYC the Victors

This was a hard-fought and very exciting series which went down to the wire, and which had the scribes for SA Yachting and SAILING Inland & Offshore magazine excited almost beyond words as the youngest crew ever went on to win the coveted cup!

This is how Roy Heiner opened his report in SA Yachting: “THE 1985 Lipton Cup must surely be remembered as the most exciting, competitive and nerve destroying regatta yet held on South Africa waters. Coupled with the lever compass saga and related unequalled yachting press coverage, this event can now be ranked as our own mini America’s Cup.

“The success and prestige of the regatta is mirrored in the preparation of some entries in this year’s event, most notably ‘B2G2′, and the interest of most competitors “to do it properly” next year. This is an encouraging sign for the success of the event in future years.

His description of the final race went like this: “ “Please chaps, no team racing. Let the leaders do battle by themselves” came the message from the managers. ‘B2G2′ had to beat ‘Element’ and finish in the top four . ‘Element’ had to sail ‘B2G2′ down the fleet.

“The start saw ‘B2G2′ and ‘Element’ involved in team racing circles with both boats starting badly and heading behind the fleet on port tack inshore. ‘Element’ must have been happy, leading ‘B2G2′ and behind the fleet at the start but the inshore leg paid huge dividends with ‘Element’ leading from ‘Warrior’ and ‘B2G2′ at the first mark.

“The rest of the race was too exciting for words. What was certain was that ‘Omega Heatwave’ was going to win the race. Fourteen tacks after rounding the last leeward mark Garth Hitchens stood up and clapped ‘Element’ across the line in second place, three boat lengths behind . ‘Element’ went wild, the spectators went wild, the Cup was won. A group of modest university Laser sailors did the unexpected, the unbelievable and I’m not yet sure if they fully realise what they actually achieved.”

I covered the event for SAILING Magazine, and was equally enthusiastic, opening with the following paragraphs: ‘Who would ever have believed that a bunch of young university students, who were hardly experienced in keelboat sailing, could borrow a keelboat to challenge the best that South African yachting has to offer, and then have the audacity to beat them all with such cool confidence, and competence, that almost every one of Durban’s yachtsmen found some excuse not to be at work on Friday, July 19, as they had to witness for themselves what was labelled by some as “SA’s biggest yachting upset”?

“I do not believe for one moment that skipper, Bruce Savage, or any of his crew had any inkling that they would win, but were purely sailing to give it a jolly good go.

“The Yacht was oozing talent and dinghy experience, but nowhere was there to be found much keelboat experience.

“Maybe the L26 is the overgrown dinghy it is reputed to be, and maybe it has taken this UNYC crew to prove it to us?

I was equally enthusiastic about that final race around an Olympic course, writing the following: “At this stage, only two boats could win – ‘Element’ or ‘B2G2′. To win, ‘B2G2′ had to either win the race, or beat ‘Element’ by two places. There was also a possibility of a tie, in which case the two would duel it out together the following day on a match racing course.

“There was one general recall with the fleet getting off on the second start. Only ‘Irish Mist’ was over the line at the start. ‘Element’ had a good start with ‘B2G2′ tucked away to leeward. The fleet split, some going out to sea, the others going into the beach. The inshore leg really paid well, and ‘Element’ rounded the weather mark first followed by ‘Warrior’ and ‘B2G2′.

“On the first reach, ‘B2G2′ sailed well to overhaul ‘Warrior’, and by the end of the second beat, ‘Omega Heatwave’ had climbed up from fifth to second spot.

“By this stage, ‘Element’ and ‘B2G2′ were sailing their own race covering each other closely, and watching each other’s every move. ‘Omega Heatwave’ took the lead on the run, and from here she sailed her own race to win comfortably.

“Going into the final triangle, ‘Warrior’ had sailed in between ‘Element’ and ‘B2G2′, and these positions stayed until the final beat.

“‘Element’ stayed on top of ‘B2G2′ and they continued to ignore the fleet. The tactics were superb to watch, as ‘B2G2′ was doing all she could to unnerve her opposition and break through to beat her. There were dummy tacks galore, and for the spectators the tension was almost unbearable.

“‘B2G2′ soon realised that she was tacking faster than ‘Element’, so kept throwing in many tacks to close the gap. ‘Element’, at times it appeared, left her covering late, letting ‘B2G2′ close the gap. At one stage it appeared that ‘B2G2′ was through, but this was not to be as ‘Warrior’ joined the fray near the finishing line as all three boats went for the pin end.

“Phew! It was all over. The atmosphere was electric as dozens of spectator boats had crowded the finish area to witness this incredible race – and the performance by a bunch of university students who had led the regatta overall at the end of each day’s racing, and had clinched the prized Lipton Cup on their first attempt.” 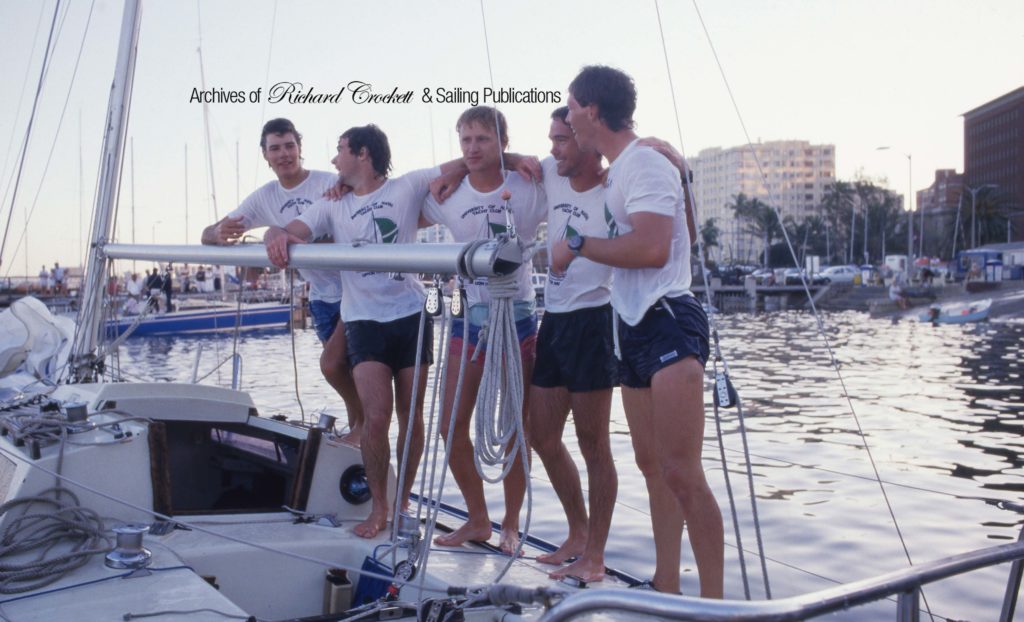