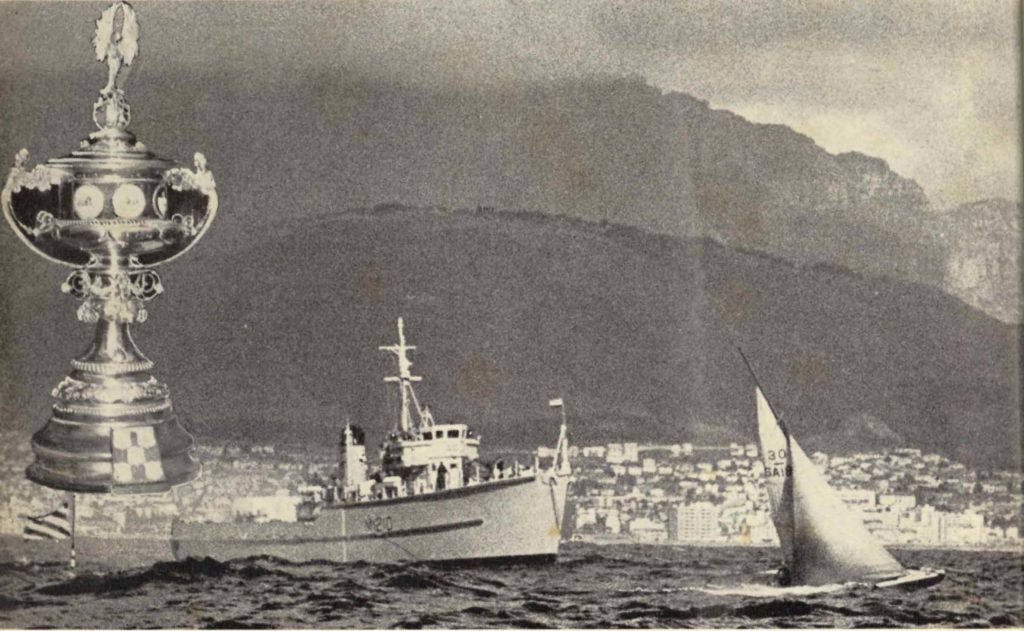 It was northerly busters, rain and cold for the 1968 Lipton Trophy series, which was won by Bobby Bongers, just back from his maiden voyage with Voortrekker, sailing Hoogie van Hoogstraten’s Trickson. Here the winner breaks across the start line first, with Table Mountain glowering in the background and SAS Kimberley (Commander Pat Patterson) once again lending welcome assistance as guard ship.

“The 1968 Lipton Challenge Contest will long be remembered by all who took part in it a one of the toughest and most challenging series of races ever sailed by Thirty Square Metre Class yachts in these or any other waters.

“The weather could not have been more unkind. The first race was abandoned due to poor visibility, strong winds and high seas. On the next day (Saturday, June 8) conditions were generally the same as to winds and seas, but visibility had improved.

“On Monday the 10th these conditions persisted and carried over to the Tuesday, and it was only on the final day of the race that the sun peeped out and allowed one day of near perfect conditions.

“It was not surprising (about the weather), therefore, that at the prize-giving dance Vice-Admiral H.H. Biermann, who watched the Tuesday race from the S.A.S. Kimberley, commented inter alia: “I have never seen a race for these yachts sailed under worse conditions – it made me proud to feel that generally the sport of yachting separates the men from the boys.” And finally: “The race brought home to me the truth of the old saying “Iron men in wooden ships”.”

What did significantly interest me, is the list of trophies presented, as some of them are no longer Lipton Cup Trophies? Is there anyone out there who may know why these trophies have slipped from the grasp of Lipton Cup competitors, and even where they may be today?

These were the trophies awarded for the 1968 challenge, and which are no longer awarded: