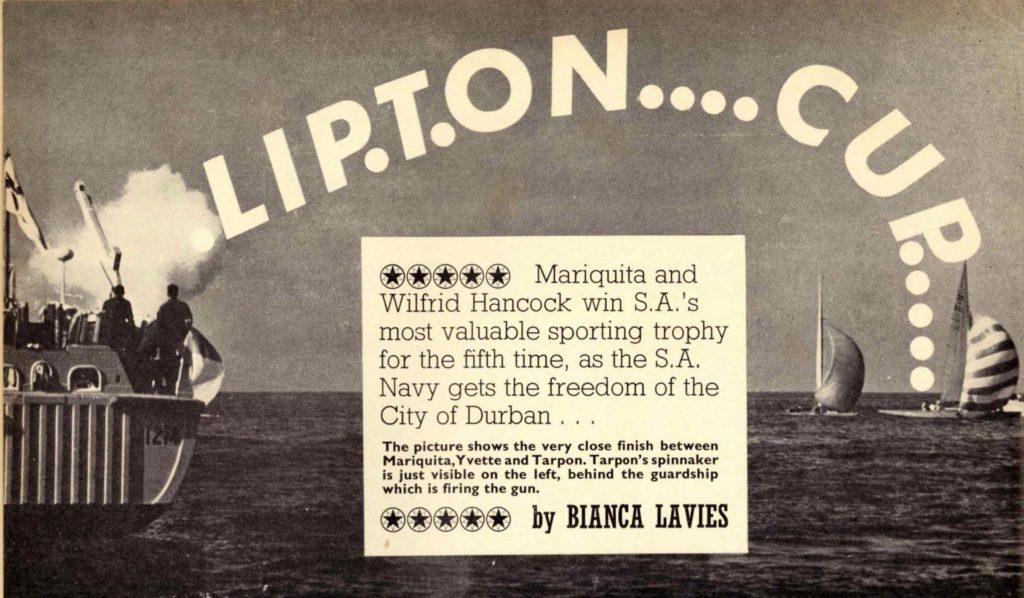 I do enjoy perusing these old reports as there are so many characters whom I know, some still around, while others have shuffled off and ended their sailing careers.

The opening paragraphs of this report were interesting as they brought in so many of the role players, characters and people who simply make the Lipton Cup happen.

“Extra glitter was lent to the 1966 Lipton Cup series as it coincided with the granting of the Freedom of the City to the local naval base ‘S.A.S. Inkonkoni’.

“But then, of course, what would any Lipton Cup be without the Navy (even though they do not let women reporters or photographers on their guardship).

“They were a greater help than ever this year. Apart from acting as guard ship and layers of marks, they also took full charge of radio communications and provided a band at the Lipton Cup Ball, held at the host club the Royal Natal Yacht Club.

“The evening before the start of the series the Lipton Cup committee met and elected their chairman, Mr. Gordon Neill, Commodore of the Royal Natal Yacht Club.

“Judges for each racing day were a also elected. Gordon Neill was judge for the first day, lvor Jamieson, of the Royal Cape Yacht Club, for the second, Joe Harris, Commodore of the Point Yacht Club, for the third, the Mayor of Durban, Dr. Vernon Shearer, for the fourth and Bob Lambert, President of the Natal Yachting Association, judged on the final day.

“After the meeting, skippers, crews and officials met and renewed friendships at a “chicken in the basket party” at the Royal Natal Yacht Club.

“There was a great feeling of anticipation of things to come.

“‘Sun Rose’, skippered by David Cox for the Point Yacht Club, had new Ted Hood sails and had been doing well, winning the recent off-shore series closely from Wilfrid Hancock.

“‘Tarpon’ (False Bay Yacht Club) had David Abromowitz on the helm, many years crewing but first time a skipper.

“Dinghy man, Bob Nuttall of Durban, was also a new Lipton Cup skipper, at the helm of ‘Avocet’ for the Zululand Yacht Club.

“Altogether 11 craft, which is the full South African Thirty Square fleet at present.

“A brilliantly sunny, windless day set the scene of the morning of the first race when skippers and crew loaded with sails, gear, course charts and “survival kits” crowded the jetty trying to get to their craft while the small ferry buzzed from boat to boat.”