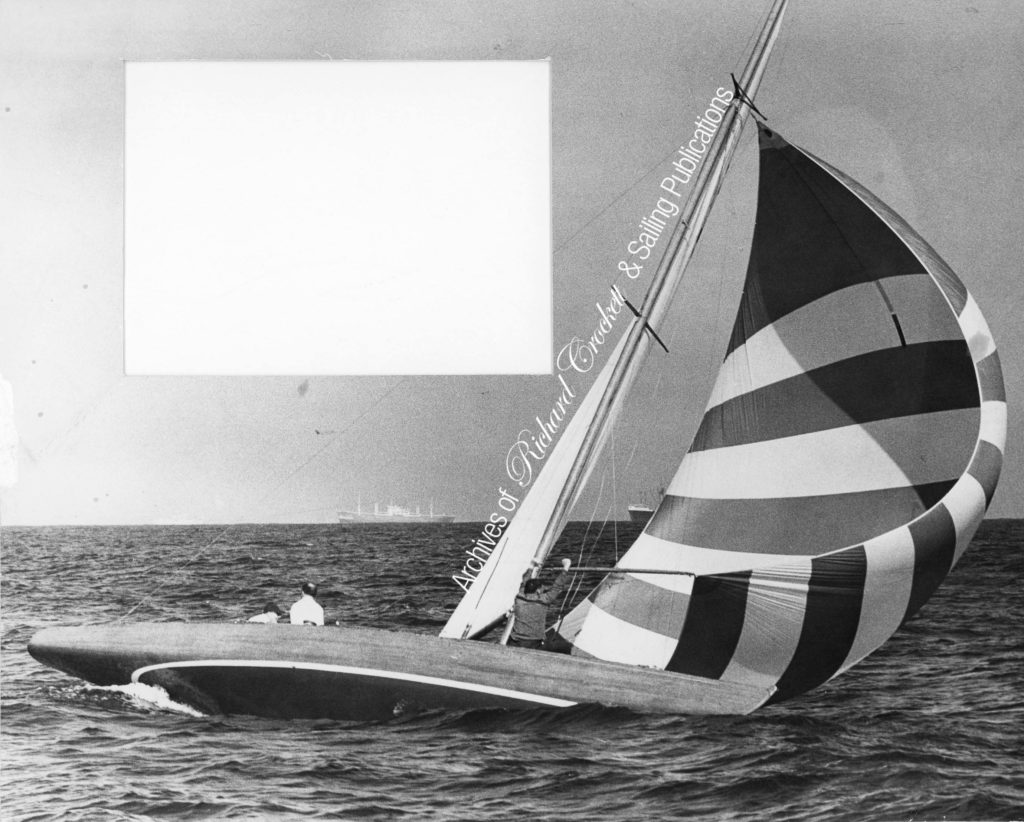 Mariquita dreamed she was sailing in an outsize maidenform – and the dream came true for, sailed by Wilfrid Hancock for the Royal Natal Yacht Club, she once again took the series.

This series was convincingly by ‘Mariquita’ with four victories in five races, and a second.

But it was the fourth race in which there was plenty of excitement. This is what the magazine report said about the race:

“The course was again leeward-windward, twice up and down 3 ½ miles each leg.

“The yachts started on a run. Soon after the start a sudden south-westerly buster came through and the strength of the wind increased from 15 m.p.h. to 28 m.p.h. in a couple of minutes.

“The yachts screamed along. Some of the skippers, who had hoisted their large spinnakers in the light wind of the start, said after the race that they could not remember ever having gone so fast and that it had been a thrilling and frightening experience.

“It was then raining heavily and visibility was so bad that spectators on the shore had no idea what was going on. The guardship as well as the rescue launch ‘Jonathan’ reported back to the operator of the board for spectators on the beach that it was impossible to give any of the boats’ positions.

The murk lifted slightly at the end of the first round when ‘Mariquita’ was leading by 1 minute 50 seconds at the mark, followed 15 seconds later by ‘Sun Rose’ and ‘Yvette’.

At this stage ‘Rapid’, sailed by Bill Boulton for the Henley Midmar Yacht Club retired. She had split her boom on the beat and her sail kept pulling out of the track. She had also broken the clip on her spinnaker sheet.

Another yacht which retired was Sea Swallow. She had her big spinnaker up after the start and it had blown to pieces. Her main halliard broke and when at the first mark her pump also broke down they decided to give it up.

The first four boats drew well ahead of the fleet on the next run. There was no change in the positions of the leading boats and ‘Mariquita’ increased her lead till she won by 2 minute 40 seconds. Second was ‘Tarpon’ and third ‘Sun Rose’.

The position on points was now such that ‘Tarpon’ had still a chance to win the cup, but only if she won the last race and ‘Mariquita’ would be placed less than fourth.