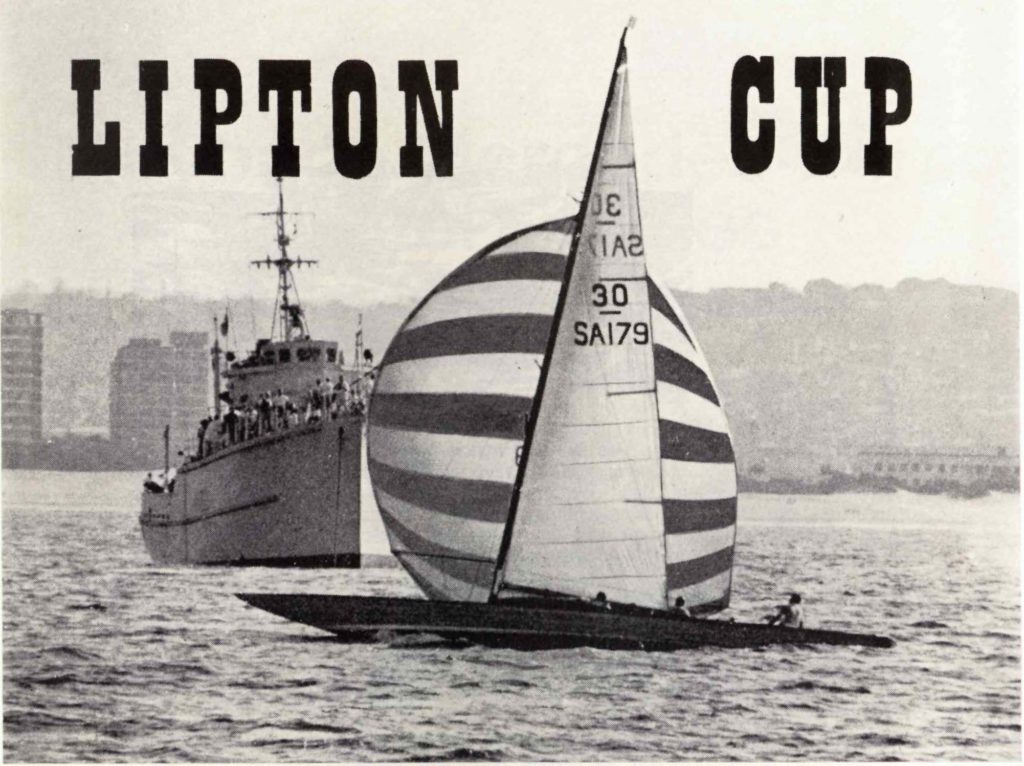 Rapid, who came second overall after a keen tussle with Mariquita, slips past the guardship SAS Port Elizabeth to win the second race. Spinnaker sets without a crease in the reaching breeze, making an intriguing foil to the slender mainsail.

This event has always been fascinating to follow as there are so many characters involved, plus a very diverse view on how best to sail the boats, and what sails to choose. More so in this 30-Square Metre era than in L26s and now the C31.

A number of factors combined to make the 1962 contest an outstanding contribution in the 52nd year of offshore racing for Sir Thomas Lipton’s trophy – and the prime of these was the fulfilled anticipation of a tremendous duel between the two superb Durban skippers – Wilfred Hancock sailing ‘Mariquita’ for the R.N.Y.C . and Noel Horsfield, winner in the two previous years, sailing ‘Rapid’ for the Henley Sailing Club.

“The third race, when a 20-knot south-wester angered the sea after two days of moderate northerlies, proved the turning-point of the series. Jamieson, no doubt anticipating a worsening of the weather, sailed well reefed and finished a bad ninth.

“Horsfield, with typical dash, went to the other extreme, clapping on a genoa and a big spinnaker.

“Hancock, with the balanced judgment that makes him so hard to beat, chose a storm jib and a medium “spinny”. On the crucial run down to the last turning mark before the gruelling beat home, ‘Mariquita’, at times sailing by the lee, was able to lay the mark, whereas the big spinnaker carried ‘Rapid’ well to leeward and she had to reach up.

“Covered relentlessly on the final beat, he could not break through, and was thus faced with the difficult target of two firsts to win the cup.

“There was minor damage in this race. ‘Trickson’ had to hand a split main, but hoisted another to sail on and earn her 101 points.”