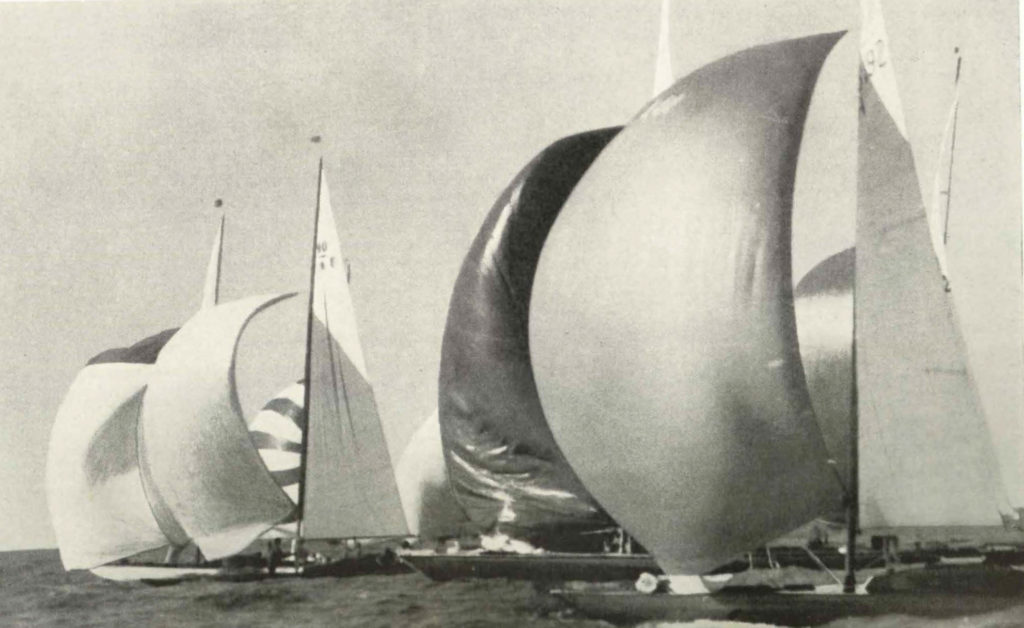 Spinnakers break out at the start of the second race. speeding boats from left to right are: Trickson; Yvette; Sunrose and Tintomara.

The headline of the report in SA Yachting magazine very succinctly tells the story that this was an upset win as it said this: “Lipton Cup Goes to Clube Naval – ‘Rapid’ at last vindicates her name, under able handling of experienced skipper Noel Horsfield.”

The opening few paragraphs also clearly indicate that Horsfield was an outsider, and went as follows: “Noel Horsfield upset all prophecies by winning the 1960 Lipton Cup series at Durban for Clube Naval by a clear 53 points from Wilfred Hancock who had held it two years running for Royal Natal. Not even the met forecast could have been more wrong!

“Obviously the ante-post betting should have been: “Two to one the field – bar the dark horse.”

“How could ‘Rapid’ – placed fifth last year, and with no special distinction with the exception of her unusually long hull – achieve this greatest triumph for Horsfield?

“The answer is – sweating hard work, allied with long yachting experience. (Horsfield has won a national dinghy title as far back as 1929 and sailed for South Africa in the Sharpie class in the Helsinki Olympic Games.)”

This was an intriguing series of five races between ten 30-Square Metre yachts.

Elegant procession as the fleet bunches before one of the inshore marks with Durban’s Berea in the distance.