Tales (of Woe) From the Doldrums 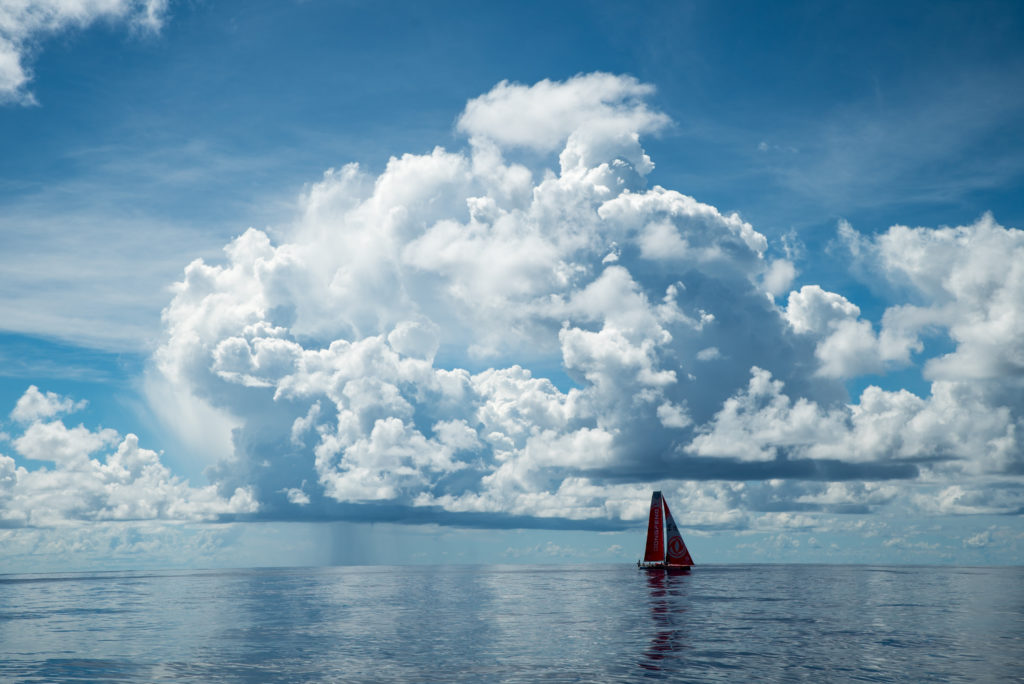 Now that the boats are moving and it’s not as stifling hot below as it is when there is no wind, several tales of woe have made their way back from the boats. It’s tough out there and certainly not for the feint hearted.

Dee Caffari on Turn the Tide on Plastic
All it takes is just one cloud – and what a cloud it was.

The radar showed a pretty intense cell of activity, we knew it would contain some good rain and we had been surrounded by lightning for most of the night but when this cell came overhead it was insane.

Huge strikes of lightning and a massive clap of thunder literally overhead in torrential rain. The wind was going all over the place with all sorts of speeds and at the moment of the big hit, the whole boat tripped. Everything turned off and had to be re-started. At that moment when everything is in chaos, losing the boat systems was not what was needed. It certainly woke any sleepy people from their slumber!

Sadly as a result of this crazy cloud action, we went from heroes to zeroes in the rankings. So we have some work to do. They are still in sight but sadly we are not controlling them anymore.

We need to fight our way back and there is opportunity to do that as we will have more of this activity and then there is also the doldrum active cells currently sat at the equator before we get any steady trustworthy wind. It is a long race and a lot of sailing still to be done.

Bouwe Bekking on Brunel
The pain of seeing your rivals get away still stings even on your eighth Volvo Ocean Race. Just ask Brunel skipper Bouwe, who sent in this candid and honest blog in the small hours of the morning… 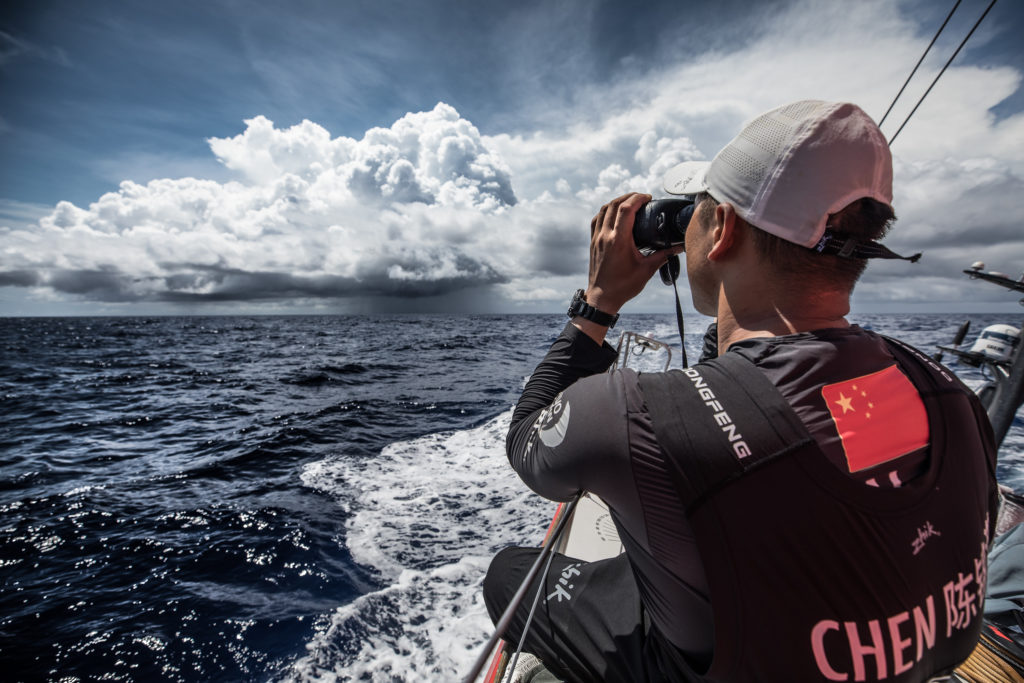 Very mixed feelings right now on Team Brunel. We had an excellent day yesterday and we were well in sight of the others, but then we lost out big in a thunderstorm, who brought us some action. I got flipped out of my bunk as all of a sudden the breeze changed 90 degrees, The big code zero was strapped in as we were sailing upwind , so that was pushed against the rig and as well the mainsail was forced against the runner.

Probably we heeled around 45 degrees the wrong way as the keel was also on the wrong side. It took about 1 minute to get the code0 furled and getting the new runner on. Then Kyle , who was driving had to find the orientation for the new course and off we were again. A text book recovery!

Shortly after it started pouring down and most took a shower. I had put my foulies on, I know after the first good feeling of having a shower, you get freezing cold, so saved myself from that, hopefully no colds showing up in few days.

Mapfre was only 2 miles to leeward, we could see their torches shining on the sails and we both sailed around 15 knots of boatspeed, as the wind had come aft .

Then all of a sudden we ran out of breeze, while they kept going full pace. It is a dreadful feeling, you quickly see their masthead light getting smaller and smaller and after 30 minutes they disappeared out of sight On AIS we could still see them, but we knew we would lose out badly, as the fickle breeze what we had started coming straight from behind, meaning we were well off course , while Mapfre were doing course.

For sure another painful position report will follow, but the fighting spirit is there and still a very, very long way to go: I asked Abby to start looking into our food situation, as we can be way longer out than predicted, she doesn’t seem to be worried, so that is good news.

Amory Ross – Vestas
This Doldrums passage has been the ‘worst ever’ according to Volvo Ocean Race veteran Tony Mutter. Vestas 11th Hour Racing OBR Amory Ross takes up the story in his blog…

It’s hard to describe the last 48 hours without sounding incredibly sour. They have been well and truly difficult and with a quick survey of the onboard vets, this Doldrums passage has been all-time kind of tough. Tony, who I believe has the most miles of anyone onboard, claimed it “goes down as the worst ever.”

Even in writing this I’m precariously dripping sweat all over the keyboard. The air is unbearably hot (37-40 degrees Celsius) and unusually stable, meaning there are very few storm clouds for momentary rain-refreshment and the occasional blast of cool, upper altitude winds. Nothing. There is no wind. Air just hangs there like a wet towel, impervious to our repeated prayers. For two days we’ve drifted in a glassy domain of mid-latitude suffrage where this planet literally cooks humans alive.

Fortunately, the nights make a good effort to recompense. Temps are still high but without the beating rays of sun to fry the skin it’s actually (relatively) pleasant. And the stars have been unreal. I don’t remember seeing so many stars in the sky, ever, the brightest ones reflecting on the mirror-like ocean below.

Adding to the displeasure, our eight mile lead this morning was all but chewed away throughout the day and everyone is now evenly lined up east to west. Frustrating, but as SiFi reminds us – “there is an element of luck to this game and it’s important to keep that in perspective. You fight for every inch and it can be taken away from you so quickly by a new cloud we have no control over.” So the constant tug of war continues… Sometimes it’s our turn, sometimes it’s their turn, and here’s to hoping that when the veil on this aquatic desert lifts to the north it’s our turn that’s the last! 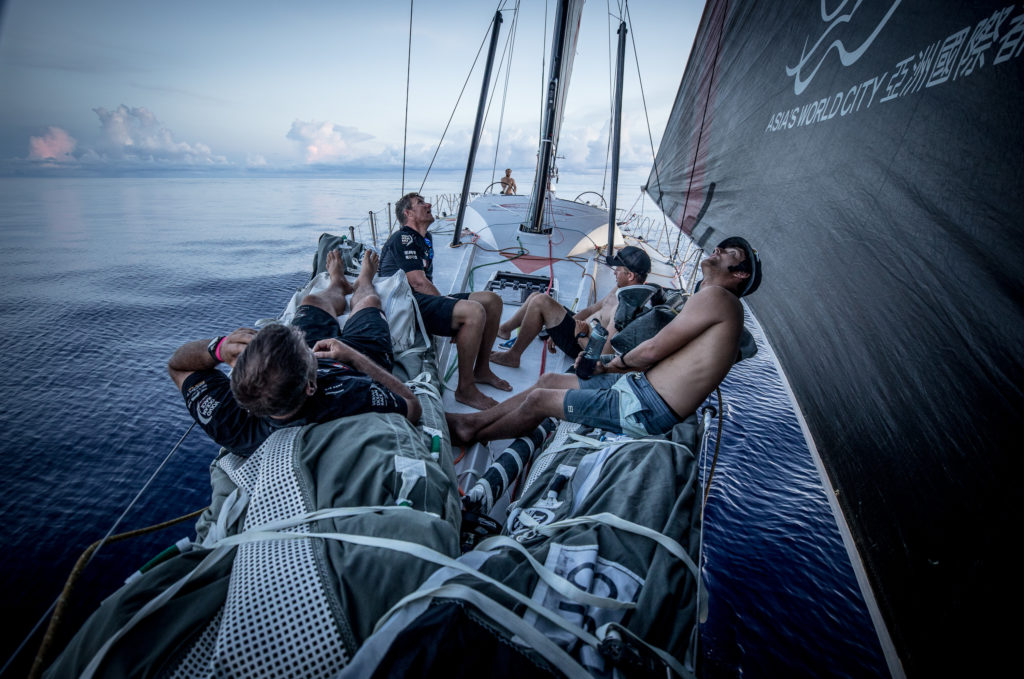 Crew up on the bow to keep the weight forward on board Sun Hung Kai/Scallywag.
Photo by Konrad Frost/Volvo Ocean Race

6 hours of heaven and 6 hours of hell. AT 1300 yesterday we had pushed back up into the fleet, a restart. Brunel gybed east to get towards us (gybing away from Hong Kong) and reposisitioned just over 2nm in front and below our line. AIS became populated on and off with the rest of the fleet doing various speeds from zero to 15 KT in various directions as cloud activity rapidly grew. It was going to be a busy night.

In the space of half an hour Brunel had hooked on to a cloud and were suddenly 7nm north of us, but the leaders were still wallowing and we were slowly going around the westerly side of them.

As fork lightning appeared in front us and sheet lighting to leeward, the sky was lit up to see the clouds and individual boats were trying to pick their way through.

The clouds were developing rapidly and we got caught in a shower sandwich (probably more like a sh*t sandwich). At first we made good progress north skirting along the edge of the cloud to our west and then we engulfed surrounded by rain pirouetting with the cloud- struggling to make progress out of it.

It took over an hour for us to find our way out where a lot of the time we were hardly moving and surprisingly didn’t get struck by lightning.

The cloud of doom had done its job and all those miles we had made up
slipped away.

We are now in the unfortunate position where the rich will get richer as they always lead into new pressure. However there is 3000 odd miles of ground to cover and only 3-4 hours in the routings, which still means opportunity and Scallywags will be sure to take them. 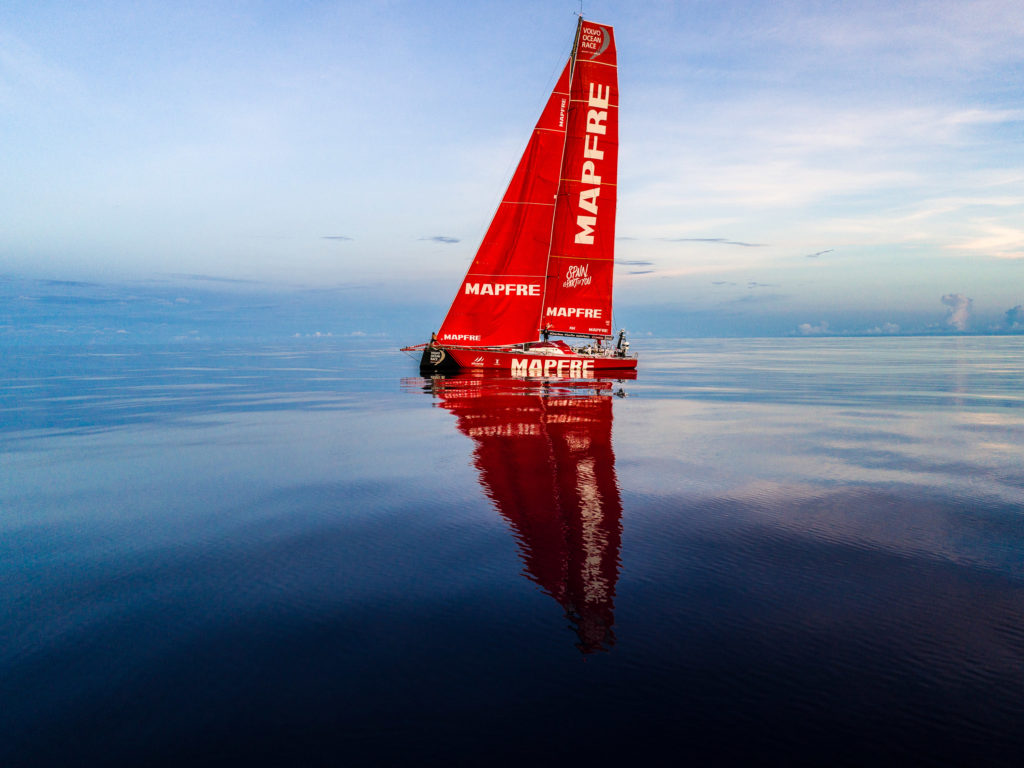 MAPFRE navigator Joan Vila
There was a lot of activity on board yesterday and last night, in the best doldrum conditions, with well-developed showers and thunderstorms, requiring constant sail changes and manoeuvring. At one stage yesterday afternoon we could see the whole fleet, parked together in light winds. It took a few doldrum showers and a thunderstorm to split the fleet apart again overnight in all different directions. We are now only in visual sight of Dongfeng and Turn The Tide on Plastic, while this morning we could also see Vestas and Akzo Nobel.

After a busy night, weather conditions are much more relaxed now, with slightly steadier winds and only small cumulus clouds that are not producing showers, allowing to steer course with somewhat steadier gentle E winds, and a time to catch up on rest for all of us. Otherwise all is well on MAPFRE. We had a few dolphin visits around the yacht, and also passed by a whale.