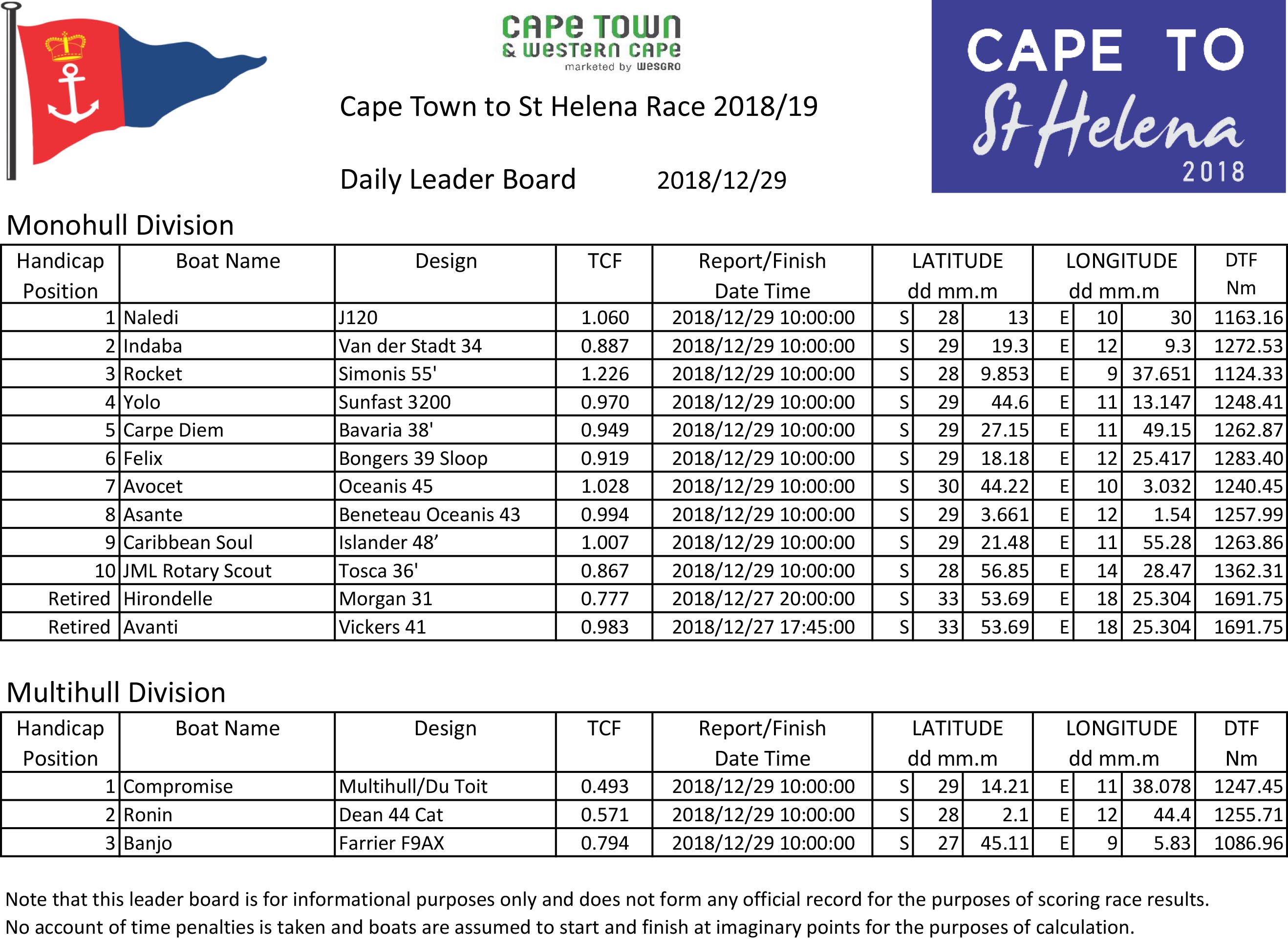 The race is progressing well now as the boats appear to have picked up consistent winds and ‘lifting their skirts’ as they fly towards the finish and that all important milestone of “less that 1000nm to go”.

Heading the fleet in terms of the distance to the finish is the trimaran ‘Banjo’, followed by ‘Rocket’ and ‘Naledi’. These three are comfortably ahead of the rest, with ‘Naledi’ appearing to be sailed exceptionally well as she heads the fleet on handicap.

Behind them is a large bunch of 6 boats with ‘Indaba’ in that mix as the 2nd boat on handicap, and ‘Yolo’ as the 4th placed boat on handicap. ‘Yolo’ is the only boat being sailed singlehanded with Dale Kushner appearing to be doing a great job of keeping in touch on handicap against the fully crewed boats.

Here is some news from the boats:

‘Banjo’ reports that the sea state is a lot calmer, and the wind speed about 20 knots.

She reported that last night was hectic as the sea state was very rough with a cross swell and wind gusting 35 knots. As a result they went from a big kite to a small one, then a code 0, 1 reef in the mainsail, then 2 and later 3 reefs as well as reefed jib. As the wind continued they dropped the mainsail and sailed on their jib alone. This throttling back was to keep the boat and crew safe.

Their skipper also reported that this morning they have tried a few different sail plans in an attempt to get the best from the boat in the prevailing conditions, and that crew members Brad and Sarel are getting very grumpy about all the changes!.

‘Compromise’. She too reported another bumpy ride last night and winds gusting over 31 knots. They were also sailing with 2 reefs in main, a “handkerchief” jib, and still doing 15 knots down the waves.

Their report also said that they sacrificed a pack of Karoo chops to Neptune – aided and abetted by a plus 30 knot squall! More importantly for them they are fishing again as the conditions have calmed.

Fishing is not conducive to fast sailing so their competitors will be delighted to hear this.

‘Caribbean Soul’. Her Crew have reported that “we lost the plot a bit, but are now back on track. Had some issues with the mainsheet, but all sorted now. Sea still lumpy, but settling down. Weather and wind make for nice sailing so we are having fun. One crew member was down with the flu, but back on watch. I feel as though I have been in the gym for 3 days so a bit sore. Say hi to all and have a great weekend”.

‘Carpe Diem’ says that all is well on board, the sun is shining and it’s a glorious day. More importantly “the children are happy”.

‘Naledi’. Felix reported as follows: “Nice sailing under spinnaker though a bit lonely as we cannot see anyone else. All the best.” No doubt the few words in the report mean that the crew is sailing hard to keep their top-of-the-leaderboard position on handicap.

‘Ronin’ reported a rather bumpy night and that they were pooped once, but that all is good otherwise.

‘Asante’ say they are going nicely, but as their watermaker is not working they are going on rations. Despite that setback her crew are still in good spirits.

‘Yolo’. Her skipper Dale Kushner is never a man with many words, so simply says “All well on board.” With no one else to write the report we simply have to be satisfied with those few words.