South Africa’s ‘My Side’ Wins Slow Race to Shenzhen 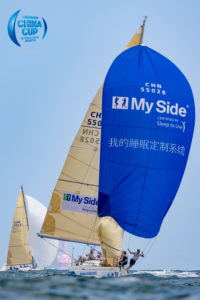 Ellian Perch’s South African crew on ‘My Side’.

The 11th edition of the China Cup International Regatta opened with the passage race from Hong Kong to Shenzhen. With around 1,500 sailors from 40 different nations and regions, this event is more international than ever and the competition tougher by the year.

In the hotly contested one-design fleet of Beneteau 40.7s, Ellian Perch’s crew on ‘My Side’ Team from South Africa threw down the gauntlet by winning their fleet. Yiihua Pocket Emirates Team New Zealand finished second, the Kiwis desperate to win this event at their third attempt. Among the crew are two of the winning America’s Cup crew from earlier this year, Josh Junior and Andy Maloney.

In terms of line honours, Frank Pong’s 75-footer Jelik led the way in a race that saw very light winds from start to finish. Principal race officer Simon James had taken the precaution of putting in two gates on the race course that could also serve as early finish lines if the fleet failed to make it in time to Daya Bay. It was just as well James instigated this fall-back, as most of the fleet only made it to the first gate, so light was the breeze, rarely getting over 5 knots.