Something Very Special is About to Happen in RSA Sailing 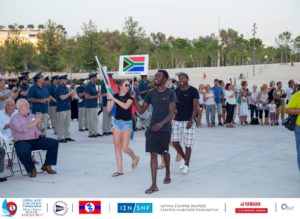 Opening Ceremony of the 420 European Champs 2017. Hiding at the back is Elsje Dijkstra. 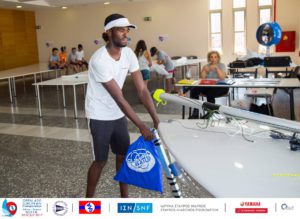 RSA have two teams in the 420 European Championships which begin today in Athens.

But this is no ordinary team – this is a mouth-watering mixed team of both race and gender – all exciting up-and-coming born and bred young RSA sailors.

Stepping back into a 420 after many years campaigning a 470 at the London 2012 and Rio 2016 Olympic Games, is Asenathi Jim who has partnered with Elsje Dijkstra as crew.

His crew at the recent 470 Worlds, Sibu Sizatu, has teamed up with Michaela Robinson who will helm the boat. The aim of these partnerships is to accelerate the transfer of knowledge between the hands of experience and the raw talent of youth, which is likely to prove potent on the leader-board standings.

This has been masterminded by Roger Hudson of the RaceAhead Foundation. Hudson is a double Olympian in the 470 class. “This is a huge challenge for Asenathi and Sibu to try to get results while at the same time mentoring the girls with care. The girls are obviously very inexperienced, but the boys know that their key role is to nurture, inspire and grow them as much as possible – something they are absolutely relishing” said Hudson. “Asenathi and Sibu now also have a chance to give something back to the sport”.

These 4 talented RSA sailors will be competing in the Open Division.

They have a possible 12 races ahead of them, as long as they sail well enough in the first 6 races to qualify for the finals over 3 days.

NOTE. The RaceAhead Foundation is a Non-Profit Organisation registered in South Africa.