I watched a terrific movie last night. It was the kind of movie that would have changed the trajectory of my life had my life not already been on a similar trajectory. The movie was Coyote and it’s the true story of the American sailor Mike Plant and his ambition to win the Vendée Globe. 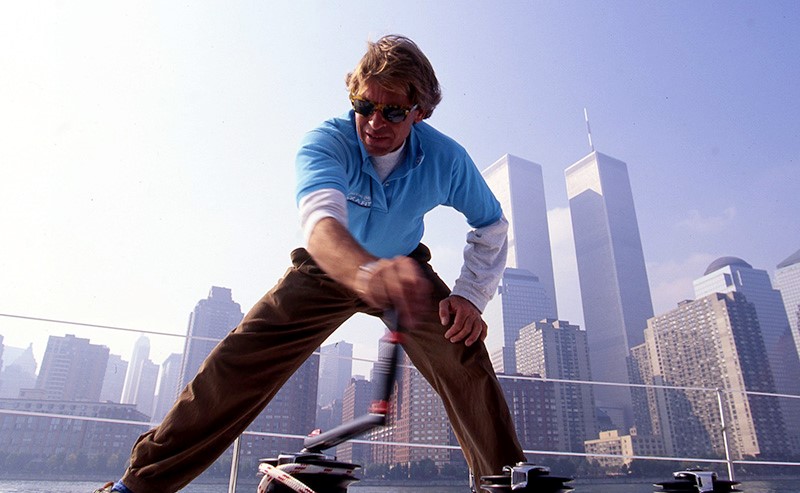 I met Mike many years ago. I was introduced to him by my friend Roger Martin, a fellow South African living in Rhode Island. Mike had gone to Roger looking for an innovative designer to design him a boat for the 1986/87 BOC Challenge, a solo around-the-world race that was due to start from Newport the following year. Mike was hard at work in a shed building his boat with his bare hands and not much money; well more to the point, no money. He had boyish good looks and a bit of a manic look in his eyes. Watching the movie last night I came to the realization that the look was not manic; it was instead burning ambition.

This is not only a movie for sailors, indeed my non-sailor wife loved it and the message that it conveyed. It was a simple message. If you have a dream and you work hard at it your dreams, no matter how unrealistic and ambitious they may be, can come true. Mike had barely sailed offshore, he had no solo sailing experience and he had very little money yet it was his dream to build a 50-foot yacht, race it single-handed around the world and better yet, he was planning on beating all the top French sailors. And you know what, he did. He built the boat with a lot of in-kind sponsorship, a lot of help from friends and family and with grit and determination he launched it in time to complete his qualifying passage sailing from Rhode Island to the Azores islands. What happened in the Azores was an unexpected twist in the story best told in another blog. Mike made it to the start of the BOC Challenge by the skin of his teeth and went on to with the Class 2 division of the race beating out a very competitive field of experienced sailors. 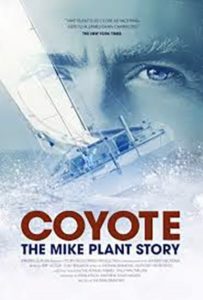 His next challenge was the Vendée Globe and he (again on nothing more than goodwill and grit) managed to make the start of the race on a brand new 60-foot boat named Duracell for the principal sponsor. It was during this race that Mike’s true character was revealed. During a really bad Southern Ocean storm Mike made a decision to take shelter in an inlet on Campbell Island, a tiny island off the south coast of New Zealand. Unfortunately his anchor would not hold and he was dragging toward the rocks. Some Kiwi Meteorologists stationed on the island came to his rescue and in doing so touched the boat which meant automatic disqualification from the race. The Kiwis told Mike that they would never, ever tell anyone about the incident and insisted that he should continue but Mike replied “I will,” meaning that he would not be able to live with the lie and he called into Race HQ to disqualify himself. That single incident revealed his true character. He ended up sailing back to France and received a hero’s welcome in Les Sables-d’Olonne where the event was based.

I wonder how many among us would have admitted to the incident especially after all the hard work that had gone into getting that far? 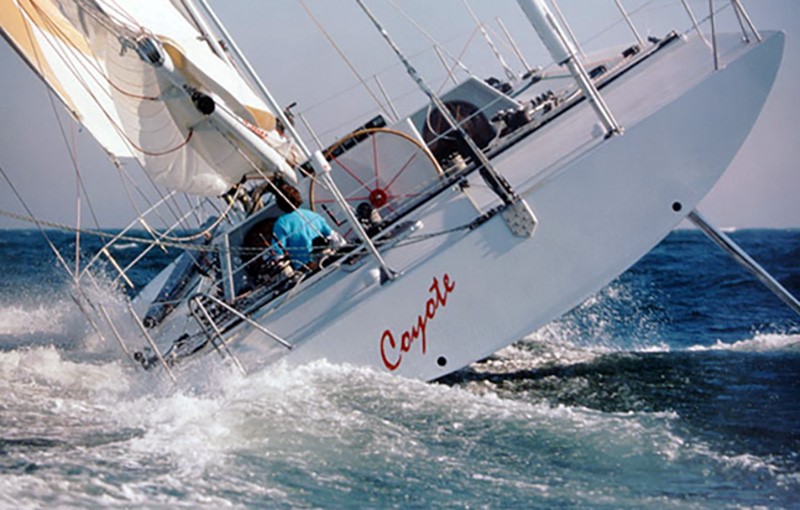 The movie has some great sailing footage, but the best parts were the interviews with many who knew Mike including Roger Martin, the photographer Billy Black, Ken Read who at the time was working for North Sails and Herb McCormick who was part of the media team for the BOC and co-author of an excellent book about the first BOC Race. They, along with Mike’s girlfriend and family give an intimate look into the challenges that Mike faced and how he dealt with them to become the greatest American solo sailor of his generation. Despite his disqualification from the Vendée Globe Mike was determined to return and to not only lap the planet, but to beat the French at their own game. He built a brand new 60-foot yacht and named it Coyote. In the movie Mike’s girlfriend explains the reason behind the name. “Mike was very spiritual,” she said. “Coyote is indicative of one that travels alone and eats sparingly.” Perfect.

There is much speculation about what happened in the last chapter of Mike’s life. He was on his way across the Atlantic heading for France and the start of the Vendée Globe when the bulb of the keel snapped off, the boat capsized and Mike was lost at sea. Much of the speculation centres around a grounding in the Chesapeake before Mike left to sail to France. When the boat was being towed off the sandbank they think that the bulb was embedded in the sand and the hull was twisted weakening the joint between bulb and fin. It’s likely that was what caused the bulb to break loose but sometimes too much speculation is not a good thing. The bulb broke off, the boat must have capsized instantly and Mike was lost. That’s the story.

Mike Plant’s legacy was already established in sailing but this movie established his legacy in American culture. He was an icon. Indeed the New York Time wrote, “Mike Plant is as close as yachting gets to a James Dean Character.” I think that I will let that be the last word other than to urge you to watch it.

You can stream it through various outlets including: