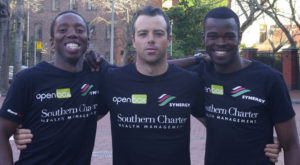 Asenathi Jim and Roger Hudson were a formidable combination on the world circuit for several years, including 2 Olympic Games.

Now Roger Hudson, the driving force of that campaign under the RaceAhead banner, has stepped aside and brought Sibu Sizatu into the on-water team as he moves into the coaching role. Asenathi and Sibu are both 25 years old, with Asenathi having already attended 2 Olympic Games regattas.

The 40 World Championships being sailed from the Nautical Club of Thessaloniki in Greece from 3 – 16 July, is the first major regatta in which these two will be sailing together.

Roger Hudson says that his direct mission in Greece is to achieve the best possible result with the team of Asenathi and Sibu.

“Sibu has been training with RaceAhead since 2012. He is a versatile sailor who has good skills in both positions on the 470, helming and crewing. We decided in January of this year to push his development specifically for the crewing role at this year’s world championship in Greece. I spent a lot of time with him on the boat in training between January and April, directly coaching him in the techniques and skills of 470 crewing” said Hudson.

“At this 2017 Worlds Asenathi and Sibu have the potential for a good result, but wherever they finish, they will grow as sailors through this experience. Sibu will gain top quality international racing experience and Asenathi will benefit from taking on more tactical responsibility and leadership within the new partnership. There will be around 80 teams at the event. A top 40 finish would be an acceptable result, a top 20 finish would be very satisfying for us and a top 10 would be outstanding and would probably have a big impact on South Africa’s sailing prospects at Tokyo 2020. I’m here with the guys to continue doing all I can to support them on and off the water. We’ve walked a long road together and all three of us are really looking forward to this event” he said.