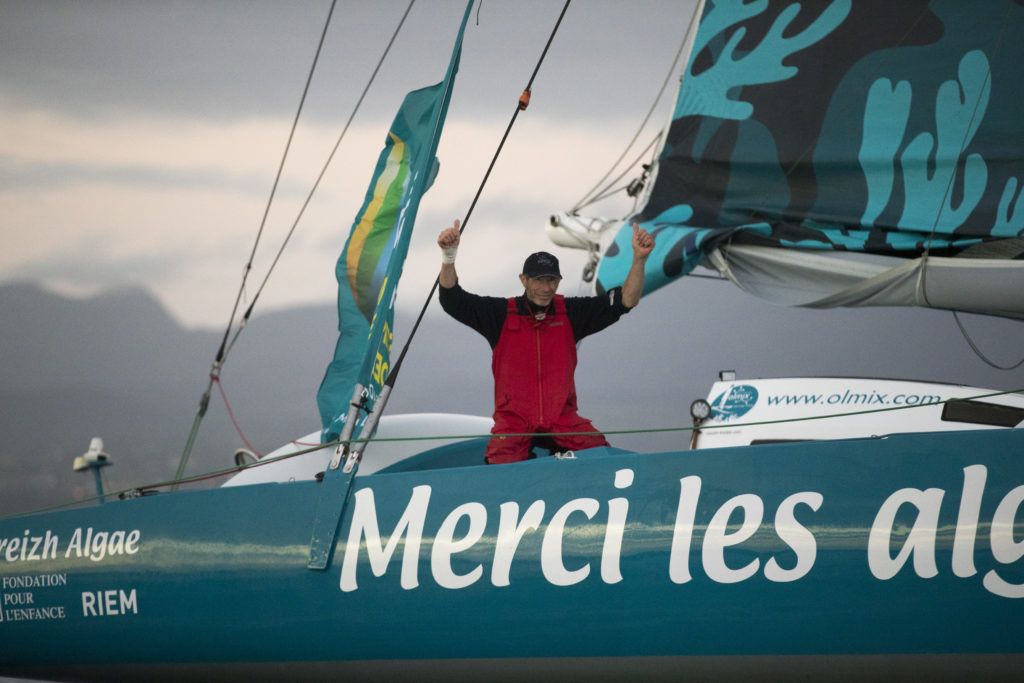 Pierre Antoine and Yoann Richomme are the convincing winners in Rhum Multis and Class 40s respectively.

And still in the race and doing remarkably well after a really torrid first week at sea is Donald Alexander who is in 23rd place in Class 40, and who has his sights firmly set on finishing the race.

In snippets from ‘Power of One’ Alexander explained that after pumping 400 litres of water from a leeward ballast tank, his trusty steed has now picked up her skirts and is beginning to fly again as he has done 249nm in the past 24 hours.

Last evening he said: “Perfect conditions for spinnaker, but I resisted the urge as there is simply too much squall activity and my resources are down – especially if there’s drama. Think I’m just going to have a cuppa (tea) some calorie snacks and sleep.”

Early this morning came this: “Doing well, but hard work without the autopilot. Huge progress though. I unfurled the gennicker at 04h30 and I’ve been flying every since at 10 -18 knots boat speed”.

In the amateur Rhum Multi class the outright leader since the start off Saint Malo in Brittany on November 4 and the convincing winner 16 days later was the veteran French sailor Pierre Antoine on his trusty wooden trimaran, ‘Olmix’. 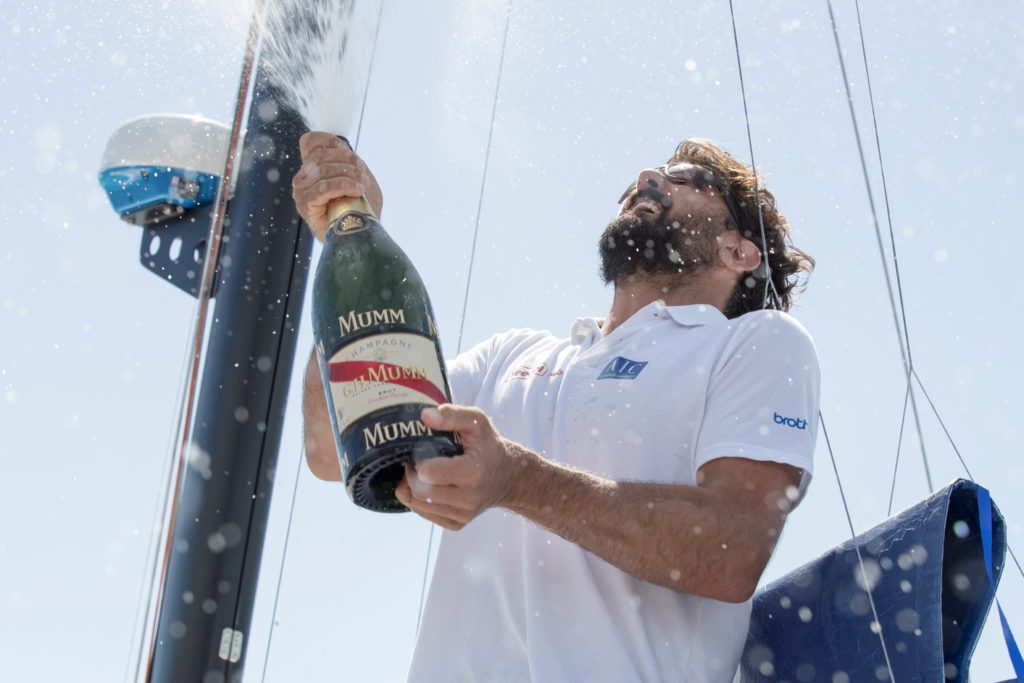 Yoann Richomme finished in first in the Class 40 after 16 days, three hours and 22 minutes at sea.
pic by Alexis Courcoux

In Class40s the victor, who was again the dominant competitor, but this time in a field of 53 boats, is Antoine’s fellow French skipper Yoann Richomme on board ‘Veedol-AIC’. Richomme finished well ahead of Aymeric Chapellier on ‘Aina Enfance et Avenir’ and Britain’s Phil Sharp on ‘Imerys Clean Energy’ were locked into their own private battle for second place, which ultimately went to Chapellier.

Pierre Antoine is a remarkable sailor who at the age of 56 was taking on his fourth Route du Rhum race. He won his class in 2006 but had to abandon the race four years ago when his yacht was hit by a violent lightening bolt, requiring an extensive programme of repairs and re-building.

This time ‘Olmix’ which was built back in 1991 and is a boat that Antoine knows inside out, had no such dramas as her skipper sailed a textbook race through early storms and then into the trade winds. He stopped only briefly to pick up the Multi50 skipper Lalou Roucayrol from his upturned trimaran, ‘Arkema’, about 1,000 miles east of Guadeloupe.

Antoine’s time was 15 days, 21 hours and 15 minutes which sets a new record for the Rhum Multi class. “It is always special to be at the start of this race, fantastic – it is a step out of the comfort zone to do things that we don’t usually do, and so to win it is great, and a conclusive win is so much the better,” said Antoine as the celebrations began ashore.

When Richomme arrived after 16 days, three hours and 22 minutes at sea on board his Class40 yacht, ‘Veedol-AIC’, he had taken more than half a day off the previous best time for these exciting monohulls. The Frenchman who trained as a naval architect in Southampton and is based in Lorient was overjoyed to have won so convincingly in a competitive fleet.

This has been a textbook race for Richomme and indeed a textbook campaign as he built a new boat, put it through its paces – including dealing with a dismasting early on – and then produced it on the racecourse to devastating effect. ‘Veedol-AIC’ was faster than the others as he led the Class40 fleet from day two onwards, having initially sailed a conservative line close to the most direct route – the rhumb line. But he then made a move to the west which allowed him to sail a faster angle earlier than his rivals. He demonstrated great confidence in his boat, but showed too a Figaro sailor’s feel for high tempo without going into the red.

As the race progressed the speed and power of his new boat became apparent as in downwind conditions it was between one and two knots quicker than those of Sharp and Chapellier.

He was asked whether this had been the prefect ocean race. The 35-year-old who hopes to move onto the Vendee Globe in 2020 did not disagree even if he lost part of his bowsprit as ‘Veedol-AIC’ thundered down a wave. “It was practically perfect,” he said. “I did the weather strategy perfectly; it played out like we planned. I accelerated from the front as we left Brittany and then after that I just sailed safe but hard. I was always safe but the boat was always safe. I lost two metres off the bowsprit but otherwise the boat has been 100% reliable. I went down a big wave and that was it.” 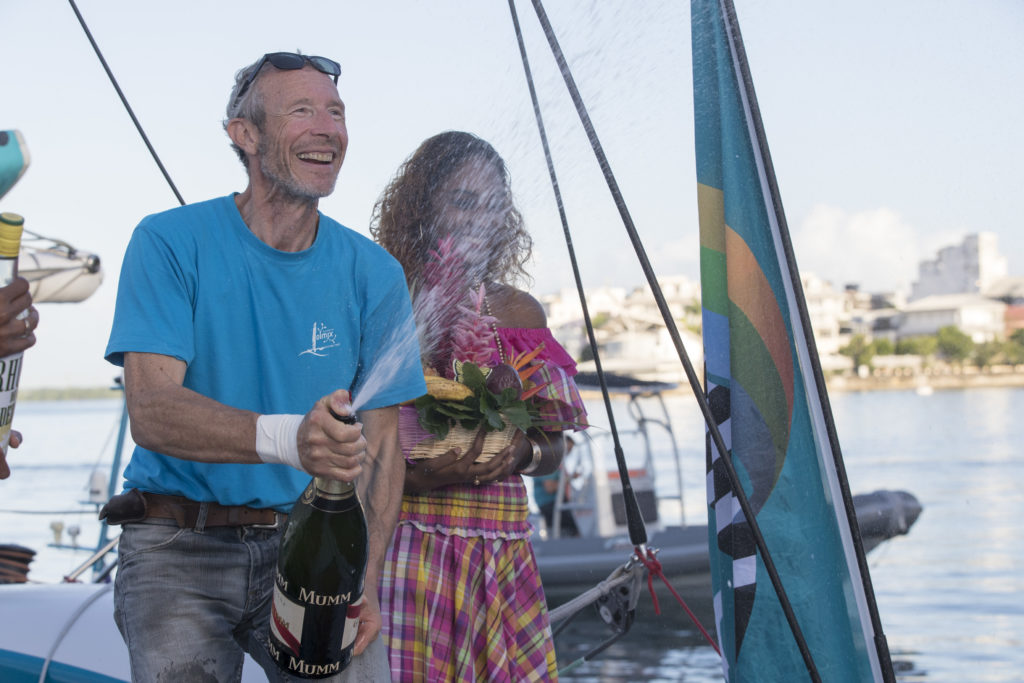 Antoine finished in 15 days, 21 hours and 15 minutes which sets a new record for the Rhum Multi class.
pic by Alexis Courcoux