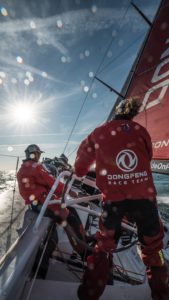 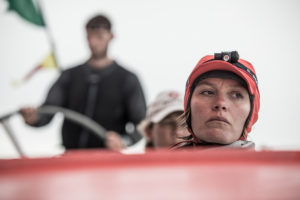 After a night of close-quarters tacking in the Celtic Sea into a 15-knot northwesterly breeze Dongfeng Race Team, which had been in second place in the seven-strong Volvo Ocean Race fleet, was the first to round the famous Fastnet Rock this morning.

Charles Caudrelier and his crew managed to overhaul former class leader AkzoNobel and were the first to ease sheets and begin the leg back to Plymouth with the wind now behind Dongfeng and set to freshen as they head towards the Isles of Scilly.

At 08h30 local time this morning Dongfeng had 246.3 miles left to sail to the finish off Plymouth and was two miles ahead of AkzoNobel, skippered by Simeon Tienpont, with the Spanish entry MAPFRE, skippered by Xabi Fernández, another half a mile astern.

On Dongfeng there were broad smiles and a thumbs-up from navigator Pascal Bidégorry as the crew worked the boat downwind for the first time in this 605-mile classic and with the famous Fastnet lighthouse now behind them.

“It’s good, rounding the Fastnet is always fantastic. It is a nice day, not a very windy one. It was not easy to be the first here. We have had a great fight with the Spanish and with AkzoNobel since the beginning of the race and then the whole fleet compressed in a really light spot,” said skipper, Charles Caudrelier.

“Now this is a long downwind phase and it will probably be very challenging, because the wind is very shifty and the other boats at the back will try something. So it will be very hard to stay ahead before we reach the Isles of Scilly. After that, things will be more clear.”

Marie Riou, who is taking part in the Rolex Fastnet Race for the first time, was also glad to round the rock in first place. “We passed the rock in daylight so I saw it and that was nice. I’m really happy to be here. Now, we have to go downwind and stay focused until the finish line. We overtook team AkzoNobel during the night so we are in first place which is good, but there is still a long way to go. But this is a good start and it’s good to be in first place, really exciting!”

CQS Is Also Round
Ludde Ingvall’s team on the super maxi CQS, rounded the Fastnet Rock at 06h25 this morning, second on line honours, and turned for the run back to the finish in Plymouth. They reported soon after rounding the famous rock, off the south west coast of Ireland, they were sailing at 14 knots in 15 knots of wind. 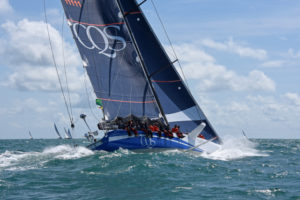 CQS on her way to the Fastnet Rock.

The breeze has been fairly consistent all night, and they have maintained their advantage over Nikata, and are looking forward to a fast downwind ride back to the finish.

Speaking from onboard, Kiwi helmsman Chris Dickson commented just before they rounded, “we’ve had a great night on CQS, we’ve got Nikata tucked away safely behind us, we’ve got the Fastnet Rock directly ahead, the sun’s about to come up, and we’re ready to put the spinnaker up and go for home.”

While CQS still trails the American yacht Rambler 88 in the battle for line honours, the conditions for the leg back to Plymouth look much more suitable for Ludde’s high tech boat, and they hope to start reeling in the Americans.

With the breeze forecast to stay in the north for most of the next 24 hours, CQS should be able to fly her massive spinnaker and deploy her foils, at least until they turn east at the Bishop Rock lighthouse.

The team will also have to weave their way through the whole fleet behind them, over 350 boats, still on their way to the rock. Once back in the English Channel there will also be two tide gates to negotiate, at the Lizard Head, and Dodman point.