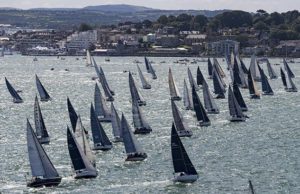 83 starters in IRC 3 made for a spectacular sight.
pic by Rolex/Carlo Borlenghi 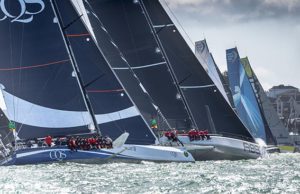 Magnificent conditions for the start of the 2017 Rolex Fastnet Race.
pic by Rolex/Carlo Borlenghi 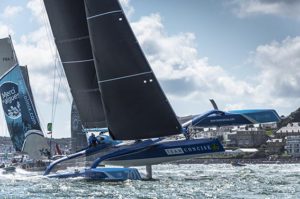 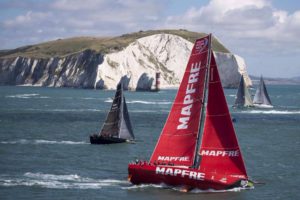 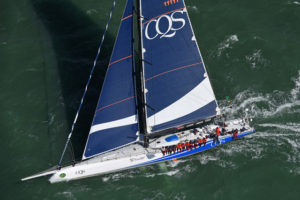 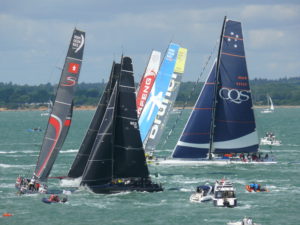 CQS on a jammed start line.

There were ‘classic’ conditions at the start of the 47th Rolex Fastnet Race. In brilliant sunshine and with brisk westerly winds gusting up to 20 knots, the giant fleet tacked up the western Solent before compressing through the usual bottleneck at Hurst Narrows. A record-sized fleet of 368 boats started the race, 12 more than two years ago, confirming the Rolex Fastnet Race’s position as the world’s largest offshore yacht race.

The first start got underway for the nine multihulls and within minutes, the blue three-hulled streak that is Concise 10 had pulled out a lead, frequently heeling to an alarming degree, just one hull immersed. By the time IRC One started Tony Lawson’s MOD 70, skippered by Ned Collier Wakefield, was already off Poole. Crewman Paul Larsen, who five years ago became the world’s fastest sailor setting a world record of 65.45 knots, reported Concise 10 was sailing under reefed mainsail and staysail. “We’re making 20 knots tacking past Poole and just dropping into the watch system. Glamour start conditions in the Solent. I can just see the next boats clearing Hurst Castle.” However Larsen warned that unless the wind freed up, there was little chance for them to break the multihull race record.

The multihulls were followed away from Cowes by the nine double-handed IMOCA 60s and twenty seven Class40s. Given the upwind conditions, the older, conventionally foiled IMOCA 60s were prevailing.

In the Class40s present championship leader Phil Sharp on board Imerys led past St Alban’s Head, but later there was little too choose with the British boat neck and neck for the lead in this incredible fleet with the Maxime Sorel-skippered V And B, Burkhard Keese’s Stella Nova, Benoit Charon’s LMAX Normandie and race veteran Halvard Mabire and Miranda Merron on Campagne de France.

The last to start were the largest in the IRC fleet, IRC Zero, including the line honours contenders George David’s Rambler 88 and Ludde Ingvall’s 100ft CQS.

Among the seven one design VO65s competing in ‘Leg 0’ of the 2017-18 Volvo Ocean Race, it was very close, with the Charles Caudrelier-skippered Dongfeng Race Team a nose ahead and making 12.3 knots but facing a threat from Team Brunel, skippered again by Dutch race veteran Bouwe Bekking, making 12.5 as the boats passed St Alban’s Head.

Dongfeng Race Team stormed down the western Solent with 2.5 knots of outgoing tide against 18-21 knots of south westerly wind, the Chinese team, skippered by Charles Caudrelier, secured their lead by expertly covering the rest of the tightly bunched fleet.

The two red boats, MAPFRE and Dongfeng Racing won the start but the Spanish team were held up by bad wind coming off Nikata, the biggest boat in the race at 115 feet. In fact, all the Volvo Ocean Race sailors were challenged by having to sail around the record 390-boat fleet in this 605-nautical mile offshore classic.

The Fastnet is the first offshore test for the teams that will take the start line of the Volvo Ocean Race on 22 October in Alicante.

“It’s the first time we are all going to sail offshore against the other boats so it’s important to see where we are amongst the other boats,” said Caudrelier. “It’s a good race to train, to start racing together.”

With sailing legend Chris Dickson of New Zealand at the helm, CQS made a great start to the Rolex Fastnet Race. The boat was powered up and going fast when the gun fired at the Royal Yacht Squadron to start the class for the biggest boats in the race.

CQS is one of 32 boats in Class Zero, the last start of the day, so the team on the boat had to thread their way through the 336 smaller and slower boats that had started before them, and by late afternoon only had two boats in their class ahead of them.

Speaking from on board the boat when they were an hour west of Portland Bill, crew member Michael Rummel said, “we have 20 to 22 knots of breeze, and we’re making between 11 and 12 knots hard on the wind, the conditions are a bit stronger than we had hoped for, but the wind is due to drop around midnight.”

Portland Bill is one of the critical promontories on the south coast of England that creates a tide gate, and getting past it in favourable conditions is a huge advantage. CQS didn’t quite get there before the tide turned against them, but tacked away from the coast to minimize the adverse current.

Ludde Ingvall, the skipper, said he was happy that they got out of the restricted waters of the Solent without any incidents, and CQS was now able to stretch her legs and settle into making up time on the boats ahead.

NOTE. It appears that the official race news feeds are clogged with so many people looking for info, that they are so slow and unreliable to get good material that the regular reports planned may be more sporadic than regular! But we will persevere.

NOTE. It appears that the official race news feeds are clogged with so many people looking for info, that they are so slow and unreliable to get good material that the regular reports planned may be more sporadic than regular! But we will persevere.

The race can be tracked via YB Tracking HERE