Review. The Art and Science of Sails 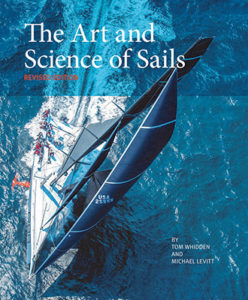 The subject of sails and sailmaking can be quite complex, but in this terrific revised edition of ‘The Art and Science of Sails’ authors Tom Whidden and Michael Levitt have done a superb job distilling the complexities into a narrative that we can all understand.

From the intricacies of how wind and water conspire to propel a boat forward to some of the more mundane aspects of sails, this book covers it all and in great detail. I cannot recommend it highly enough to anyone who wants to know more about that very important part of a sailboat, namely the sails.

Twenty six years ago the original ‘The Art and Science of Sails’ was published and it was a ground breaking book. Up until then the best book on the subject was ‘Sail Power’ by Wallace Ross and the most high tech that book got was cross-cut Dacron sail, so there was vast room for improvement. When ‘The Art and Science of Sails’ was originally published it covered all aspects of modern day sailmaking including valuable information on sail design and engineering, sail trim and how to choose the correct sail inventory for your purposes, but sailmaking is a vibrant industry and there have been numerous developments in the ensuing years. Who would have guessed back then that the America’s Cup would be raced in flying boats with solid sails?

The first thing that should give a reader any indication of the kind of book this is, would be the title. Sailmaking is as much art as it is science and the very first chapter of the book is a nod to the two men who did so much to advance the industry. I used to work for Ted Hood and can attest that he was indeed an artist. Ted would stand on the foredeck looking up at a sail, make some notes on his pad and then send the sail in for recutting. When it came back it was vastly improved yet none of us could see what he saw. At the other end of the spectrum was Lowell North who was, as the book correctly states, “bubbling with creative fire.” North was the first sailmaker to fully embrace the computer as a tool for sailmaking and we all know how far computer technology has come in the last few decades.

One of the most interesting chapters of the book is ‘The Science of Sails’; how indeed can a flimsy curved surface propel a boat almost directly into the wind? It seem unfathomable, but it’s true and Whidden and Levitt walk the reader step-by-step through the various stages of, as they put it ‘flying a flat plate’, to a complete understanding of aerodynamic theory. They then take this theory and explain how it translates into designing and engineering sails.

There is significant ink given to 3DL and 3Di sailmaking and for good reason. Building membrane sails on a full size mould completely revolutionized the industry and these days it’s not only the racers that want this kind of technology, as increasingly cruisers are seeking it out too. By being able to precisely lay fibres along the anticipated load lines in a sail meant that sails could be built lighter and stronger for the same stretch resistance. Incorporating exotic fibres such as carbon and Vectran into sailmaking further advanced things, and now blending different fibres into the same sail with each doing their own part all found their roots with 3DL.

The book ends with some of the more mundane aspects of sailmaking such as the basic parts of a sail and how sails effect each other when used together, in other words they explain ‘the slot effect’. If that’s the only part of the book you read you will most certainly become a better sailor, both as a racer and cruiser, but I urge you to read the whole book cover to cover like I did.

Sailors around the world spend an inordinate amount of money on sails, and without being disparaging many have no real clue how to use them. I can almost guarantee that your skills as a sailor will be vastly improved once you have read this book.