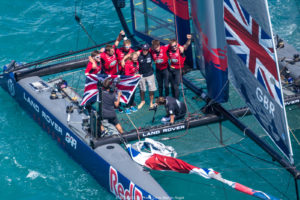 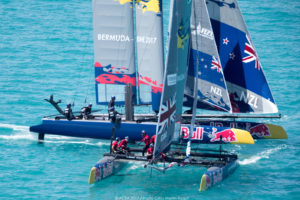 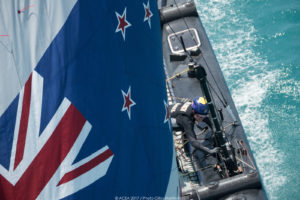 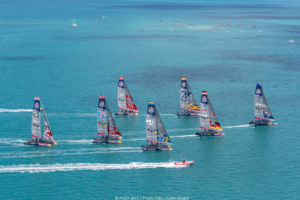 Creat racing for these up and coming sailors.
pic by ACEA 2017/Gilles Martin Raget 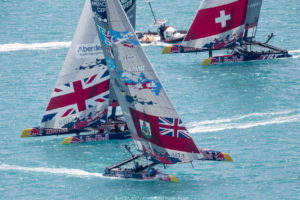 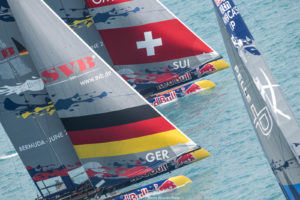 There was a last-minute upset for the title of Red Bull Youth America’s Cup winner when the British team clawed back from an almost certain defeat to wrest the title from the New Zealand youth team.

This victory must taste sweet for Sir Ben as he now has a squad of youngsters he can blood for the future – and youngsters with the sweet taste of victory to their credit as well. Many pundits feel that Sir Ban needed youth in his squad that bowed out of the America’s Cup race after a string of disappointing results in Bermuda.

The future for Britain in this form of racing appears to be good.

So, what happened out there?
Having headed into the climactic day of the Red Bull Youth America’s Cup in fifth place overall, defending champions NZL Sailing Team of New Zealand mounted a monumental comeback. The Kiwis looked to have successfully retained their crown after claiming a perfect set of race results on the day with three consecutive victories, while the leaders after day one of the Finals, Land Rover BAR Academy, had endured a difficult afternoon and were still on the course with the rest of the field, languishing in fifth place.

However, with the New Zealanders set to celebrate onboard their boat, incredible late drama conspired against the reigning champions. Land Rover BAR Academy clawed their way up to second on the final leg, including passing SVB Team Germany who hit the mark, to land the trophy. The British team’s eventual second place in the race proved enough to see them finish on 50 points, just two ahead of NZL Sailing Team in the final standings.

“We had some slightly bleak thoughts for a little while watching on in that final race,” conceded Land Rover BAR Academy skipper Rob Bunce, reflecting on the dramatic final race. “We were just praying for an opportunity from somewhere and then we saw the drama that was unfolding in front of us, that was our opportunity. It feels fantastic to be able to bring the trophy home with us.”

Bunce also revealed that one very important spectator, Land Rover BAR Team Principal Sir Ben Ainslie, was on hand to pass on his congratulations on the water after the final race.

Land Rover BAR Team Principal and Skipper, Ben Ainslie, on the team’s success, “We could not be prouder of the Land Rover BAR Academy winning the Red Bull Youth America’s Cup. All their hard work, commitment and dedication over the past 18 months has really come together on the water here in Bermuda. Today was incredibly tense, it is a strong fleet, but I have been really impressed by the team’s constant on-board communication, how they kept their cool under pressure and really delivered on the boat handling during the tricky conditions.”

“I’d just like to offer my personal congratulations to the British youth team for winning the Red Bull Youth America’s Cup today. This is a fantastic achievement,” said Jimmy Spithill, the two-time America’s Cup-winning skipper and helmsman of ORACLE TEAM USA, which is vying in this week’s America’s Cup Match racing.

“Look for the sailors you’ve seen here in this 2017 edition of the Red Bull Youth America’s Cup to be in the next America’s Cup four years from now,” Hagara stated. “These young talents are the superstars of the future, and after seeing the level of skill and competitiveness they’ve shown here in Bermuda, there’s no doubt they’re going to take the sport to the next level.”

Land Rover BAR Academy Skipper, Rob Bunce:
“The strategy was to do the same as yesterday and get off the start line clear. If we got three results in the top four we knew we could come away with a good result but unfortunately, we had an OCS and a penalty in the first start.

“I can’t put into words how much effort everyone put in on the race course. The amount of places we managed to gain in all the races is amazing. In the last race of the day, we knew to finish first overall we could only have one boat in between us and New Zealand and most of the way round there were two or three boats in between. We saw at that last gate, Artemis Youth Racing (Sweden) and SVB Team Germany (Germany) had a battle on and one of them got hooked on the mark and the other suffered a penalty and that was our opportunity to get in front of Team Tilt (SUI) and hold out Spanish Impulse (ESP) to have the reach of our lives! To win here in Bermuda is amazing.”

Land Rover BAR Academy Strategist, Annabel Vose:
“Going into the final race we knew that New Zealand Sailing Team were our main opposition so we just wanted to finish within the top three, which we had been doing most the of the day and throughout the regatta. We wanted to go in and have a simple start, keep it clean and race our own race. I don’t know if the pressure got to us a little bit but we didn’t pull off the start that we wanted.

“Although we didn’t have our best day today, I think all the effort we’ve put in throughout the year just meant that we could pull together as a team and get the results that we needed to take the win and we are absolutely thrilled by the result!”