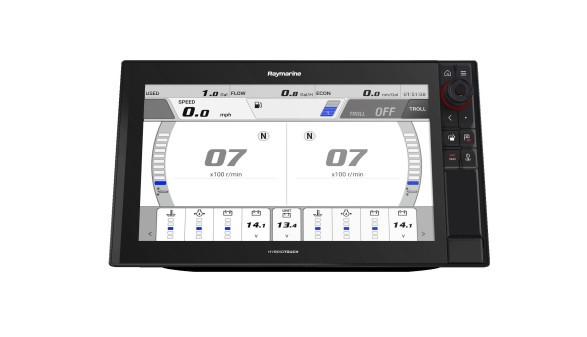 Raymarine’s Axiom MFD series can now display the instrumentation for up to 4 Yamaha outboard engines on a single display.

FLIR has announced the addition of Yamaha Command Link and Command Link Plus integration into Raymarine’s family of Axiom® multifunction displays. This new capability is one of many new features introduced with the recent release of the LightHouse Annapolis 3.9 operating system for Axiom.

Certified by Yamaha, Raymarine’s Axiom series of multifunction can now display the instrumentation for up to 4 Yamaha outboard engines on a single display. The Axiom engine data display echoes the look and feel of Yamaha’s digital instrument displays and is compatible with a wide array of Yamaha outboards installed on existing boats as well as on new boats.

Home to thousands of boaters, steeped in rich maritime tradition and a magnet for generations of sailors, powerboaters and fishermen, the coastal city of Annapolis is the inspiration behind the name of Raymarine’s latest LightHouse operating system update. Beginning with LightHouse 3.9, Raymarine is adopting alphabetical names for LightHouse OS updates that pay homage to the great boating destinations of the world.

Whether you sail, fish or cruise, LightHouse 3 Annapolis unlocks powerful new features and functionality in your Raymarine Multifunction display. As with every Raymarine LightHouse operating system update, downloads are free and easy HERE