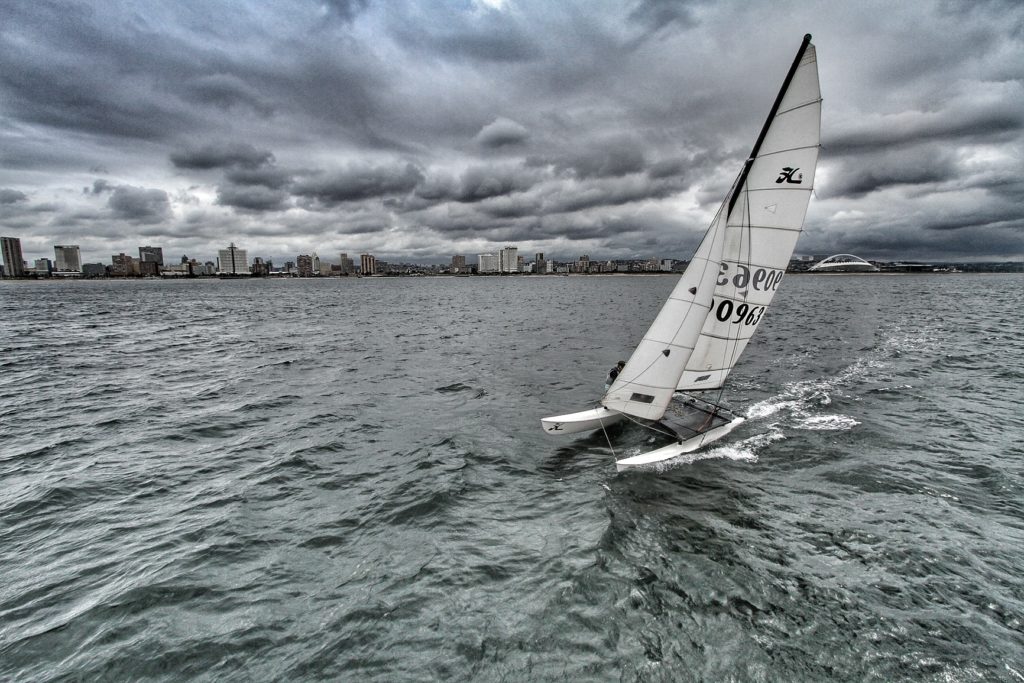 Heading past the bridge boat, schoolboys Jethro Brophy Tintinger and Braeden Royale cruise past on their way to the weather mark during the Hobie 16 Regionals that took place during the Easter Regatta hosted offshore by Point Yacht Club.
pic by Sophie Thompson

The father and daughter team of Peter and Sarah-Ann Hall were crowned KZN champs this weekend at the Easter Regatta hosted by Point Yacht Club.

The pair racing in the Hobie 16 Regionals notched up five wins, a second, a third and a fourth in the nine races held offshore of Durban over the three day regatta. Their one race discard was a ninth position in the first race on day two where they battled with a rudder issue.

“Yeah we had a bit of a set back with the rudder failure, but we managed to bounce back nicely. Sarah-Ann and I were pretty zoned in from the start, concentrating hard on the water and every opportunity we had, we took which fortunately paid off for us! Mainly we just made sure we kept Garth Louden behind us – that guy is slippery on the water” the proud Dad said.

Continuing, he said, “The last time Sarah-Ann and I sailed together was in August last year up at the Northern Vaal Provincials. We managed to win that one too so we are having a good time on the water. Next up for us is the Hobie 16 Nationals in Port Elizabeth at the end of the month and then I will swop out onto the Hobie 14 for our Provincials later this year and then the Nationals after that. The family will also be heading to Greece for a sailing holiday mid-year, which we are all looking forward to.”

Concluding, Hall stated, “This weekend was a great event, fun from start to finish. The wind was perfect on the first two days, the flat seas made for some fantastic sailing. Offshore of Durban really is a superb sailing venue, and we are lucky to be able to call this home!”

Hot on the Hall’s heels were two teams. The local combo of top international Hobie sailor Garth Loudon who was breaking in new crew, Liam Fennessy and upcountry sailors Ewald Erasmus and Brandon Wijtenburg. Both teams finished four points behind the Halls with Loudon and Fennessy being awarded silver with higher scores throughout the regatta. The two PYC sailors earned two firsts, two seconds, four thirds and their discard race, an OCS. Erasmus and Wijtenburg were on the podium for all but two races. A consistent regatta had them score a first, five seconds, a third, a fourth and their race discard was a sixth place.

In the small fleet, the stand out performance would have to be the ‘ballie blue boat’ with Hugo Peligrini and Bill Ellens, the most experienced sailors on the water. Ellens even managed to get out on the trapeze in every single race. The oldest sailor in the fleet, 76 year old Ellens stated after the prize giving, “Durban is definitely the finest sailing venue in South Africa, what great sailing we had this weekend. The old ballies staggered through. We worked out we have a combined total of 186 years, my 76, Hugo’s 71 and our trusty steeds 40 years. Anything is possible if you really want it!”

Out of the 12 teams competing, three were from outside of KZN. Travelling down with Erasmus and Wijtenburg were fellow Vaal Dam sailors Mike Goodyer and his daughter Jennifer, they were racing on the youngest boat in the fleet, having just imported it from Holland after the last World championships, unpacking it just in time for this event. The Goodyers finished fifth overall. Goodyer senior enthused, “Great regatta everyone, thanks! Well worth the travel! Durban flat seas and steady winds rock!”

Traveling up from East London, Mark Gale and Chanelle Herselman had a challenging time offshore, snaring five lures on their hull in the first race from a vessel obliviously trawling through the race track.