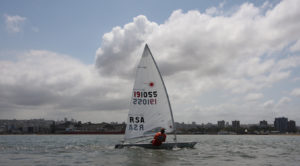 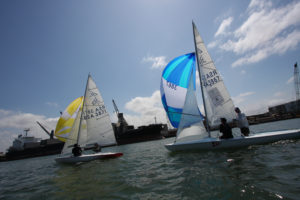 Cruising down to the bottom of the course Dr Craig Campbell and Nhlanhla Phakathi stay slightly ahead of Myles White and Estelle Buys on their Flying Fifteens during the Jonsson Cup Pursuit Race hosted by Point Yacht Club.
pic by Sophie Thompson 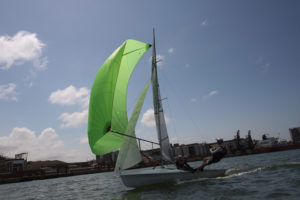 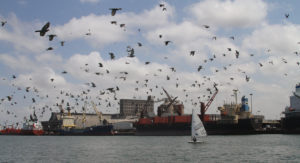 Leading lady – In full flight, passionate Laser sailor Hannah Fokkens took time away from her studies to participate in the Jonsson Cup hosted by Point Yacht Club. She is pictured with a flock of pigeons flying above her near the grain terminal at the bottom of the Maydon Wharf channel. The matric student who led for majority of the race, was reeled in with 500m to go by duble Olympian Dave Hibberd, who is in Durban having stopped off on his circumnavigation.
pic by Sophie Thompson

A highly competitive fleet squared up against each other in the historic Jonsson Cup Pursuit Race hosted by Point Yacht Club in Durban Bay on Saturday, with a photo-finish revealing the ‘would-be’ winner.

Long deliberation after the event, the Rear Commodore of Dinghies Myles White announced, “As a result of the issue with missing harbour marks and the laid mark, the completed race has been declared invalid and will be re-sailed, provisionally this coming weekend.”

Due to the storm two weeks ago, a number of harbour marks were missing or incorrectly repositioned, having been taken out by stray floating vessels that had broken loose. The race course set prior to the storm, required the fleet to round certain harbour marks, which was discovered during the race weren’t in position, or had been taken out completely. The result being a confused fleet not able to sail a true course, thus resulting in the re-sailing of the event.

Second place, Hibberd, who competed in the Atlanta and Barcelona Olympics, has not set foot on a Laser since 1997. Former South African sailor, Hibberd and his family are busy circumnavigating the globe on their catamaran, Cool Runnings and are in Durban for a few weeks. Hibberd, who got pipped at the post, had a beaming smile the entire race, stating after the race. “It was so nice to see my old mates and meet some new friends! That was my first time in a Laser after 20 years. What a blast!”

Third across the line, matric student Hannah Fokkens from Danville Park Girls High, led for majority of the race before being reeled in by the more experienced Hibberd. The two Laser sailors had a tacking duel as they sprinted upwind towards the finish line. Hibberd, managed to shake Fokkens off, but was surprised by a late surge from Lipton Cup team mates sailing together on a Flying Fifteen. Anthony MacMillan and Luke Wagner had a quiet race, gently leap frogging their way to the front of the pack.

Handicapper, Justin Butler had a busy time leading up to the race coordinating 25 starts for the smorgasbord of dinghies. Race Officer for the day, Kevin Bingham had a busy time starting off the different classes, getting off the slower boats first with the faster boats leaving last.

On the water, a variety of newbie sailors shared the race track with legends. This weekend, Match Racing was scheduled for the two-handed Flying Fifteens, but in the interest of this historically beautiful trophy that is well worth winning, the Match Racing looks to be rescheduled for the re-running of the Jonsson Cup.