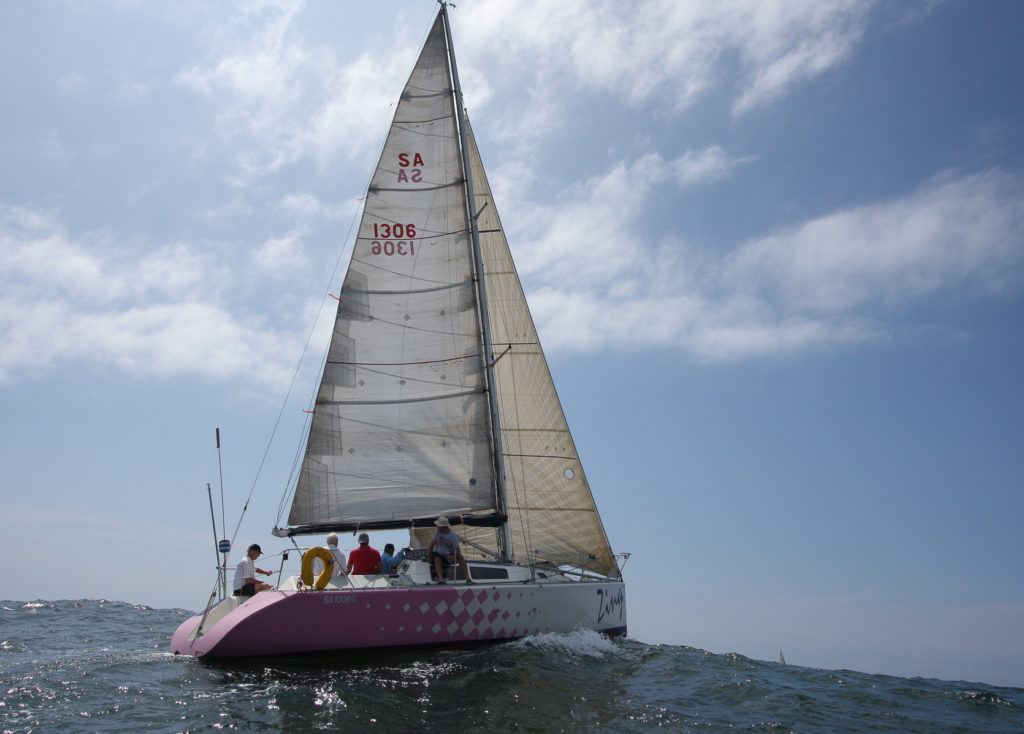 A zinger of a performance by Gavin Smith helming the yacht Zing, matched the sweltering weather offshore of Durban during the first day of the Jonsey Sprints hosted by Point Yacht Club.

Smith earned himself line honours in the monohull class in all three races. In the first race, the longest on the day, Smith and his crew got off to a fantastic start and set a decent pace to the top mark. On the rounding, the team faltered a bit hoisting the kite for the downwind leg, and then opted to drop the spinnaker gliding down to the bottom mark with their jib and mainsail. His marginally slower pace didn’t lose him any ground, and his team finished two minutes ahead of second placed Nhlanhla Phakathi sailing magnificently on PYC Challenger.

Race two of the Jonsey Sprints was shortened to one lap, with latecomer Bill Ellens on his trimaran Magic Dragon rounding first, with Zing hot on his tail. Ellens misunderstood the shortened course flag and bolted up for his second lap. Zing tacked and made her way for the line, fortunately the zippy trimaran noticed the fleet were making their way for the finish and managed to tack on time making his way to the finish, not losing too much ground. Ellens crossed the line 27 seconds behind Smith, while Phakathi crossed the line in third, 13 seconds behind the tri.

In the final race of the day, Magic Dragon edged to the front after a sluggish start and boldly stayed ahead of the pack. Ellens finished the full two laps in a stylish 48minutes 26seconds, 8 minutes ahead of the first monohull, Zing. Changing gears, Refeloa Zililo and his team on iThemba crossed the line in third place, 22 seconds behind Zing.

There was a superb tussle in the one design class, with three L26s on the water in training for the most prestigious sailing event in South Africa, the Lipton Cup. Phakathi took the L26 honours twice with Zililo taking the L26 win in the final race. Hannah Fokkens skippering the third L26, SLFC also finished well throughout the day, notching up two fifths overall and a fourth in the last race, where they were 45 seconds behind Zililo.

Phakathi on PYC Challenger disappointingly had a bad start in the third race and battled to recover, ending up sixth overall. The less experienced team on iThemba ended their day with two thirds, and a fourth. The first race of the day had the three boats finish within 6minutes and 2seconds of each other. In the shortened race, the three Ls pushed each other hard, all crossing the line within 100 seconds of each other and in the final race the time gap was impressively just under two minutes.

Joining the big boats on the day, half a dozen Hobies came out to stretch their legs ahead of the Easter Regatta that incorporates the Hobie 16 Provincials and an open Hobie class.

The Jonsey Sprints concludes on Sunday 25 March. Next up on the racing calendar is the Holburn Class Champs on the 17 March, after racing Charlie’s Pub will be hosting a festive St Paddy’s on the Bay.