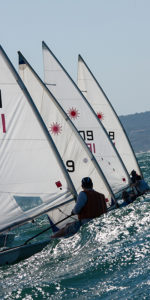 A formation of Lasers head up to the top mark. This weekend (16 – 18 June) sailors will be taking to the water for Point Yacht Club’s Hobie 14 Nationals incorporating the Laser and Flying Fifteen Regionals offshore of Durban.
Pic by Sophie Thompson

Dinghy sailors from around South Africa head to Durban to compete in the upcoming Hobie 14 Nationals incorporating the Laser and Flying Fifteen Regionals over the long weekend.

The three-class regatta hosted by Point Yacht Club will be taking place offshore of Durban with three days of hard-core sailing expected in gorgeous winter conditions. Leading the team of Hobie sailors representing the Point Yacht Club is Garth Loudon, who is keen to notch up the title ahead of representing South Africa at both the Multihull and Europeans 2017 in the Netherlands and the World Hobie Cat in Germany.

Joining firm favourite, Loudon on the water is Peter Hall who recently claimed the Hobie 14 Regional title offshore of Durban over Easter. Hall, together with Loudon and fellow club members Dylan Albert, Jethro Brophy Tintinger and father-and-son team of Justin and James Butler will all be travelling over to the Netherlands to participate against some of the finest Hobie sailors in the world.

Loudon said, “The Hobie lads have been quietly getting in as much training as possible as the top guys have a busy patch ahead internationally! The Durban boys have been spending a lot of time training, joining the bigger keelboats for offshore racing, which has been fantastic. We have a fantastic morale at the beach site, but we are expecting a lot of out-of-towners hoping to wrestle the trophy back to their club but we will work hard on the water to keep the title here.”

Sharing the race track are the monohull classes of Flying Fifteens and Lasers. Confirmed entries for the magnificent Flying Fifteen’s include multiple championship winners’ Patrick Harris and Jeremy Kriek, together with highly competitive Gregg Hurter on the helm of his small keeler, Ffreya. Rear Commodore of Dinghies, Myles White on his own craft, will have the highly talented Charlotte Marshall looking after the sharp end of the boat this regatta.

In the Laser class, Hannah Fokkens will be taking time out from her exams to compete on the smaller Radial Laser. Campbell Alexander will be taking to the water ahead of the upcoming Laser Master World Championships in Split, Croatia. Henri Frencken will be joining Alexander, both offshore of Durban and in Croatia where they will wave the local flag proudly. Out-of-towner, also getting water time ahead of the Masters in Croatia is Cape Town’s Lance Burger who last raced in the Flying Fifteen Nationals with his daughter offshore of Durban in December. National champion, Alistair Keytel will be looking for bragging rights of claiming victory in the KZN provincial against the locals.

Myles White stated, “The entries are looking slim at the moment, but we are expecting a surge at the last minute with a number of big names joining us on the water! We are expecting some good racing offshore, with Race Officer Kevin Bingham setting the courses for us.”

Bingham will have quite a task on his shoulders setting a worthy course for the faster, larger catamarans and the more manoeuvrable monohulls. A maximum of 12 races can be sailed offshore, with racing starting at midday on Youth Day.

Point Yacht Club will be hosting the upcoming Hobie 14 Nationals incorporating the Flying Fifteen and Laser Regionals from 16 – 18 June offshore of Durban.