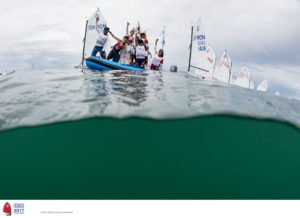 On top of the world?
pic by Matias Capizzano 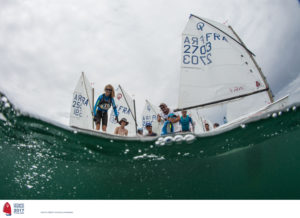 … or down in the dumps?
pic by Matias Capizzano

After not qualifying for the Team Racing series over 2 days, the RSA team was dealt another blow after yesterdays racing was abandoned due to no wind. So they have not raced for 3 days – very frustrating when you are at a World Championship.

The second half of the individual series of the Optimist World Championship was abandoned after a midday rainstorm followed by a fruitless four hour wait on the water for wind to return. Most participants accepted the situation as out of the race committee’s control, but, in retrospect, wished they had waited just a little bit longer to call it a day.

Sailors seemed to enjoy the chance to get to know each other better onshore and were accepting of the situation at sea.

Hopes are the winds will return to get racing back on track on Wednesday for the final two days of the record-breaking event, which sees 281 sailors from 62 countries competing this year.